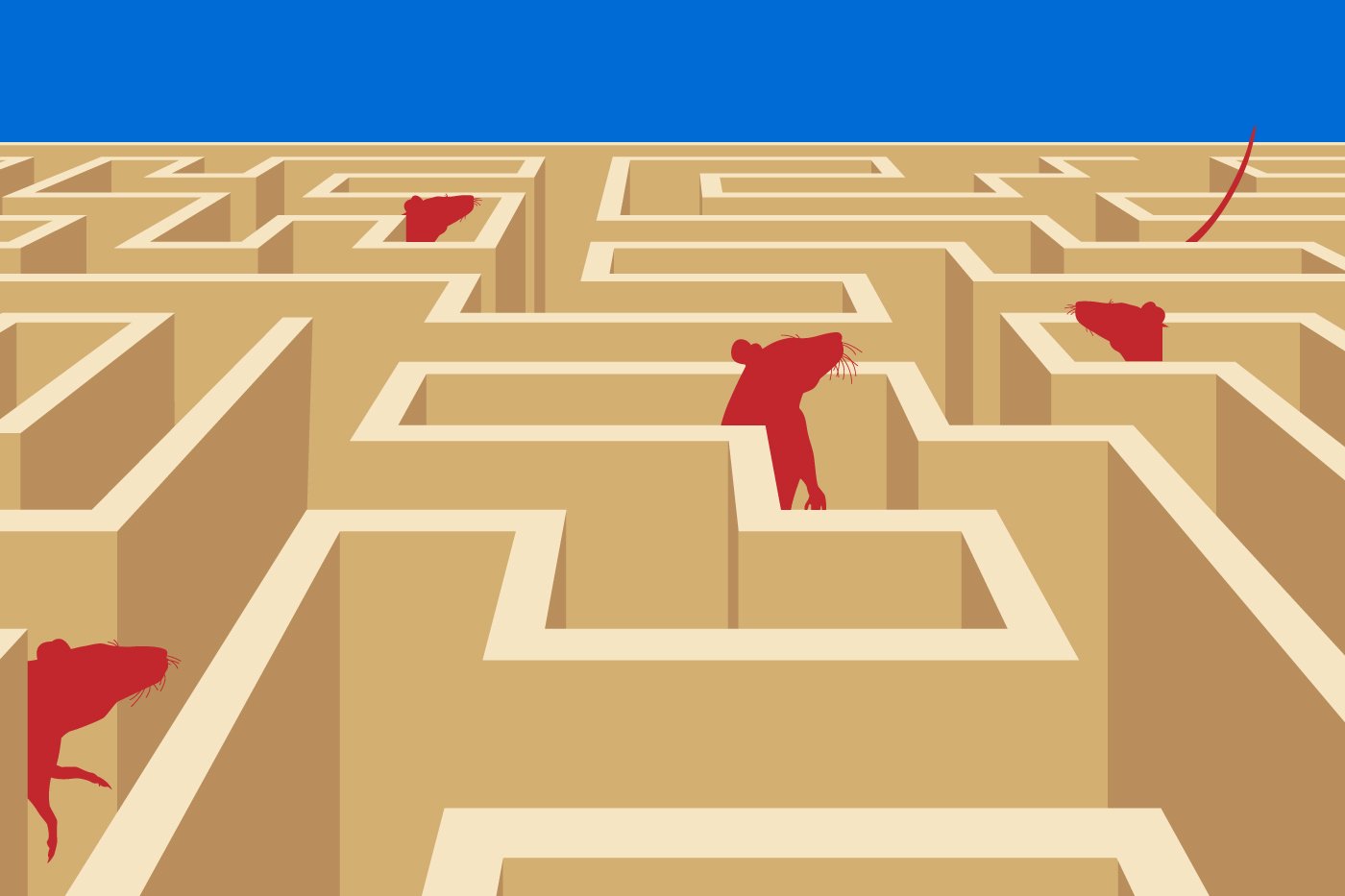 We give the office too much credit. Nearly 40 years after researchers debunked architectural and environmental determinism, business papers and digests are filled with stories about how great offices can make employees more productive and innovative. Whatever impact the office has is limited. Years of research show the recipe for employee productivity is based on trust, communication, appreciation, and compensation, not office design.

Cleverly designed office space is nice, we can all appreciate top-notch aesthetics, but we have to stop acting like building a prettier maze will help the mouse find the cheese faster. The discourse around collisions, open offices, and flexible workspace distracts from the meaningful conversation that actually leads to productivity improvements. It may make managers and owners feel better about their reasoning for requiring people to come into the office, but it does not further our understanding of the office’s value. It’s time to start taking a more individualized approach to what’s become the defining trend in the American workforce. People make offices more productive and innovative, not design.

The case for the office is simple. Yet we write overly complicated takes about how being in proximity to your peers and co-workers can produce ‘collisions’ and ‘innovation,’ despite there being no evidence to suggest that’s the case. Being at work isn’t about being with your co-workers, it’s mostly about being with your boss. Oversight works best when you can see people working. Being physically present is one of the oldest, most important forms of accountability. There’s evidence to show that in the presence of a boss or direct manager, people work harder, stay on task longer and even have lower quit rates. It’s not because workers are under constant surveillance.

A study by Standford University professor of economics Kathryn L. Shaw shows good bosses increase productivity with coaching and strategy insight. Shaw’s findings show the impact of a good boss outweighs the impact of good peers. The flip side is also true. Bad bosses hurt productivity and increase turnover. Being physically present at the office helps your boss be a more effective boss, offering guidance and direction more frequently than then they can remotely. Open office designs are as much about sightlines as they are about collisions. That’s not a bad thing. Visibility and distance are key determining factors in informal interactions. Being physically close and within the eyesight of a first-line manager leads to more informal interactions between managers and employees, where bosses can help. “A worker’s productivity on the job is determined by a set of factors: personal ability, learning over time, the quality of the current boss, the quality of the previous boss, whether the current boss is a good match for the worker, and the effects of peers,” Shaw wrote.

Shaw’s research is more confirmation that the ‘Spontaneous Encounter Theory’ often cited by managers as the reason we need offices is boloney. Some of the largest corporations in America have created office spaces and workflows trying to tap into some mythical force of productivity created by people being in the same place. The opposite has happened. The New York Times quotes research from Harvard Business School professor Ethan Berstein, who found contemporary open offices led to 70 percent fewer face-to-face conversations because employees didn’t find them productive, so they kept headphones on and avoided each other.

It makes no sense to base conversations around worker productivity on theories with no evidence when we do have solid evidence for what actually works.

“Informal interactions have sort of a bell curve,” Margaret Serrato, Workplace Strategist at AreaLogic Workplace Strategy said. With a Ph.D. in architecture and a master’s in environmental psychology, Serrato has been studying the relationship between office design and collaboration for years. “Zero visibility produces no opportunity for interaction, going up the curve the frequency of interaction goes up. We found a point where you have too much visibility, informal interaction starts to go back down. Spaces that are too open become overwhelming. It’s like sitting at the gate at the airport, you’re surrounded by people but you want to be isolated.” Collisions and informal innovation do happen but they are not quantifiable. It makes no sense to base conversations around worker productivity on theories with no evidence when we do have solid evidence for what actually works. The value of the office is best understood through the lens of quantifiable metrics, rather than the tea leaves of innovation optimism.

A great office can’t overcome a bad boss. Focusing the conversation around physical space is a way for bosses to avoid responsibility for creating rewarding work environments and cultures that actually boost productivity. No one quits a job because the office is bad. Working in the White House is one of the highest honors, but the physical space is drab. People quit because of bad bosses. People are quitting rather than go back to the office. I don’t think it’s entirely accurate to say they’re quitting because they don’t agree with blanket work policies, they’re quitting because they don’t want to work for a boss that doesn’t understand why they need to work from home or doesn’t trust them to do so. Designing new rules for American workforces requires a different kind of boss, not a different kind of office space.

The premise that informal interactions create innovation and productivity is not supported by evidence. Informal interactions can be as simple as asking about someone’s weekend, whether they saw the latest episode of Game of Thrones or how their kids are doing. They help with office morale and culture, but are they producing innovation? It’s impossible to say. If I think of an idea at my desk and turn to my coworker to discuss it, did the informal interaction create that idea? Evidence shows 70 percent of informal office interactions are between two people at a personal desk, meaning one person is actually being distracted from whatever task they were doing to have the conversation. “The hallway interaction sounds good but there’s no evidence to back that up,” Serrato said. “There’s a lot of myths out there, you have to wonder how much is based on people relying on the old way of thinking and how much is based on evidence. I think we might need to let go of the idea that informal interactions produce innovation.”

Serrato sees the discourse around collisions and interactions as the latest iteration of architectural determinism. Debunked in the 80s, architectural determinism is the idea that space and your physical environment can make you behave differently. Once in vogue, the school of thought produced some of architecture’s most questionable designs, like conversation pits and housing row projects. Social research debunked the theory. Boiling down complex issues to a limited set of causal factors is bound to be outright wrong or at the very least misleading every time. You can’t force people to do something based on what type of space they’re in.

For the sake of argument, assume informal interactions do generate innovation. Does that interaction have to be face-to-face? Remote work is full of informal interactions. I’d argue informal interaction is actually easier when working remotely. Sending a message on Slack is faster than walking over to someone’s desk and the recipient can check the message when it’s most convenient for them, instead of a coworker barging in. Plus there’s a record of what was said. How many informal ideas were forgotten or never followed up on because someone didn’t write them down? Factoring informal online communication into team dynamics and workflows is entirely lost in the conversation. If innovation and productivity are the real goals here, it seems we should be encouraging more remote work, not less. It’s not that simple either.

We can have a conversation about the value of the office, but we can’t base it on projections. Too much of the conversation around why we need offices is sugar-coating, trying to distract people from the real reasons that give the office its power. Office design isn’t about making people more productive. Office design it’s about making people feel better about being in a place where their boss can check in on them easily, its about having a place that people want to go, its about the personal connections and interactions that collectively make up company culture. That’s fine to admit. There’s much more evidence around bosses improving productivity than there is about offices spaces or spontaneous interactions. It’s better to embrace that somewhat ugly truth than persist in this world of productive hustle culture fantasy. Blue-collar workers are under no such illusion.

As Charlie Warzel, author of the forthcoming book Out Of Office wrote, “The Offices Are Good/Bad discourse misses and obscures the real point of the debates around the future of work … It is fundamentally a debate about worker power and autonomy — and about who gets a say in designing the new rules that will govern our working lives…or whether we decide to design new rules at all.”

Understanding this monumental shift in the American workforce will come down to bosses understanding their employees. Some extroverted people thrive in offices, some introverts work best at home. Teams need to meet to collaborate on physical projects. Isolation is best for some types of work. The complexities of modern work, increasingly driven by online collaboration like Zoom, Google Docs, and platforms like Slack or Teams, means blanket work policies don’t fit anymore.

I’ve been working from home for the past five years, I plan to work from home for as long as I’m able. America’s collective remote work experiment has been fascinating to witness and report on as a full-time remote worker myself. For years you’re an outsider looking in, then overnight, practically everyone is forced into your world. You watch as friends and family members run headlong into the same issues you learned to deal with years ago, discovering the same benefits and setbacks. Suddenly you’re the expert, people say they don’t understand how you do it. I reply I can’t understand how anyone works in an office. The hours at home may be longer but they’re less draining. Instead of ticking away the clock until I can go home and fulfill someone else’s needs other than my boss’s, I can take small moments throughout the day to take care of things outside work. A load of laundry, setting out something to thaw for dinner, having my own toilet. For me, the benefits of working from home accrue in small, meaningful ways. With a formal office set-up and without kids, working from home works for me. I would never say it can work for everyone.

The smallest bit of human intelligence tells us what works for someone doesn’t work for all, people are complex and diverse. Why do we continue to attempt to make blanket statements about the value of the office like we’re all the same type of person? Every good manager learns to adapt their communication and oversight style, tailoring it to each person. Remote work isn’t a company policy problem to solve through edicts, it’s managerial problem dealt with through communication and honesty. Giving employees space so they can meet their own needs will do more for productivity than a ping pong table. If you don’t know what your team is doing, where they’re doing it is not the issue. Good managers that respect their employees and promote each individual’s unique well-being will engender the type of trust, appreciation, and communication that actually makes employees more productive regardless of location.