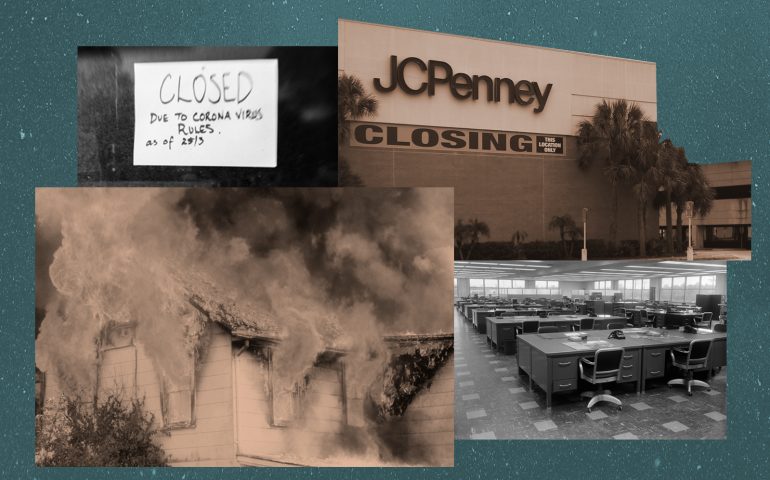 Worst of the Worst: The Real Estate Disasters of 2020

The pressure on real estate was relentless this year as the pandemic took down struggling sectors — and some healthy ones, too. Except for a few blessed sectors, such as industrial space (hello, Amazon!), fiascos were unavoidable.

To explain the catastrophe that was 2020, we picked 10 of the biggest real estate disasters to highlight.

Say this for the Partnership for New York City: It is no cheerleader.

The business group released surveys laying out in stark detail how empty city office buildings are. Attendance has risen — from horrendous to merely abysmal. First 8 percent, then 10 percent, then 13. President Donald Trump called Gotham a “ghost town” and his lie trackers didn’t argue.

But every office market struggled as the virus surged and work-from-home proved productive and popular. Dallas barely has 4 in 10 office workers showing up, but guess what? It’s the No. 1 market in the U.S.

“We need to get through a very difficult point now,” said Anthony Malkin, chairman and CEO of New York office REIT Empire State Realty. “We probably won’t see the bottom until the first quarter of 2022.”

The restaurant business began 2020 stronger than ever. Then came a perfect storm: a deadly virus that spreads like wildfire when people gather indoors without masks. A month later New York limited service to takeout and delivery, triggering mass layoffs.

Reopening has been marked by caution and reversals, and as of October, 88 percent of NYC eateries still could not pay full rent. A month later, 54 percent statewide said they would likely not survive another six months without federal relief.

The experience has been similar elsewhere, including L.A., where even outdoor dining was banned to tamp down a second wave.

A Penney for your retail chain

For brick-and-mortar stores, the pandemic piled on to a retail apocalypse triggered by the e-commerce boom. Shutdowns and infection fears accelerated online shopping’s gains, and 25,000 stores were expected to close as a result of Covid.

Retail giants were among them: J.C. Penney filed for Chapter 11 in mid-May and has since closed 150 locations. (Simon Property Group and Brookfield Property Partners are now trying to salvage it.)

Other retail bankruptcies included Neiman Marcus, Ascena Retail Group and GNC, while many other stores, including Macy’s and Gap, pulled out of malls and pared down their store counts. Home improvement stores such as Home Depot and Lowe’s did thrive in 2020, but for the foreseeable future, it’s Amazon’s world.

Fire in the whole

Covid vaccines will solve many of real estate’s problems in the next year or two, but not the wildfires that have increasingly plagued the West Coast in recent years. And this fire season was the worst one yet in California.

Unfortunately, it is not clear what will keep the seemingly annual blazes at bay. Global temperatures will continue to increase, fostering conditions that put huge swaths of California, Oregon and Washington at risk. Some homeowners are seeing annual fire insurance premiums rise to tens of thousands of dollars, if they can get a policy at all.

One strategy would be to return large, fire-prone areas to nature, concentrate development in urban areas and relocate millions of people, something the real estate industry, especially in California, has never been inclined to do, let alone done.

When shaky sectors began to crumble under the pandemic’s weight, that meant trouble for New York’s oversaturated luxury condo market and the developers who created it. If one firm has emerged as the poster child for big bets and bad timing, it would be HFZ Capital Group.

HFZ has faced a reckoning across its multibillion-dollar Manhattan portfolio, with $300 million in collections piling up from its investors, lenders, contractors and other vendors. Sales have dragged and construction has stalled at the XI, its flagship project along the High Line. Making matters worse, the firm’s principals are personally liable for some loans.

While HFZ may be the first big Manhattan developer at risk of losing it all in the pandemic, it is far from alone when it comes to financial woes. Slow sales and a tight market for financing have pushed a number of major projects to the brink of distress and in some cases into foreclosure auctions.

And the supply problem shows no signs of dissipating. Unsold new-development units in Manhattan will take 8.7 years to sell, according to appraiser Jonathan Miller of Miller Samuel.

Hotels are hurting like never before, so picking the hospitality sector’s worst fiasco of 2020 is like shooting fish in a barrel. But some fish are bigger than others. In one of the largest real estate deals undone by the pandemic, plans by Chinese insurer Anbang to sell a $5.8 billion luxury hotel portfolio collapsed as the coronavirus crushed the hospitality sector.

Not that it mattered in the end: In allowing Mirae to terminate the deal, a judge noted that contract terms required Anbang to operate the hotels in the “ordinary course of business” — which the pandemic had rendered impossible.

Early this year, Yoel Goldman’s All Year Management was lining up a pair of big deals to alleviate the Brooklyn developer’s cash flow problems: a $675 million refinancing for its Denizen Bushwick luxury rental complex, and a $300 million-plus multifamily portfolio sale. Then the pandemic struck.

The portfolio deal seemed to fall through in May, then was renegotiated in July, but the buyers — led by investor David Werner — missed a deposit in September. Meanwhile, the refinancing deal earned provisional ratings from a ratings agency, but that loan didn’t close either. Things came to a head in November when All Year skipped a payment on its Tel Aviv-listed bonds and postponed its financial reporting, sending its bond prices plunging.

The firm is now in default on numerous loans, and the mezzanine lender on its prized Denizen Bushwick property has scheduled a UCC foreclosure sale for February. And on the final day of the year, it was reported that All Year defaulted on a $66 million loan for a property in Gowanus and, having failed to file third-quarter reports and make bond payments, would be delisted from the Tel Aviv Stock Exchange.

Take these jobs and…

More than five years after unveiling its plans for a $1 billion commercial hub, the Industry City development team withdrew an application that would have allowed more retail, academic and commercial space, and instead will pursue permitted uses, such as a last-mile distribution center.

Local Council member Carlos Menchaca and other elected officials in Brooklyn opposed the project, arguing that its thousands of new jobs would accelerate gentrification and displacement in Sunset Park. Arguments that the city desperately needs jobs and tax revenue did not move Menchaca, who — far from being chastened — announced his candidacy for mayor.

When shutdowns crippled the economy, landlords braced for an eviction moratorium of perhaps three months. Instead, evictions have been on hold for more than nine.

After being peeled back slightly over the summer, this week the ban was broadened and extended until March 1, with an additional two months for tenants who declare hardship. Landlords say lawmakers are encouraging nonpayment of rent, which could cost them their buildings.

Tenants and their lobbyists will try to carry their political momentum into fights next year for taxes on second homes, universal rent control and canceling rent altogether.

It’s been a difficult year for many in real estate, but especially for Bob Zangrillo. An initial partner in the multibillion Magic City Innovation project in Miami, Zangrillo was charged in the college admissions scandal dubbed Varsity Blues. Zangrillo is also battling allegations by the Federal Trade Commission that a company he chaired was running scam websites that mimicked government sites. Zangrillo is fighting all of the charges, but other developers have already distanced themselves from him. In February, Avra Jain said Zangrillo is out at her Miami River project.