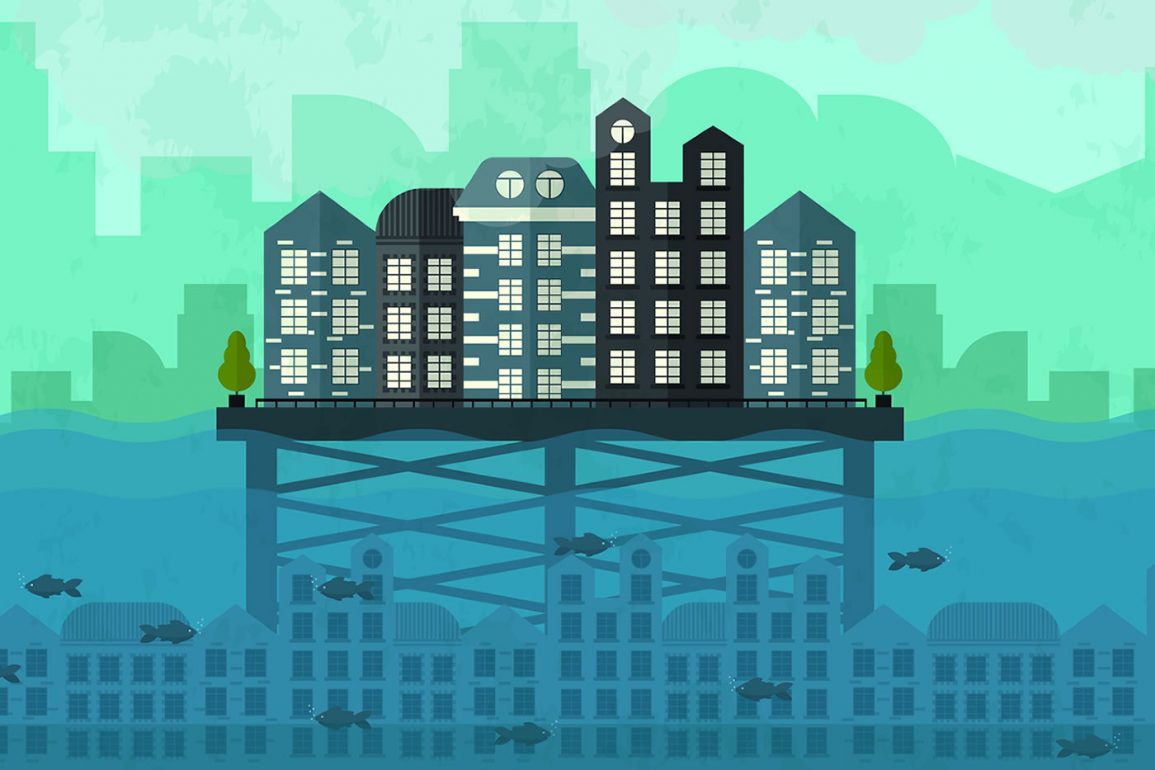 Will the Property Industry Change Before the Sea Level Does?

Two thousand and seventeen was the worst hurricane season ever recorded. Over $282 billion in damages and over 3,000 deaths were reported. This year’s hurricane season has seen Hurricane Florence cause major damage on the Southern Atlantic coastline and more people than ever are probably thinking about the risk their properties face due to flooding.

But it isn’t just the bad run of storms that is causing all of the harm. One of the main reasons that these tropical weather anomalies are causing more damage than ever before is due to the rising sea level created by the change in the earth’s climate. In June we reported about a new study from the Union of Concerned Scientists which estimated that around $1.07 trillion worth of property was at risk from its exposure to the encroaching coastline. Since then areas from all over the country from Philadelphia to South Carolina have reported a drop in value for properties subject to repeat flooding.

This is on the radar of the property industry. A recent survey by Altus Group, a global property software, data solutions and independent advisory service company, showed that property professionals view climate change as one of the leading concerns in the near future, above geopolitical risks. To understand more about this somewhat surprising sentiment I got in touch with Richard Kalvoda, Senior Executive Vice President of Advisory at Altus Group.

“At first glance it might be surprising that natural disasters are at the top of many investors’ minds, but if you think about other risks like terrorism or political fallout, natural disaster risk is actually a little bit more manageable. You can’t control the natural disasters, but they are location-specific so the risk can be mitigated with insurance and underwriting,” Kalvoda said. “For those reasons it makes sense for investors to focus more on natural disasters. There have also been more frequent and larger events so it is becoming hard to ignore.”

Even so, Kalvoda doesn’t see an immediate change in the way the real estate industry values coastal properties. “I don’t see any immediate impact except for the slight increase in insurance costs,” he said. “Insurance is not one of the major expenses in a property so it isn’t a significant pressure in this respect.”

While there may be no major immediate impact on value, good investors are the ones who are looking a little further down the road. This means that some of the more forward thinking property owners will start to factor in future costs for flood insurance and repair, even if they are a bit speculative. “What I think might affect certain areas more is that there will be high due diligence and underwriting for many of these buildings to understand what will be the future insurance costs and possible lack of future demand for a building,” explained Kalvoda. He pointed out that there is a growing sentiment toward openness in financial disclosures when it comes to climate issues, spearheaded by the newly formed Task Force on Climate-related Financial Disclosures and its main financial backer Michael Bloomberg.

It is a simple thing to say that a property investor should add sea level rise into their due diligence research, but in practice it can be quite complicated. To better understand how to assess the risks of flood damage to individual parcels I spoke with John Macomber, a Harvard Business School professor with a long career in the property industry. His area of focus is understanding investments in the “resilience” of our built environment with respect to perils like sea level rise. He has spent a lot of time poring over the research about the rising tides.

“I think a lot about probabilities. First, look at range estimates like the Unified Sea Level Rise Projection of the Southeast Florida Regional Compact.  Seas might go up two meters in the next hundred years or they might only go up half a meter,” said Macomber. “We don’t know for sure how high or how fast. Second, the insurance industry also looks carefully at probabilities and exposures. The main probability tool is an exceedance curve. It considers likelihood of a loss event and, if the event occurs, the range of economic impacts. This curve contemplates high probabilities for a low damage event, and a low probability of a high damage event.”

By combining these curves, investors can design a sound game plan for how to deal with their coastal properties: What is the probability today of a flood event, how much will the event cost me if it happens, and do these probabilities change if seas get higher? Obviously, property owners can impact the odds by making structures stronger, by designing recovery to be less expensive, or in thoughtful assessment of where to build.  “I don’t want to turn people off by being an alarmist. The sea is not coming up two meters tomorrow,” said Macomber. “Rather, I think that all portfolio managers should say, ‘let’s look at these sea rise probability ranges and the exceedance models, asset by asset. Maybe it is worth the money to move the generators to the second floor and buy AquaFence just in case — but I don’t think I’m going to sell the property.’”

Professor Macomber sees three reasons that the insurance industry hasn’t put more price pressure on risky coastal properties. First, commercial insurers have a short time frame of exposure – just a year or two. Second, the big risks usually get transferred to other entities. Third, when the market won’t sell private insurance, today the federal government steps in. He explained that, “Most of the insurers we are aware of from TV advertising are retail sales organizations like State Farm. They want to have a relationship with you or me for the promotion of multiple insurance and financial products. They transfer the bigger risk to reinsurers like Swiss Re, so those entities have to be a lot more analytical about large scale risks. But even the reinsurers usually only have two or three year contract, so they don’t have a near term existential threat from sea rise either.” In many locations, the private market does not underwrite flood insurance at all — insurance brokers rely on the National Flood Insurance Program, a heavily government subsidized backstop run by FEMA and funded year to year by Congress.

Plus, most of these property owners who might go without insurance or expect that that following a catastrophic weather event FEMA, the federal agency that doles out money for disaster relief, will likely come to the rescue. Until, of course, they don’t. If the US gets into a budget crunch and a heavy storm season simultaneously, we might see the entire disaster safety net unravel. In an attempt to be more proactive FEMA has started a Coastal Hazard Analysis Modeling Program that can be another resource for owners trying to understand the risk profile of their properties. Observers expect that at some point FEMA will not get the funding from Congress to continue to pay to rebuilt areas that will only be inundated by water again in the near future.

“I don’t think that the infrastructure finance industry exists yet but I think that it will. There is already an energy efficiency finance industry, and those energy savings are relatively small compared to what you can save by protecting your building from being washed out to sea.”

Eventually we might start to see third party financing become an attractive product in helping fund more resilient construction in our coastal communities. If lenders start to require additional insurance for properties at risk of flooding, much like many mortgage companies do for wind insurance on properties in Florida, then a lot of capital will be needed to bring many buildings up to par, resilience wise. This could create an entirely new financing industry, one that as Professor Macomber points out, has some parallels in other sectors of the property industry, “I don’t think that the infrastructure finance industry exists yet but I think that it will. There is already an energy efficiency finance industry, and those energy savings are relatively small compared to what you can save by protecting your building from being washed out to sea.” But, Macomber cautions, energy efficiency investments are easier to understand than resilience finance – it’s a quick payback and easy math.

So, for the time being we are relying on insurers, reinsurers and the federal government to save our buildings from impending disaster. Even if in many markets the additional cost of rising insurance is negligible compared to the value of the buildings that are covered, the price for a property is a product of demand. Some forward looking investors are starting to see the possibility of a future downturn in that demand, for instance in Miami-Dade as the Wall Street Journal has reported. This might start to bring negative price pressure on properties and that would reorganize where we decide to rebuild after natural disasters like floods and hurricanes. The property industry is a very sophisticated organism but has been know to wait for cataclysmic events before changing its ways. Hopefully we will not need to see a situation where people suffer huge losses due to the inability to recover from economic damage due to rising waters, before we rethink how to deal with the inevitable rising sea levels.