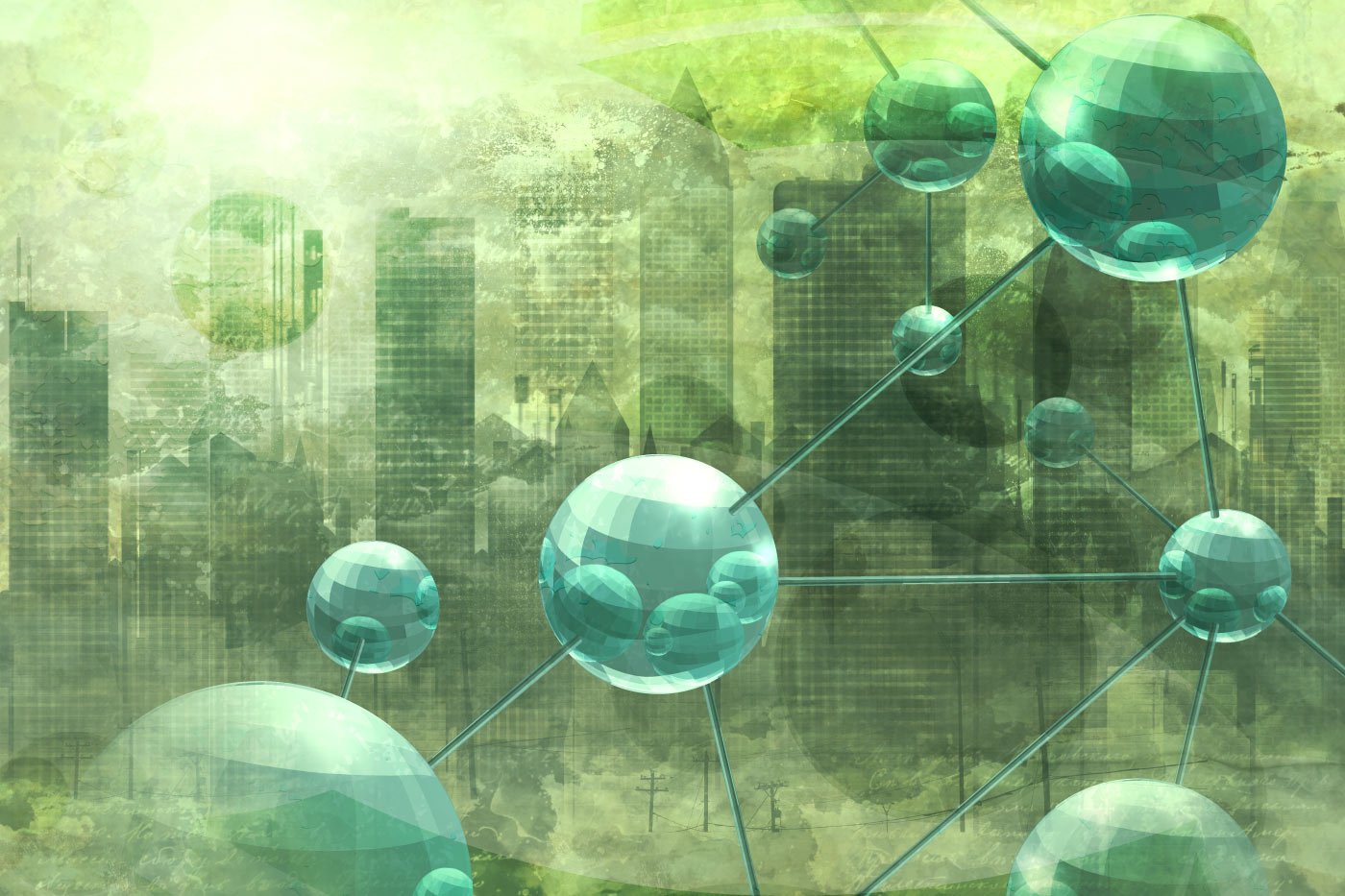 Hydrogen is the universe’s most abundant element. Stars consist primarily of hydrogen, our sun is basically a giant ball composed of hydrogen and helium gas. Down here on Earth, hydrogen bonds with carbon to form different compounds (hydrocarbons) to create natural gas, coal, and petroleum. But hydrogen can also be burned as a supplement to hydrocarbons to power things like boilers or internal combustion engines.

Since there is no carbon created when hydrogen is burnt it has massive implications for our energy landscape. The problem is how it is created. Hydrogen comes in various “color” labels depending on how it’s produced. It ranges from gray (coal) to blue (methane) to pink (nuclear) to green (renewable energy). Since gray and blue hydrogen are made with fossil fuels, efforts are underway to scale down their production and switch to the green type, which has the most transformative potential in helping fight climate change.

Renewables like wind and solar create green hydrogen in a process known as electrolysis. Renewables power electrolyzers that take water and separate the hydrogen from the oxygen. Green hydrogen emits essentially zero greenhouse gasses when used as an energy source, and it has the potential to power ships and cars, make steel production cleaner, and help decarbonize other industries that are hard to electrify.

Some energy experts are quick to temper the enthusiasm and give some reality checks. Hydrogen can be used to decarbonize almost every industry, but that doesn’t mean it should or will be, according to a recent report from the Rocky Mountain Institute, a sustainability research organization. The RMI says hydrogen should be prioritized for use in industries where energy efficiency and direct electrification are challenging, such as steelmaking and heavy shipping. In industries like real estate, the use of green hydrogen for areas like heating will be limited, for now, at least. “The electrification of building systems is more attractive than green hydrogen in most cases,” said Mike Henchen, Principal of Carbon-Free Buildings at RMI. “Hydrogen can be an amazing fuel and energy source for the right uses, but not for all uses.”

Not viable for building heat?

In buildings, using green hydrogen for heating is more complicated and unlikely to happen at scale. There are a few reasons for this. First, many boilers and hot water heaters aren’t designed to burn hydrogen. All that equipment would need to be upgraded or replaced, along with the pipelines that deliver it, which isn’t economically practical.

Also, right now, green hydrogen is more expensive than most fossil fuels like natural gas. Even at ambitious estimates, green hydrogen is pricier, so it may be worth it for some uses but probably not for heating bills. Using hydrogen would increase home heating bills in the U.K. by 70 percent compared to using natural gas, according to research recently commissioned by renewable energy charity MCS Foundation. Hydrogen also isn’t immune to the inflationary pressures experienced by other energy resources. The cost of hydrogen produced from U.S. electrolyzers nearly tripled over the summer from recent price norms.

Blending natural gas with hydrogen is one option being considered for building heat. Doing so doesn’t require pipelines or boiler infrastructure upgrades, as it would be different from a pure hydrogen system. This could work, but the emissions reductions from blending hydrogen with gas are limited. The RMI estimates that blending as much hydrogen as most pipelines can handle before they degrade would only translate to a 7 percent carbon emissions reduction, so they suggest it may not be worth the effort.

This doesn’t mean that hydrogen for building heat can’t work or isn’t being tried in some cases. The use of hydrogen to heat buildings is being pushed more in Europe and Asia than in the U.S. In the U.K., a small village near Newcastle was used as a test case during a 10-month period last year, where up to 20 percent hydrogen was blended into the natural gas network to heat 650 residential homes. The U.K. government has set a goal to heat homes in a small number of additional villages with 100 percent hydrogen by this year, and they want to scale up to have a “hydrogen town” by 2030.

Efforts are also underway in Japan. Toyota recently broke ground on a 175-acre “prototype city of the future” called Woven City, built at the site of a former vehicle manufacturing facility. The city is supposed to house about 2,000 people, mostly Toyota employees and their families. Along with hydrogen-powered vehicles, Woven City plans to have a hydrogen infrastructure that will partially power heating in residential buildings. If Toyota’s hydrogen city works out, it could use similar technology in its other Asian real estate developments.

Despite the hype of some of these new use cases, Henchen of RMI is skeptical about hydrogen’s use as a building fuel for heat. “I expect we’ll see clusters of neighborhoods and building projects that’ll use green hydrogen, but it’s not practical at scale and for an entire city,” he said. There could be limited uses of hydrogen for heating buildings in rural areas without natural gas service and where it gets freezing. And there could also be some one-off projects for single buildings that use green hydrogen supplied via a truck, like with propane. But for the most part, heating buildings is better suited for electrification than for hydrogen. Heat pumps are lower-cost, more efficient solutions for building decarbonization than hydrogen, especially in warm and temperate climates, though even heat pumps have some limitations in commercial building use.

Hydrogen could help significantly improve the sustainability of the steelmaking process, which is responsible for nearly eight percent of global carbon emissions today. The need for “green” steel is crucial for the real estate sector and the fight against climate change. If the global steel industry were a country, its greenhouse gas emissions would rank third, below the U.S. but greater than India. No other industrial material in the world has a more significant climate impact than steel, which is, obviously, a vital material in the real estate industry.

Twenty-eight percent of all global carbon emissions come from building operations in the real estate sector, but 11 percent comes from materials and construction. Materials and construction are the embodied carbon of a building’s overall carbon footprint and are becoming increasingly significant. More effort has been made in real estate to tackle building operations emissions, so embodied carbon is becoming a larger share of most structures’ GHG footprint. And that brings us back to steel production, a building material with an outsized carbon footprint that can add significantly to a building portfolio’s embodied carbon.

Manufacturing steel from iron ore is very energy intensive and dependent on fossil fuels. Steelmakers are experimenting with ways to replace coal and coke with hydrogen, resulting in “greener” steel and lower carbon footprints for real estate. While many of the world’s biggest steelmakers are investing in green steel production, such as ArcelorMittal and ThyssenKrupp, the process comes with several challenges. New steel making technologies that use hydrogen show promise, but the costs of setting up new plants and closing old ones are still a significant hurdle to change in the steel industry.

An industry-wide shift to green steelmaking would also require an enormous amount of renewable solar and wind energy. For example, if hydrogen-based steel production replaced all of Europe’s current steel production, the industry’s electricity demand would spike at least fivefold annually, according to researchers at K1-Met in Austria. That type of demand would require an additional 50,000 wind turbines and is equal to roughly 18 percent of total European Union electricity consumption. Hydrogen-based steel production on such a large scale would also need massive amounts of electrolyzer capacity, far more than the world’s current largest electrolyzers currently operate at.

The challenges for decarbonizing steelmaking at scale are enormous, but progress is being made, and green hydrogen is a big part of it. Many major European steel manufacturers have piloted large facilities for this purpose, with Germany leading the way with at least seven projects in the works. Along with recycling steel from demolished buildings, the decarbonization of steelmaking can help the real estate industry lower its embodied carbon footprint. This is perhaps the biggest role green hydrogen will play in the years ahead in commercial real estate.

Green hydrogen may sometimes work as fuel to heat buildings, but electrification via heat pumps is likely the better bet. Hydrogen is the most abundant element in the universe, and the green kind is generating a lot of buzz in the energy field. Hydrogen will be a boon for real estate decarbonization in some areas, but even the energy experts say we should temper enthusiasm and focus on where it makes the most sense.