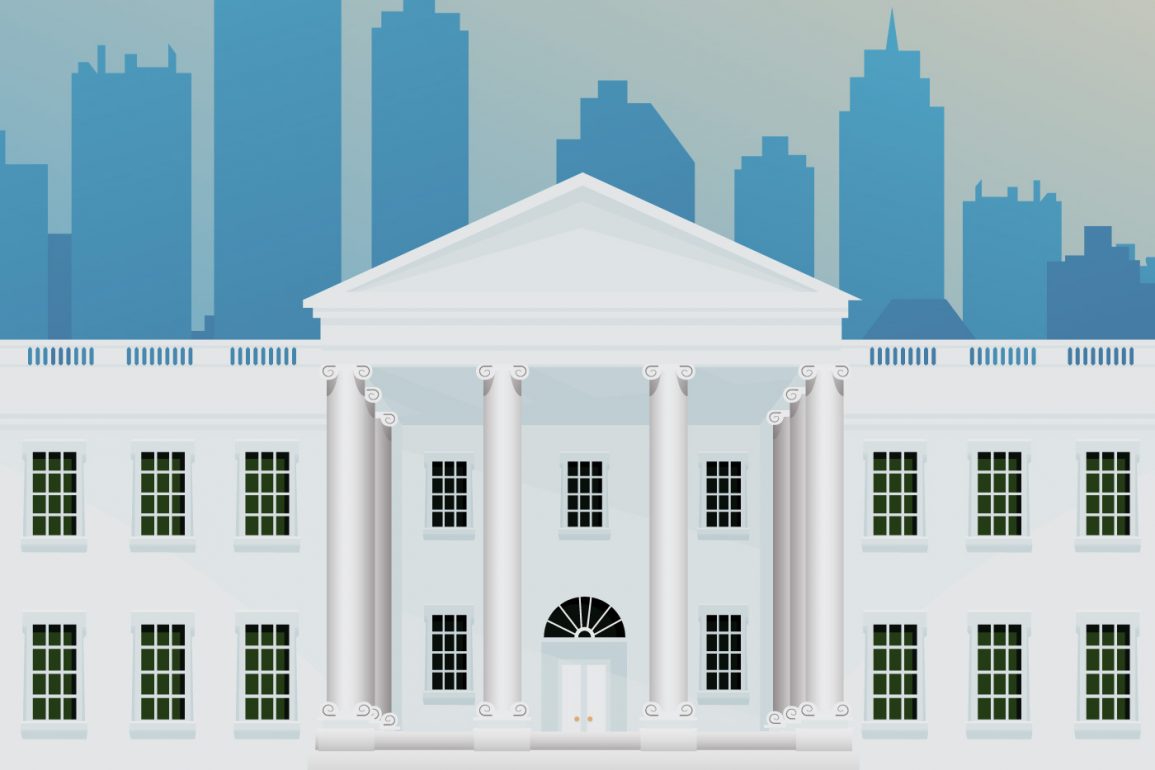 This is the second in a series (first article here ↗) about how Biden’s policies will differ from those of the current administration. In my first article, I examined the potential impact of Biden’s expected tax proposals. In this article, I explore the expected spending priorities and regulatory approach, as well as the broader economic climate.

Buried under the shocking scenes of rioting at the capitol is the fact that the Democratic Party will control both houses of Congress for at least the next two years. The party’s sweep in the Georgia runoff elections dramatically raises the odds that the Biden Administration will be able to implement much of his campaign platform. However, the razor-thin edge in both houses will likely temper the scale and ambition of his initiatives.

Clouds in the short-term forecast

“What’s good for General Motors is good for the country, and visa versa.” Though that (in)famous quote by GM’s former president is often misleadingly taken out of context, we could say the same for the commercial real estate sector. Commercial real estate prospers when the country’s economy is robust, and economic growth certainly benefits from strong property markets.

Indeed, no factor will be more critical for real estate’s overall vitality than the speed and strength of the economy’s recovery from the pandemic recession, and then the longer-term economy’s growth prospects. The economy was clearly weakening in the latter months of 2020 as the number of COVID-19 again surged to new record levels, providing Congress with the impetus to finally enact a second pandemic relief package.

The $900 billion in stimulus will help the economy get through the next few months, but more aid likely will be needed once some of the key provisions of this latest bill expire at the end of March. However, with Democrats soon to control the Senate, another, and larger, pandemic-relief bill seems almost certain to be enacted early in the Biden Administration. Major elements of Biden’s “Emergency Action Plan” could include raising the $600 stimulus checks by $1,400 for a total of $2,000 per family member; extending unemployment benefits beyond March; and providing fiscal relief to broke state and local governments. These should keep propping up the economy a while longer.

Nonetheless, real healing cannot begin until vaccine distribution reaches a critical mass so that consumers and businesses believe it’s safe to resume regular economic activities. Until then, property markets will suffer along with the larger economy. Not all sectors, however. The industrial sector is thriving with the surge in e-commerce. Online shopping will recede as the economy reopens, but other drivers should keep warehouse demand growing for years to come. But other major CRE sectors will all endure dampened property demand to varying degrees, at least until growth resumes a healthier pace.

Of more direct consequence for residential landlords, the second coronavirus relief bill also extended the eviction moratorium for many needy tenants to the end of January, and allocated $25 billion in grants to state and local governments for housing-related assistance to low-income households for up to 12 months. Biden’s emergency stimulus bill could extend the eviction moratorium further, following the lead of New York, Oregon, and other states.

Another possible direct benefit to the retail sector: help for the beleaguered restaurant industry. The revised Health and Economic Recovery Omnibus Emergency Solutions (HEROS) Act passed by the House in September included $120 billion in targeted relief for restaurants. Though not explicitly endorsed by Biden, a similar provision could be included in any future stimulus package. Loading…

Sunnier skies in the longer-term

Looking past the pandemic, growth prospects for later this year and beyond will depend partly on Biden’s economic policies as well as the degree of damage the economy sustained during the pandemic. There is every reason to expect a surge of pent-up demand once the economy fully reopens, though recent delays in the vaccine rollout suggest widespread distribution may not occur before the summer.

For now, the primary headwind to economic growth and property demand is not consumer spending, which has held up remarkably well overall during the recession thanks to government largesse and buoyant equity markets. Rather, the constraints are on the supply side of the economy. Countless small businesses have close temporarily due to the pandemic, but many have now shuttered permanently, destroying millions of jobs in the process.

More than any other single factor, it is job growth that fuels property demand: for apartments and houses to shelter the workers; for the offices and warehouses where they work; and for the stores where they’ll shop. Economic growth and property demand in the coming quarters will depend greatly on how many of these firms can survive, how quickly the failed businesses can be replaced, and thus how quickly jobless workers can be rehired.

Beyond the tax policies analyzed in my previous article, Biden has proposed various initiatives that would influence economic growth or have more direct impacts on commercial property markets.

Increased Federal spending: Biden proposes to significantly increase government spending in several key areas, including infrastructure, health care, and education. Independent assessments estimate the total bill would amount to over $7 trillion, much of it front-loaded to jump-start the recovery. Biden won’t get everything he wants, but the Democratic Congress will support much of his agenda.

Business regulation: Biden will try to reverse much of Trump’s business-friendly deregulatory agenda. The incoming Administration will likely immediately terminate any Trump initiatives still in the approval pipeline and work to overturn many that have already been enacted, mainly related to the environment, public health, and banking. The energy and financial sectors are likely to see less favorable regulatory treatment.

Immigration: Biden promises to roll back Trump’s immigration restrictions where he can and ask Congress to expand legal immigration. In particular, we can expect Biden to push to make the Deferred Action for Childhood Arrivals (DACA) program permanent and increase the number of refugees and asylum seekers allowed to enter the country. Expanding immigration would raise aggregate demand and GDP growth and could grow the pool of workers in sectors that suffered from shortages prior to the pandemic, such as construction and nursing.

Trade: Trade is one policy area when Biden shows more kinship with Trump. Though not as protectionist, Biden is not a strong free-trader and, like Trump, wants tougher trade practices with China. Biden also seeks to “re-shore” American jobs through his “Made in America” program to increase government purchases of American-made products. But overall, trade tensions should ease should under the Biden Administration.

Economic development: The Opportunity Zone program was enacted as part of the 2017 Tax Cut and Jobs Act (TCJA) and is Trump’s signature initiative for driving private investment into economically distressed communities. The program has been popular with investors, but critics complain that the program often subsidizes investments that would have occurred anyway. The Biden Administration seeks to retain but reform the program as part of his Build Back Better agenda. Biden also proposes to expand the separate New Markets Tax Credit, providing more opportunities for community development groups to invest in lower-income neighborhoods.

Growth on the forecast

Several leading non-partisan forecasting firms, including Oxford Economics, Moody’s Analytics, and Rabobank have prepared projections comparing growth anticipated under a second Trump Administration versus a new Biden Administration. Each uses different assumptions about what tax and spending proposals are ultimately adopted, but all projections conclude that Biden’s “tax and spend” policies would yield somewhat faster GDP and job growth (and federal debt) than would Trump’s plan that focuses on reducing taxes, spending and regulation.

Forecasts from partisan think-tanks inevitably reach differing conclusions based on their ideological perspectives. But most impartial analysts conclude that if Biden is successful in enacting a substantial share of his policy initiatives, the stimulus effect alone from his increased spending should ensure above-trendline economic and job growth, more than offsetting any potential slowing attributable to expected tax increases and additional regulations. This growth should provide a solid foundation for property demand in the coming years.

Lastly, Biden’s picks for top economic policy jobs can greatly impact how policy initiatives are interpreted and implemented. Most notable is former Fed Chair Janet Yellen for Treasury Secretary. She and Cecilia Rouse, whom Biden will nominate to head the Council of Economic Advisors, are both liberal labor economists, ensuring that the Biden Administration’s economic focus will shift sharply from Trump’s pro-business, Wall Street orientation.

Biden also intends to nominate several other economists whose careers have focused on climate change or equity issues including Neera Tanden to head the Office of Management and Budget; Brian Deese to serve as National Economic Council director; and Heather Marie Boushey and Jared Bernstein to serve with Rouse on the CEA. In a sharp departure from the Trump Administration, no senior officials are drawn directly from the commercial real estate sector.

Property shelters from the storm

Despite higher taxes and greater regulation, the commercial property sector should prosper as the economy emerges from the pandemic and greater government spending promotes economic growth. The impacts of Biden’s economic policies on each property type will vary.

The industrialsectorhas been the clear property outperformer in recent years and gained more during the pandemic, particularly at the expense of retailing. Industrial stands to benefit from Biden’s potential plans to increase spending on housing, building sustainability, and other forms of infrastructure. Rising trade flows would also support warehouse demand generally, though Biden’s desire to encourage domestic manufacturing could alter the hot locations.

The impact of Biden’s policies on the housing and multifamilymarkets should also be positive. Biden’s sustainability plan includes financial incentives to weatherize houses and apartment buildings. The Administration’s tilt from Wall Street to Main Street and greater focus on equitable growth should provide more affordable housing opportunities. Population growth might tick up if immigration expands, bolstering housing demand.

The office and retail sectors both face tough transitions coming out of the pandemic. Demand for offices is sure not to revert to its pre-pandemic levels as more employees work from home more often, but the sector should benefit overall from faster economic growth. Similarly, demand for retail space will not return to prior levels for many years. However, retailers and shopping centers that cater to less affluent consumers should benefit from tax policies that protect the tax-home pay of lower-income households while raising taxes on wealthier families. Finally, investor demand for property could take a hit from Biden’s plans to raise taxes on business revenue and wealthier households through higher tax rates and the reduction or elimination of some tax write-offs. 1031 exchanges could be eliminated or sharply reduced. However, Biden is likely to focus on growing the economy before initiating a tax overhaul, so property investors would benefit from improving market conditions before the tax man comes knocking.