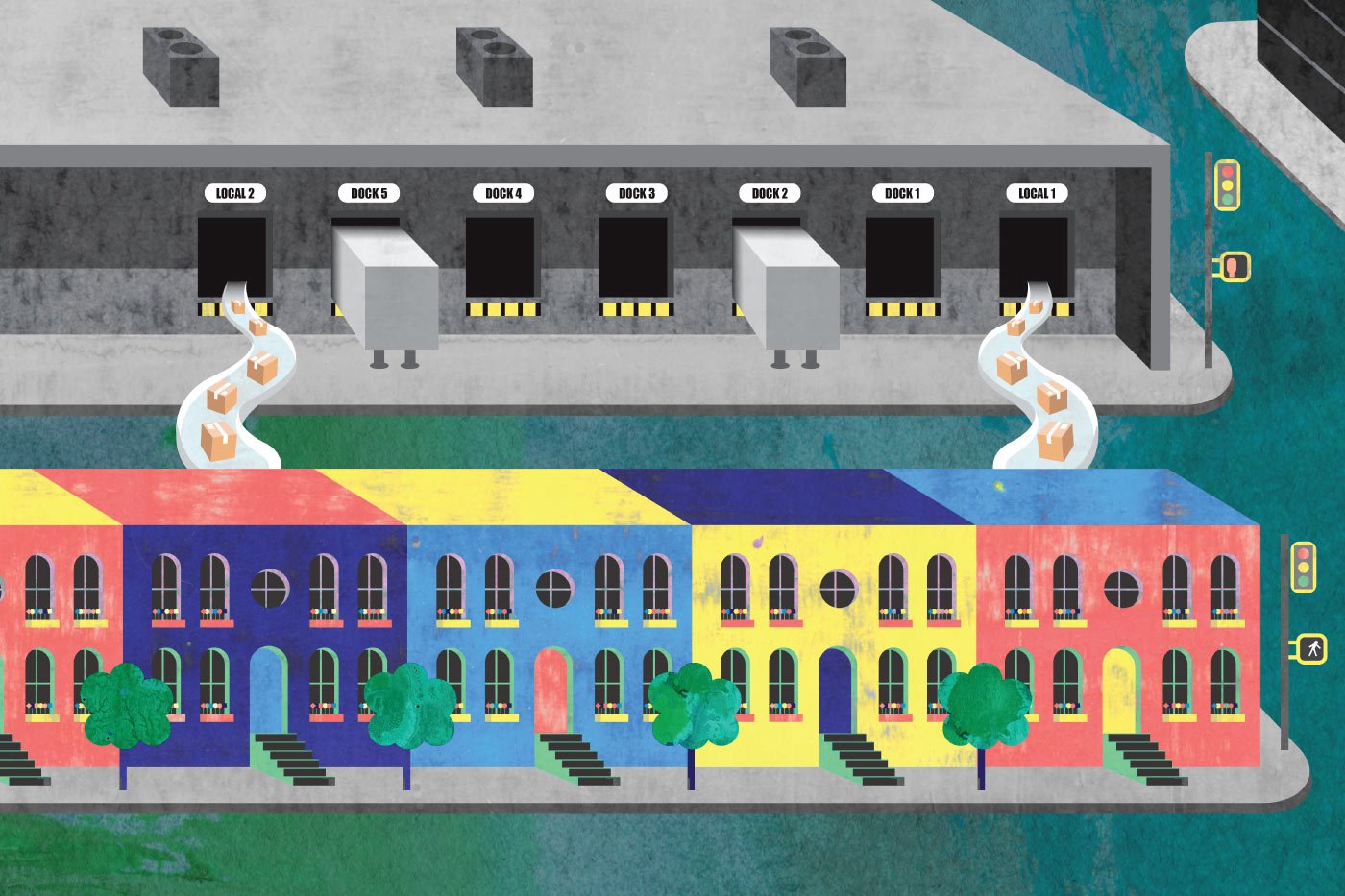 Warehouse in the Middle of Our Street: The Future of Urban Logistics Real Estate

As civilization dawned and humans exchanged their spears for picks, an interesting problem arose: what do we do with the harvest of our newfound agricultural habit? The answer to that question was shockingly similar to what we know today as a warehouse. Even the earliest archaeological sites contained some sort of storage for the staples of life. They were almost always included in the most prized real estate, that which was located within the protective city walls.

The Romans, as they were wont to do, brought their engineering might to scale the idea of storage and distribution centers. By the time early Rome was built, it included a large area near the Tiber River dedicated to warehousing goods. These served an important function of both a storage and distribution hub for the city. There was so much dedicated warehouse space that it was said that when the emperor Septimius Severus died in 211 AD the city’s Horrea was stocked with enough food to supply Rome’s million-strong population for seven years.

The most impressive of these buildings was the Horrea Galbae. With 140 rooms and over 225,000 feet of storage space, it was impressive even by today’s standards. The two-story brick building had large loading doors and ramps rather than stairs so heavy items could be easily transported. It also had offices and stores attached so the people in charge of this important operation could do their work and vendors could display their goods. This remained the basic function and design for warehouses for nearly the next two millennia.

The industrial revolution changed all of this, of course. As advanced cities focused more on industry than agriculture, warehouses were needed less for storage and more for logistics. Mass produce goods need to get to the masses waiting for them on distant shores. Warehouses started becoming staging areas for the shipment of newly-produced goods and were increasingly built in industrial areas and close to shipping depots like ports and railways. Since then there have been a few other innovations that have changed the shape of the warehouse, like the forklift that allowed vertical racking and the shipping container which standardized sizes for loading bays. But the identity of a warehouse, large often unsightly buildings built in industrial areas with little consideration for those working in it, has remained. Until now.

We are standing at the turning point of a tidal shift in the way we purchase goods.

More and more the world is deciding to look online for purchases rather than shop at stores. By some estimates almost a quarter of the world’s purchases will be made online by 2023, an amazing growth rate if you compare it to the less than 5 percent that it represented in 2010. In order for this to happen we will need to see a complete rethinking of our global logistics and warehousing system. It is this change that we decided to quantify in our latest research report, Retail & Robots: New Trends and Technologies are Upending Warehouse Real Estate.

After talking to dozens of commercial property operators and entrepreneurs innovating in the space one thing was clear, the sleepy warehouse sector was in for quite a change. The first big shift, it seems, is in desirable locations. While warehouses have traditionally been located near ports or factories, where space is abundant and long haul shipping is close by, the increasing need for last mile logistics has sparked a search for properties near dense urban areas. This is being spearheaded by the e-commerce giant Amazon. As the retailer looks to create a logistics network that can supply a large portion of the world’s population with next day delivery they have to bring their products closer to their customers. This means putting large warehouses on the outskirts of cities, with easy access to major highways, that are prestocked with the most ordered items. Then what are called “last touch” inner city warehouses can sort bulk goods and dispatch smaller transport directly to people’s doorsteps. For on-time delivery to happen everything has to be measured to the second. Even traffic patterns are analyzed in order to give the company a better understanding of how a warehouse’s delivery radius changes depending on time of day.

Bringing warehouses out of the outskirts and into cities poses many new challenges for the industry. The first being finding usable space. Most buildings in dense areas don’t have the kind of footprint needed for logistics so some real estate teams are creating vertical warehouses by adding stories onto existing industrial buildings. There are several new multistory warehouses recently completed or under construction in the United States. In New York City, for example, a multistory facility called Bronx 1 is owned and operated by logistics firm Prologis. The property is less than 3.5 miles from the 145th Street Bridge and 15 miles from JFK International Airport. In Brooklyn, Bridge Development Partners and DH Property Holdings are building a four-story, 1.3M square-foot distribution center. When complete, the speculative project will be the largest multistory warehouse in the United States. Other urban areas are being targeted for new multistory warehouse facilities too. Prologis recently opened one minutes from downtown Seattle, near the Port of Seattle and close to multiple rail nodes. And later this year, Amazon will open a 700k square-foot, 4 level fulfillment center on the outskirts of Atlanta.

As we all know being in a city means having human neighbors, something that, thanks to designated zoning, wasn’t a problem for most industrial sites historically. Now warehouses are finding themselves having to create stylish buildings and even create community perks like parks in order to appease local land-use regulators and their constituents.

Interestingly, one of the technologies that is hyped as the future of delivery, drones, didn’t seem to be a consideration for all but the most precious of cargo. We learned that even small logistic centers can route hundreds of thousands of parcels every day so a drone delivery fleet would literally darken the sky over cities if it even tried to handle a miniscule percentage of our e-commerce needs. While there might be some use cases in time-sensitive deliveries like medicine or to remote locations drones will likely not be a significant piece of our logistics infrastructure so don’t expect to see warehouses act as unmanned aircraft airports any time soon.

A technology that absolutely is changing the needs of the modern warehouse is robotics.

For Amazon or any other company to send goods in the time required by an increasingly impatient consumer they need to get it off the shelf and packed perfectly into a truck fast. This requires an incredibly complicated orchestra of software and hardware, one that needs high-skilled labor to maintain. One of the counterintuitive facts that we learned was that modern warehouses require more labor, not less. This labor is also highly skilled so warehouses can no longer be dark, uncomfortable places to work. As the office real estate industry has learned long ago, a good workplace is a powerful weapon in the war for talent. Racking robots are also able to active space much taller than the pallet and forklift system could. This has risen the desired “clear height” of warehouses from 24 feet to 40. This might render shorter warehouses functionally obsolete in the near future.

All of these needed improvements have challenged the industry standard of renting warehouse space on “triple net” terms. This means that the tenant is responsible for the taxes, insurance and, most importantly, the improvements. That meant that warehouse owners generally had little more to think about than the building’s envelope and landscaping. Now, we are starting to see some of the more forward-thinking owners starting to invest in the building’s internal infrastructure. This includes energy-saving programs that can often be financed by a share of the future energy savings. As companies increasingly look to be more sustainable most people we talked to expect these kinds of partnerships to be a large part of the future of the warehousing industry.

So, it seems that we are coming full circle. As home delivery becomes a bigger part of our economy, warehouses are moving from the industrial outskirts and becoming a part of our neighborhoods. Much like the original logistic centers—the Horrea of ancient Rome—they are increasingly becoming places for skilled work and value-add activities like packaging and sorting. Many might be given pause by the prospect of industrial buildings as part of a city landscape but that is likely because they are still stuck in the paradigm created in the last few hundred years that depicts warehouses as ugly, unsophisticated buildings. One of the inevitabilities is that as warehouses creep closer to our own homes and workplaces they will eventually change to suit our needs, not the other way around.