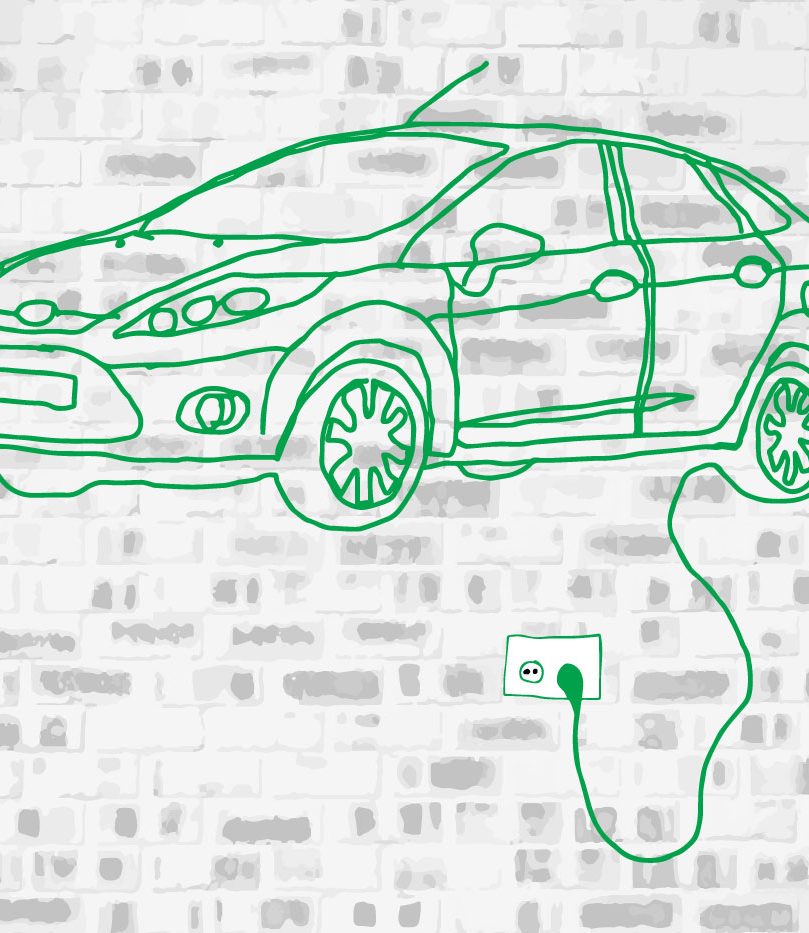 The promise that electric vehicles (EVs) would soon dominate the auto industry has been a dream of auto industry innovators since 1914 when Henry Ford announced that he and Thomas Edison had been tinkering away at a car powered by electrical power. Ford promised that the vehicle would be “cheap and practicable” for the mass market, but after a slew of technical difficulties and some high-profile bickering, the project was ultimately scrapped.

Interest in pushing cars that run purely on electric power into the mainstream would spark periodically over the years before fizzling out for a number of reasons, one of which being the sheer impracticality of owning one with the lack of charging infrastructure. But recent announcements from both the Biden administration and prominent automakers could create the charging framework necessary for EVs to really thrive. These same investments are also paving a new opportunity for real estate owners interested in installing EV charging stations on their properties to enhance their investment.

All-electric vehicle sales have been gaining momentum in the U.S. within the past decade, but they surged in 2022, despite computer chip shortages and a hobbled supply chain. Five point eight percent of all vehicles sold last year were fully electric, almost double the amount from the previous year, and steep investments from the federal government are set to spur further adoption. The Biden administration wants EVs to account for 50 percent of cars sold in the U.S. by the end of this decade, and the recent passage of the Bipartisan Infrastructure Law doles out $7.5 billion to build out a national network of 500,000 EV charging stations. Not to mention, the USPS just made a historic announcement to deploy 66,000 all-electric delivery vehicles and the installation of EV charging stations in post offices across the country.

While fully electric vehicles have yet to dominate the auto market, their rising popularity and have given commercial property owners more confidence to invest in adding EV charging stations to their properties. In the multifamily sector, there’s a growing industry perspective that installing chargers will boost the asset value of a building since EV owners tend to be wealthier and are thus more desirable to have as renters. But setting up charging stations for electric cars is an endeavor riddled with complications thanks to local regulations and zoning codes, equipment type, and high costs of preparing the area for installation, the installation itself, and regular maintenance. The high upfront costs that owners can incur, even with the latest slew of tax incentives that have recently been passed into law.

Still, commercial property owners have a lot to gain by taking the EV charging plunge if they can, now that there’s been a hefty investment to add necessary charging infrastructure. The Biden administration’s ambitions have made the investment in EV charging stations less of an uncertain one, but new technology is potentially making a better business case for property owners to do so as well. Vehicle-to-grid (V2G) technology, sometimes known as bidirectional charging, refers to the use of EVs as a source of stored energy that can be fed back into the electrical grid. These vehicle-to-grid systems allow EVs to charge and discharge electricity to and from the grid, depending on the needs of the grid and the availability of excess energy in the EV’s battery.

Because V2G systems allow EVs to act as a distributed energy storage system, it gives property owners the ability to provide services like balancing energy supply and demand throughout the day and providing backup power during outages. Buildings can strategically employ energy from automobile batteries that are shared on their system during peak hours by using modern energy management software.

Additionally, V2G technology could also help increase the overall demand for EV charging infrastructure, which could, in turn, drive up the value of commercial properties that have EV charging stations installed. Property owners can also benefit from installing V2G technology by reducing their energy costs, managing their energy demand, and improving the reliability of their energy supply. But if EVs could send power back to the grid, that would provide a huge value-add of an additional source of revenue for landlords and property owners in the form of grid services.

Vehicle-to-grid technology may be an emerging tech category, but mounting pressure to mitigate climate change is making it an attractive one. In 2017, V2G technology’s global market was assessed to be worth $2.78 billion, but a recent market report shows that significant growth is expected in tandem with widespread EV adoption. By 2031, the V2G market is anticipated to grow at a yearly rate of 16.45 percent to $12.75 billion, and a recent announcement from a major automaker is making that prediction seem just as tangible as it is optimistic.

Last December, Toyota announced a partnership with Oncor Electric Delivery (Oncor), a Texas-based electric transmission and distribution firm, for a major pilot project centered around V2G technology. Toyota’s Electric Vehicle Charging Solutions (EVCS) team will be in charge of the project, which will be a significant first for Toyota in the United States in terms of working with a public utility on EVs.

The two businesses have first agreed to work together on a two-phase study initiative using Oncor’s research and testing microgrid at its System Operating Services Facility in south Dallas, which is close to Toyota’s neighboring national headquarters. The microgrid is made up of four interconnected microgrids that can run separately, concurrently, in tandem, or as a single, bigger system. A V2G charger, solar panels, and battery storage are all included in the microgrid’s subsystems for testing and assessment.

After this first phase, the project will move into a second phase that is scheduled to begin in 2023. This second phase will include a V2G pilot where testing will be done with EVs connected at homes or businesses within Oncor’s service area in accordance with all customary interconnection procedures and agreements.

How to Build a Workplace Tech Strategy That Lasts

The partnership will help Oncor and Toyota gain insight into the present and upcoming needs of its customers. Additionally, it will give Oncor more knowledge about the infrastructure required to support the rapid expansion of electric vehicles and electric vehicle charging infrastructure, accommodate their needs, and support electric vehicles. It will also help Oncor better comprehend how V2G will affect the electric grid. But more importantly, the partnership is prompting investor confidence in V2G technology, which is a big pivot from nearly two years ago.

Back in 2020, billionaire and tech oracle Elon Musk wasn’t the biggest cheerleader for V2G tech as he insisted that it wasn’t economically viable. “Vehicle-to-grid sounds good,” the Tesla CEO had said in a presentation, “but I think it has a much lower utility than people think.” That was because V2G can wear out an EV battery’s lifespan faster because the capability to discharge means that the battery has to charge more often, but there are more drawbacks.

One report shows that V2G yields a loss of energy as well, as efficiencies are typically between 50 and 70 percent. For automakers, V2G functionality necessitates specific hardware in addition to supporting software, primarily in the form of a bi-directional inverter. V2G integration is, therefore, more expensive for manufacturers, which can prevent some models and trim levels from supporting it.

Tesla dominates the EV market, so the fact that the company’s leader downplayed V2G so much made the tech’s potential look more like a pipe dream than a worthwhile venture. Tesla’s vehicles cannot be statically discharged, although the necessary hardware seems to be in place for all of the 2022 models. Enough people had managed to bypass the battery’s software to provide power, that Tesla issued a warning to owners that doing so would void the battery’s warranty. But while it’s likely that Tesla has bidirectional tech in its back pocket, it has an ulterior motive to postpone the tech’s introduction for as long as possible: if Tesla’s vehicles were V2G-capable, then the $10,500 Tesla Powerwall home battery immediately becomes obsolete.

V2G tech is still considered niche, but opportunities for the tech to thrive only grow as more and more EVs are put into play. The dream of having more electric cars on the road than gas guzzlers is finally looking like a plausible reality, and that gives more credence for property owners to deploy their own EV charging stations so that they’ll be better equipped to take advantage of V2G tech when it becomes more widely available.