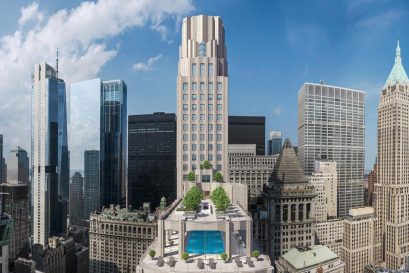 Recently, a group of commercial real estate brokers met in Lake Tahoe, California for the CREi Summit, the first-ever annual meeting of industry social media influencers. At the same time, across the state in Los Angeles, a group of commercial real estate investors came together for the two-day conference of real estate investors called REconvene. This year’s conference season is short and crammed with a number of events postponed due to the pandemic so two competing conferences is not news. What makes both of these conferences noteworthy, however, is that both of them were started by industry professionals thanks to their strong Twitter following.

The CREi Summit is a conference about social media influence so it is rather on brand that the event would be largely promoted through social platforms. The founder of CREi, Ken Ashley, told me that Twitter provides an authentic way for people to live a shared industry experience. “I got on Twitter in 2009 when things were really bad for my business,” he said. “I had four kids at home and one income and so I felt like I would try anything to get traction in a tough business environment. I was open about my experience at the time and, even though it didn’t immediately result in deals like I had hoped, it helped me connect with others in the industry in a really valuable way.”

By and large, Ashley’s experience with what he called RETwit has been positive, “I get to see what others in my industry are thinking in real time. I will never discount the value of personal experience, but sometimes it helps to listen to how others are doing something in order to get better.”

Ashley thinks that the egalitarianism of a public platform spills over into their live events. “At most conferences, there is a pecking order but that wasn’t the case; there were no cliques,” he said. Social media has created an incredible microphone for commercial real estate professionals who take the time to grow it. But it also creates skin in the game and, something he calls an “abundance mentality.”

The REconvene conference brings together what is an even more unlikely group of collaborators, commercial real estate investors. Brokers rely on working with each other but many investors see others in their space as competition. None of that seemed to matter at this conference put together by Moses Kagan, Principle of Adaptive Realty. Kagan’s openness and “building in public” mentality has earned him over 54,000 Twitter followers and quite a bit of gravitas amongst his peers.

When it comes to a business-to-business social media platform, LinkedIn is the obvious choice. But while LinkedIn is a powerful tool for branding and lead generation for many commercial real estate firms, for industry collaboration, Twitter seems to have emerged as a superior platform. “LinkedIn has a lot of people trying to sell you, so you don’t usually want to come off as too spammy,” Ashley said. “Twitter is so massive and there are so many posts getting pushed through it that you feel more free to say what you want, as much as you want.” It’s true that Twitter seems to reward quantity. Almost everyone on Twitter with a large following, at least the ones that didn’t just pay for their followers, post very regularly. There have been studies that show that the “sweet spot” to gain traction on Twitter is between three and seven posts per day.

As for how these online communities can turn into real-life gatherings, the transition might seem unlikely but it has proven to work. “I never envisioned that there would be the desire for people to pull out their wallets and travel the country,” Ashley said. He thinks that the fact that people happily did is a testament to just how important it is, in an industry built upon relationships, to connect with people in real life. Authenticity is the name of the game and it is hard to say you know someone’s authentic self without ever meeting them face-to-face.

Conferences have always been a part of the commercial real estate industry. The size and intimacy of the deals done often require a personal connection that is often solidified over drinks and sealed with handshakes. Before, these conferences were a way to meet new people. They are certainly still that now but in-person events have also taken on another role, one of connecting old internet friends. Twitter might not always be the platform of choice to form these internet friendships but it is becoming clear that, just like shopping, networking in real estate has become an “online first” activity.