In the frenetic news churn of the technology industry, we often focus so accutley on the near future than we forget that we sit on a throne built for us by the innovations of the past. These stories offer a better understanding of the larger timeline of human evolution and give perspective as to how fast the world we create has changed and will continue to change. They can also provide wisdom and inspiration to those who wish to further improve upon the ideas that we have worked to hard to formulate.

Understanding the technological path to now is particularly important for the PropTech industry. Built world technologies are created on top of buildings that are hundreds, if not thousands of years old. The obstacles in our way are often created by the technologies of the past. But the solutions seem inevitable if you know how big and seemingly insurmountable the problems previous innovations were able to fix. We know that this masterpiece of technology will keep on being stacked higher and higher, we just have to remind ourselves at times of what we want it to represent.

One of the leading voices in telling the story of the technologies behind our built environment is Roma Agrawal. She is a physicist by academic study but an engineer by trade. Even at her young age she has been involved in some of the world’s most amazing buildings like The Shard in London, the tallest building in Western Europe. She is also an accomplished author. Her recent book Built: The Hidden Stories Behind Our Structures has been incredibly well received and has made her a celebrity in the structural engineering community and beyond.

Built highlights some of the most important changes in the way we create our structures and is the reason why we invited her to speak at the MIPIM PropTech conference in June. She curated a collection of stories to tell in front of the live audience that highlighted not only the innovations that changed our buildings but the people behind them.

Her first story was about a precocious teenager named Henry.

Henry’s father owned a factory and, curious to understand how it worked, Henry would sneak off and break into it at night. Having caught his son but not having been able to keep him from further traspasses his father gave up and finally trained him to do metalwork.

“At the time the crimean war was happening,” Roma explained. “Henry felt that the guns that the armies were using were not sufficient. So, he designed a bullet that had twice as much firepower as the guns of the time. He showed his innovation to Napoleon’s army and they said ‘we really like this but it is so powerful that if we shoot this out of our guns the barrels will explode.” They suggested that he scale back the explosives. 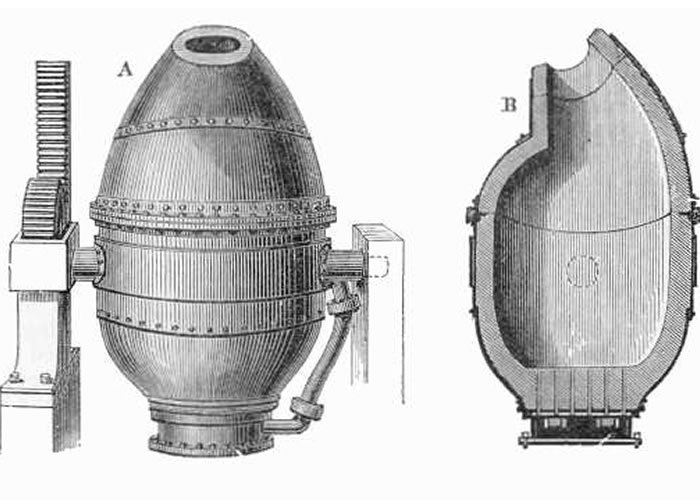 Henry thought that the bullets were not the problem, the guns were. So, rather than impair his innovation he went back to figure out a better way to make these guns.”

Steel as we know today did not exist in the 19th century. At the time the material of choice for big industry was wrought iron. Roma was quick to point out that even the Eiffel Tower — not far from where she was speaking — was made of a form of wrought iron. Engineers of the time knew that adding carbon to steel would make it much stronger but struggled to get the mixture perfect since the iron ore that came from the ground had varying amounts of carbon already mixed in.

As Roma tells it, “One day Henry was getting very irritated by the imperfections at the top of the molten metal and decided to blow hot air onto the mix. The humorous part of this story, although he probably did not think so at the time, was that the first time he tried this it resulted in molten metal being flung all over factory. He had to stand back and wait for the reaction to end but afterwards he found that heating the iron in this way created a reaction that purified it, removing the carbon. He was then able to reintroduce carbon and get the perfect mix for steel.

Henry from this story is Henry Bessemer and his Bessemer process was able produce steel at one sixth the cost.

As Roma points out, this was a revolutionary point in the history of the built environment because it meant that the steel could now become the spines of our buildings, greatly increasing the strength to weight ratio and allowing for the start of the skyscraper era that followed.

Her next story was about Elisha, a New Yorker that would use the newly available steel from the Bessemer process in an inventive new way.

In 1851 Elisha and found himself doing odd jobs around a local factory. One of those jobs was to move goods from place to place. He was not a young man at the time, at about 40 years old. He complained about a bad back and wanted to find a way to do his job in a less labor intensive way. 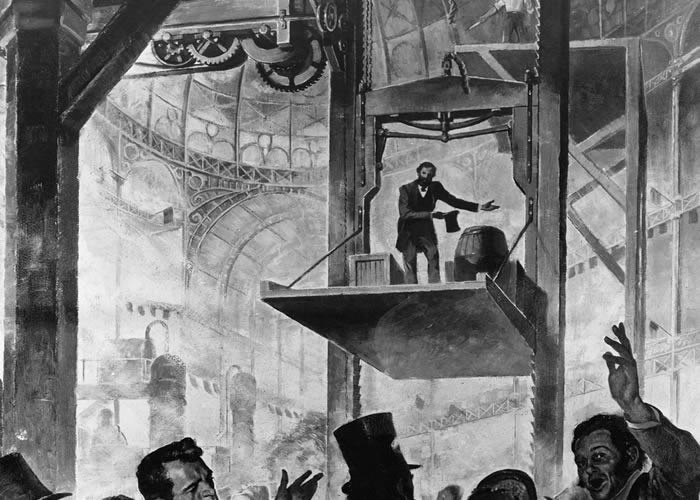 So he went about designing a lift system to help him. Roma gave the backstory for Elisha’s breakthrough, “Lifts have been around for a long time, since Roman times actually, but they were always precarious machines because if the rope or cable holding them snapped it could kill whoever was on it. So Elisha set out to fix this. He chose to use a wagon spring, which is u-shaped when unstressed but would be pulled flat by the weight of the lift. If the rope snaps the spring will snap back and kick metal feet into the ratcheted rails on either side of the lift. This effectively created a safety break.

It turns out that Elisha understood how to market his new product just as well as how to develop it. He decided that the World’s Fair would be the best place to show off his safe lifting device and the best thing to test it on was himself.

Elisha Otis started Otis Elevators, the company that is still the leading lift manufacturer to this day. His invention was paramount for the adoption of tall buildings and changed the value of almost every building over three stories in the world. No longer would the second floor be the most desirable due to the hassle of walking up stairs. Once safe and convenient lifts were installed the top floors, with better views and distance from the chaos of the street below, became more desirable and therefore more expensive. If you are privileged enough to live in a penthouse, you owe a lot to Elisha Otis and his late life inventive streak.

Roma’s last example of the built world’s most innovative people is likely the one she is the most fond of. It is of a woman named Emily Warren Roebling.

Emily was interested from an early age in mechanics and engineering. Obviously there were quite a few barriers to entry for a woman to study this in the mid-eighteenth century. “This was at a time when women were not allowed into the engineering profession,” Roma said, adding, “At the time, Victorian society — Darwin included — believed that women were intellectually inferior to men.”

But Emily’s older brother was supportive of her pursuits and when he went off to fight the Civil War she met and married one of his fellow soldiers who was as well. His name was Washington Roebling, son of the famous bridge designer John Roebling.

At the time John had been tapped to build a bridge between the two bustling cities of Brooklyn and Manhattan. Knowing that this giant project would be part of their lives for the foreseeable future, the newlyweds went to Europe to study a new method of building the foundation for the supports for a bridge using what are called caissons. These are huge metal “bells” that create underwater caverns when they are dropped into place and air is pumped in to displace the water. 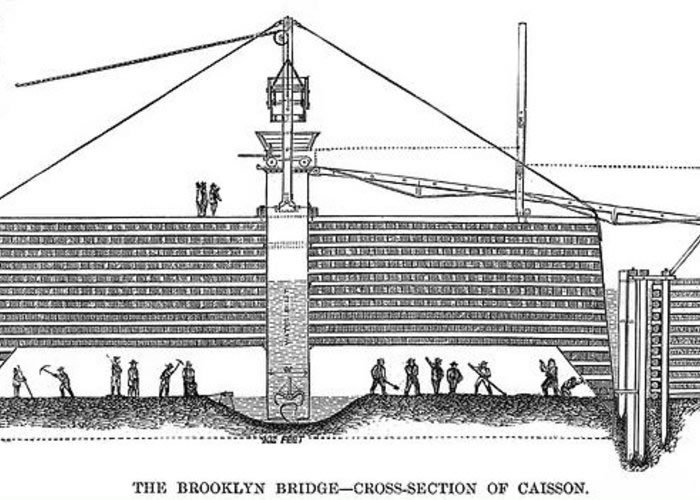 Just before construction started on what would become the Brooklyn Bridge, John Roebling caught his foot during a site visit, contracted tetanus and died in agony a few weeks later. Washington then took over the project with Emily constantly by his side. This wasn’t the end of the drama, but rather the beginning of it.

The next hiccup in the process came when her husband experienced poor health due to his work on-site. “Going back and forth from these underwater workstations was treacherous, especially because workers tended to get caissons disease, or what we know now as the bends,” Roma told the crowd in her speech. This rendered Washington disabled and forced Emily to do much of the work of managing the project in her husband’s name.

During the fourteen years it took to complete the now iconic bridge Emily had to deal with lawsuits, political wrangling and personal attacks. She worked diligently, always under the name of her husband in order to not stir up any controversy for a woman being in this role. Ultimately she was triumphant and escorted the president during his ceremonial first crossing of the competed span.

The reasons that this story is one of Roma’s favorites has to do with her passion for supporting women and minorities in the engineering profession. She has sat on the Diversity Panel of the Construction Industry Council, was part of Marks and Spencer’s Leading Ladies Campaign and regularly speaks on the topic of diversity and inclusion in the sciences.

But, more than just her gender, Emily was a great reminder that big projects, especially innovative ones, need a lot more than just technology. The interpersonal aspect of changing the world is often overlooked. Emily was able to not only perform the mathematics but was able to keep the project together against all odds. That is why it is important to remember not only the technologies that change the world, but the personalities that were able to enact the change. As Roma says, “What we do in the property industry isn’t about land or buildings, but about the relationships between people.”