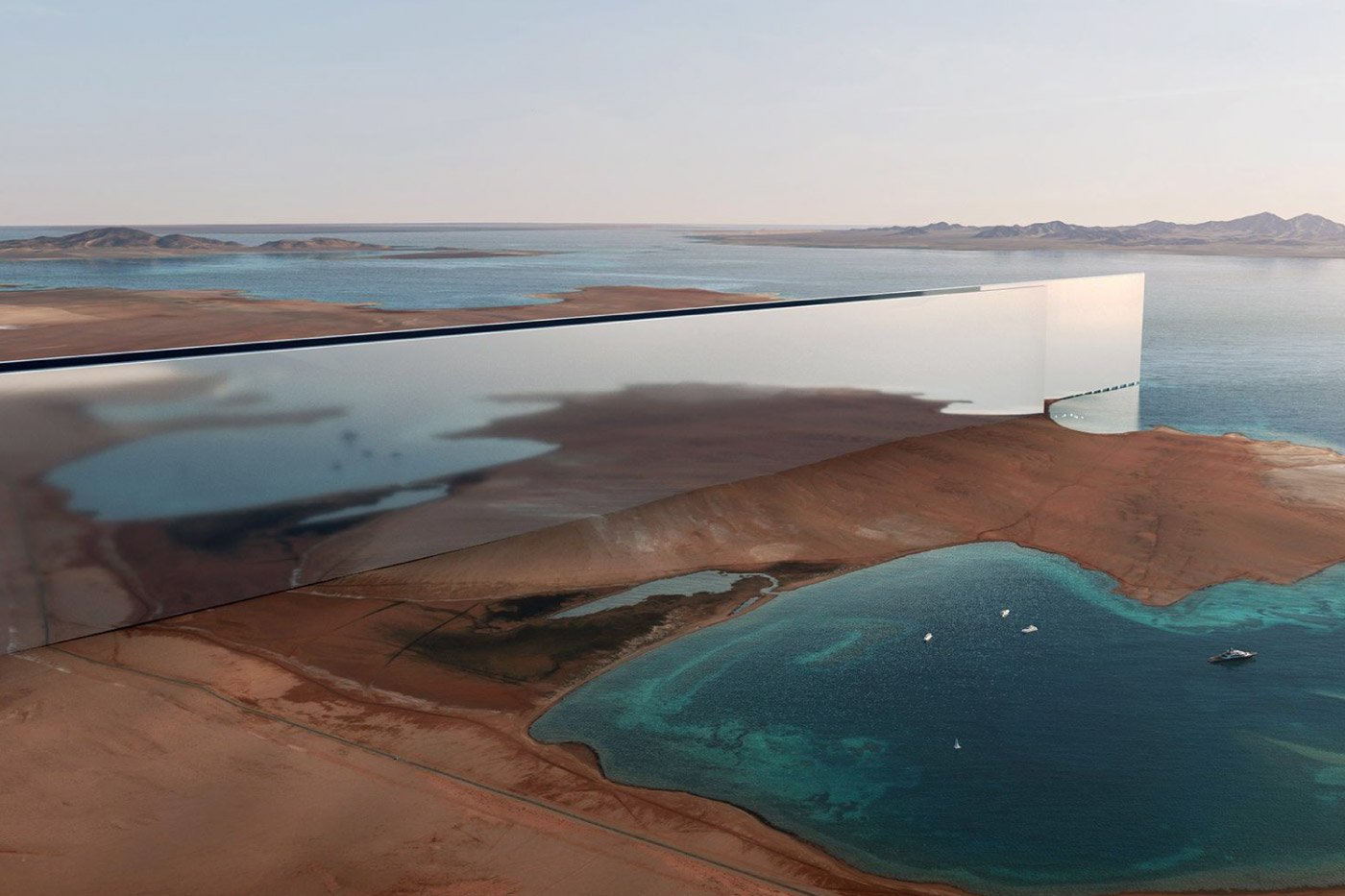 The promises behind this vertical metropolis, pointedly called “The Line,” is just as glossy as the mirror coating that will envelop it. The Crown Prince of Saudi Arabia was practically grinning when he announced the futuristic project last year. The Line is one of the main attractions of Neom City, the very first smart city in Saudi Arabia, a mega-project in itself. The whole initiative behind Neom, and subsequently The Line, stemmed from Saudi Vision 2030, a strategic plan to diversify Saudi Arabia’s economy, lessen its reliance on oil, and expand public service areas like health, education, infrastructure, leisure, and tourism.

Rejecting the idea that urban cities must sprawl outward, The Line is a whimsical division of the professed utopia that Neom will offer. It’s bold, it’s ambitious, and it’s certainly shiny, but underneath that inspiring facade, this city (if it somehow gets finished) will have rules of its own, rules that will dramatically change the way real estate transactions are handled in Saudi Arabia.

Line of the times

It’s clear that The Line is expected to shake things up along the Red Sea. Essentially the world’s most ambitious skyscraper, The Line, is slated to stand taller than most of the world’s high-rise buildings. A continuous stretch of 1640-feet-high and 656-feet-wide structure will span 100 miles of remote desert and mountain terrain and will be home to 9 million residents. We could spend a considerable amount of time poring through the laundry list of amenities The Line is expected to offer, but highlights include free WiFi, a year-round temperate micro-climate with natural ventilation, and hanging gardens in every direction.

The narrow city will run completely on renewable energy, a huge departure from the oil-dependent economy that Saudi Arabia currently thrives on, with no cars, no streets, and no carbon emissions either. Residents can either strut to their destinations or jump on a hyper-speed rail that runs throughout The Line, both of which are key selling points to support the human-centric pitch MBS is touting. As walkability seems to be the secret sauce to happiness in residential neighborhoods, the city’s unusual shape will supposedly constitute the most walkable development in history, and residents will be able to fulfill any day-to-day task within a 5-minute trek. On the rail, residents will be able to get from one end of the city to the other in 20 minutes.

When The Line was first announced, vocal technocrat and de facto ruler of Saudi Arabia Mohamed bin Salman, widely known as MBS, praised it as “a civilizational revolution that puts humans first.” Of course, that’s a promise coming from the man who tops multiple lists for human rights violations. But MBS insists that not only will The Line provide the tech-driven respite his subjects so desperately need, but it’s also the most cost-efficient form of architecture. According to MBS, challenging the conventional horizontal city structure by building a tall and skinny municipality will yield a 30 percent reduction in infrastructure costs. It’s unclear where bin Salman got his numbers for that estimate, but he’s continued to emphasize The Line’s projected return on investment at every turn.

Sure, ROI as a talking point usually goes hand-in-hand whenever the subject of renewables comes up, but that’s not the main reason MBS is seeing dollar signs. In Saudi Arabia, all real estate developments and transactions must be compliant with Sharia Law, the legal system of the Islamic religion. We’ve talked about Islamic-compliant real estate in the past, but the Sharia Law that’s enforced is based in Wahhabi, a fundamentalist branch of Islam that relies on a literal interpretation of the Quran. Suffice it to say, restrictions on real estate in Saudi Arabia are a little more intense. However, Neom City will not only be Saudi Arabia’s first smart city, but it will also operate independently from Saudi Arabia’s judicial framework, with its own tax, labor laws, and judicial system. In essence, Neom is intended to become a bastion of capitalism.

Sharia-compliant real estate has its quirks. The expectations of commercial leases don’t stray very far from Western norms, though: tenants are expected to pay rent on time (although commercial rents are paid annually instead of monthly) and keep the property in good condition, while landlords are expected to keep up with repairs. But if the establishment has a bar, a bank, an insurance firm, or a casino, it will not be suitable for Islamic financing since its underlying business practices are incompatible with the moral principles of Islam. The situation is less straightforward when it comes to a multi-let property, such as a sizable commercial structure that might, for instance, house a tiny branch of a traditional bank. Sharia experts have generally agreed that Islamic financing can be used for multi-let properties in these circumstances if the percentage of prohibited activities is less than 5 percent, but again, those kinds of restrictions won’t exist in The Line.

Where the dramatic untethering of The Line’s real estate and Sharia Law really gets interesting involves real estate inheritances and foreign ownership. Inheriting real estate can be a bit of a logistical nightmare in Saudi Arabia because of the complex hierarchy involved in succession laws. Depending on who the deceased left behind. For example, if a property owner is survived by their spouse and they never had children, then the widow(er) would receive the entirety of the estate. But if the deceased is survived by their spouse and children, then the spouse would only receive two-thirds of the estate, and the children would inherit the remaining one-third amongst themselves.

When it comes to foreign nationals, the restrictions on foreign ownership have been loosened recently, although there are still a lot of them. In Saudi Arabia, foreigners are allowed to own property, but only with authorization from the licensing authority. There are certain areas, like Mecca and Medina, where foreign ownership is restricted unless the property is passed down via the family. But again, property inheritances would only be a portion of the original asset as they would be divided, either by floors or by percentages of property value, amongst the deceased’s heirs under the mandate.

There’s speculation brewing that opening Neom to global trade and an entirely different economic system would fundamentally change not only how property is inherited but how easily foreign nationals can acquire their own property. But, like Neom’s development, the specifics have yet to be hashed out. Neom was initially proposed in 2017 with the initial intention of opening in 2025, but many are expecting that date to be officially postponed from a series of setbacks, many of which came from MBS’s ever-changing whims.

The Line is, so far, expected to open in 2030, but chances are that will be pushed back as well. The mega-city is behind schedule and will likely blaze past its $500 billion budget as MBS insists on adding lavish touches like glow-in-the-dark sand along the coast. For a country deeply entrenched in a totalitarian economic system to suddenly open up an oasis of capitalism under the rule of a fickle leader doesn’t exactly bode well for sensible urban planning.

In order to fulfill the promise of a thriving walkable neighborhood, the ratios between commercial districts and available housing must reach a balance. But every time the Crown Prince turns around and demands a ski resort, the balance shifts. The Line is a finite area with very little wiggle room, so if the developers wind up putting too many retail or restaurant spaces at the expense of using space that should have gone to housing, The Line becomes less and less walkable. If it’s less walkable, then it defeats the purpose.

Mohamed bin Salman may hail The Line as the peak of human innovation, the project’s proposal and its numerous manifestations over the past few years are widely lauded as an architectural pipe dream. One Israeli scholar called The Line “insane,” telling Haaretz, an Israeli newspaper, that the project “is based on blind faith in the power of technology to solve humanity’s problems.”

As much as the Crown Prince likes to say that The Line is revolutionary, it’s been done before. In fairness, MBS may not realize that the idea isn’t so new after all because vertical cities haven’t fulfilled their potential. In 1965, Princeton University professors Peter Eisenman and Michael Graves proposed a linear city in New Jersey. Like The Line, The Jersey Corridor Project was supposed to reinvent urban design in the form of a self-sufficient wall of commercial and residential districts stacked on top of each other. However, the project remained a pipe dream as it never made it off the ground. Madrid’s Ciudad Lineal was another ambitious architectural endeavor looking to reinvent the wheel of urban design. This one managed to get developed, but as Madrid expanded, Lineal became obsolete. Now, Lineal stands as a string of shops in the suburbs, and the initial vision has faded into historical obscurity.

There’s a reason that linear cities don’t translate to the logistics of urban life very well. For one thing, circular cities are much easier to defend, something of major concern in ancient times when cities were first being formed. A circular city can encompass the most amount of surface area with the least amount of fortification. With spread comes more resources and more sustainability, which is why it may not be surprising to hear that Ciudad Lineal was heavily criticized for lacking centrality and not being self-sufficient.

Ciudad Lineal may have gone from an inspiring fantasy to just another suburb, but that doesn’t necessarily mean that The Line is doomed for failure. The Line won’t be built on the bustling streets of Europe, it’ll be built in a remote desert. There’s reason to believe that while The Line may look jarring, it’s actually the best shape to support 9 million residents in an otherwise harsh environment because an outward sprawl is out of the question.

Ambitions had fizzled out for both of the previous developments, but that’s not stopping bin Salman’s imagination. Like a pharaoh looking to erect a pyramid or a New York City mayor trying to build a new subway station, MBS is seeking a built legacy. Specifically, a built legacy on “untouched” land. MBS insists that the land that The Line will be built on is virgin land. But that’s obviously not completely the case since Saudi Arabia’s al-Huwaitat tribe sent an urgent communication to the United Nations after being displaced by the government for the project.

Already the legacy of the Crown Prince is already mired with problems as questions remain unanswered. How will the delineation between capitalism and Sharia Law be distinguished? If the rail is the only means of transportation, how clogged are we expecting the train to be at all times? How will residents of The Line’s privacy be protected? After all, The Line is supposed to be chock-full of smart everythings, including sensors and surveillance technology, and against Saudi Arabia’s authoritarian backdrop, that’s a major cause for concern. Remember, MBS is the same man who openly ordered the assassination of journalist Jamal Khashoggi for his dissidence, so it’s no surprise that the idea of constant surveillance under his rule would make people queasy.

Even taking The Line’s extravagant description out of the equation, many are skeptical that MBS’s pet project will ever make it to completion. The Line is supposed to represent an upheaval of land and energy law in Saudi Arabia, but a lot of the details seem too outlandish for it to realistically reshape the country, no matter how much its wealthy and powerful leader wants it to. A shimmering oasis of technology might look pretty in renderings, but so far, it’s looking like an absolute real estate mess.