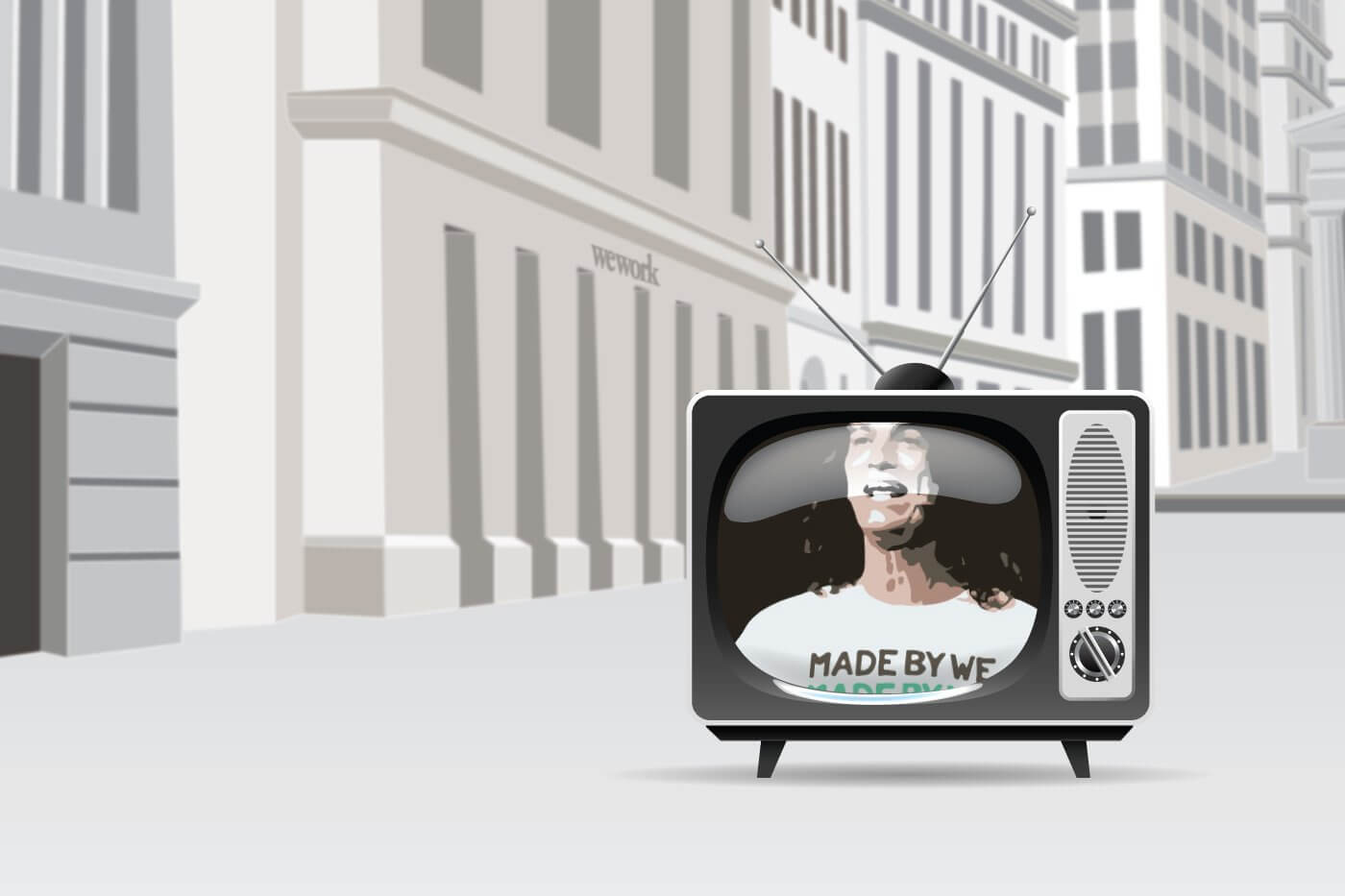 The company’s founder Adam Neumann stands in a sleek co-working space in New York City in a promo video. “Our mission is to empower the world through collaboration,” he says, looking bright-eyed and innocent.

This clip is part of the new documentary that traces the rise and fall of the co-working phenomenon, WeWork: Or the Making and Breaking of a $47 Billion Unicorn, which premieres on Hulu April 2.

It traces the rise and fall of a $50 billion valued business, as well as one of the biggest corporate flameouts and VC dramas in recent history. I spoke to the filmmaker who calls WeWork’s founder Adam Neumann a “hippie-messianic leader.”

“All of it to me it speaks as a cautionary tale from the financial perspective, it also comments on our financial system, when engines of capitalism are not always spun in the right direction,” said the director, Jed Rothstein. “Maybe we can do things differently.”

WeWork skyrocketed into a unicorn investment, then had its truth unveiled after behind-the-scenes drama bubbled to the surface—cult-like corporate culture empowered erratic management and fed the inability to criticize Neumann’s leadership style. The kimono was opened by the public fillings associated with its IPO, leading to Nuemann stepping down. WeWork took a bailout from SoftBank in October.

Rothstein said they tried to see the bigger picture from the company’s highly publicized flameout. “We looked at it from various angles and tried to get the clear story through the fog of WeWork’s IPO collapse and why,” he said, “and what can be learned from the system through the wreckage of it.”

The film starts after the stock market crash of 2008, which led to the financial world seeing tech as the answer, the whole “techno-optimism” era. Neumann was a dilettante, preaching the newfounded sharing economy, with the slogan: “We not me.” While companies like Regus did “hotdesk” co-working in the corporate world, WeWork was the Rockstar millennial version of that, it built its brand and its valuation around community, one that would empower small businesses, hip entrepreneurs, and freelancers.

The film features a group of Forbes journalists and editors speaking about the saga (the publication co-produced the film), other journalists who knew Neumann, former employees, a former lawyer and co-working folks who worked as part of WeWork’s New York community.

With the endless media reports, what new can be said? What’s new is off-the-record footage seen here for the first time. Rothstein managed to wrangle footage of Neumann making a promo video in 2019. All the outtakes were captured on a rolling camera: he farts, he jokes, he messes up multiple times. Rothstein declines to reveal where he got that seemingly internal footage but it is used as a thematic thread that runs through the entire story.

“If only I could discuss the footage…we were lucky to get that,” he said, unable to reveal the videographer. “It’s important to see someone like Adam who is always ‘on’ as less rehearsed. I just tried to take his story from the beginning, to include the whole WeWork story.”

The director hopes that he “added heart to the story.” He continued, “A  financial rollercoaster, that’s a fascinating story, which I think a lot of people would want to know a lot about. These people felt they were participating in something greater than themselves. Their stories of going on that ride are what gives it heart.”

The story reveals why this story mattered to so many people. “They had 500,000 people as part of WeWork, and roughly 15,000 employees,” said Rothstein. “I wanted to show the community side of a community company.”

The big questions center around how top-level execs get the untouchable treatment. “Are the leaders of these companies who we give so much reverence and freedom actually practicing what they preach?” asks Rothstein. Think about WeWork’s office layout: Neumann’s own office was a sprawling room with a punching bag, away from co-working and common space.

“That disjuncture between saying one thing and doing another is a cautionary element,” he said. “If you want to encourage visionary founders, make sure there’s a few people around them who can say “no.” If stuff does turn into BS, there’s someone there who can say: ‘hey this isn’t right.’”

“On the investment side, it’s a question of ask the stupid question as an investor,” he said. “Everyone says this tech company is great, its going to grow, ask ‘how are they going to do that?’ Tech companies and real estate companies have different answers.”

He adds: “Though Adam called WeWork a community of creators, at the end of the day, it was real estate. A lot of people didn’t ask these questions soon enough. The answers were not what they wanted to hear.”

For research, Rothstein looked at all the journalistic coverage, the company’s published financials and spoke to former employees and experts. But he also spoke to other sources behind-the-scenes who were unwilling to step before the camera. He calls them “highly placed people who couldn’t participate in the film, but the knowledge we gained from them helped us understand various elements of the story that were more opaque.”

It also details how Neumann disrupted the storied status quo of New York real estate. “It’s interesting how this rough and tumble business, which has been dominated by familial and established concerns, can be shaken up by a newcomer like Adam,” said Rothstein.

“His rapid rise in that world likely will raise more questions going forward—and the world of commercial real estate in New York City will be transformed by some of these trends coming out of the pandemic, and more flexible and different types of arrangements, for how commercial real estate takes shape in the future.”

But does this kind of real estate drama make good streaming? According to Hollywood, yes. This documentary traces the financial roller coaster, but it’s just a primer on Neumann until three other series are in the works. Apple is releasing a series called WeCrashed (based on the podcast of the same name), which will star two Oscar-winning actors, Jared Leto (Adam Neumann) and Anne Hathaway (Rebekah Neumann).

Meanwhile, Chernin Entertainment and Endeavor Content are creating a WeWork series based on the book “The Cult of We” by Wall Street Journal journalists Eliot Brown and Maureen Farrell, with Stephen Falk as the showrunner and Succession star Nicholas Braun playing the role of Neumann.

If that wasn’t enough of WeWork-mania, Universal and Blumhouse are preparing to make a film with screenwriter Charles Randolph, showrunner Stephen Falk and will be based on journalist Katrina Brooker’s upcoming book based on WeWork.

Neumann declined several requests for participation from Rothstein to be in the documentary. “I hope he will see it,” said Rothstein, who reckons that Neumann is still in New York. “We tried quite a bit to get him in the film, but he didn’t want to.”

The crux of the story goes against the grain of the brand’s key philosophy. “In the end, Adam chooses the ‘me’ over the ‘we,’ the selfish versus the alternative,” he said. “We understand who it affected. He wasn’t practicing what he preached. It affected a lot of people.”