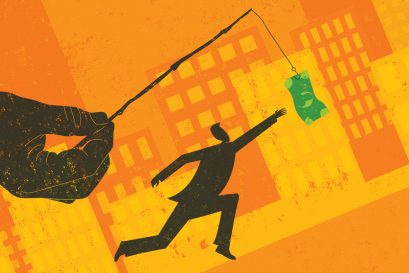 The Tyranny of NAR

Passing a test can make you a real estate agent but, in the U.S., if you want to get into residential real estate, you need to become a REALTOR® (the capitalization and trademark is their design, not mine). The terms real estate agent and Realtor have become synonymous for the general public, but they are very different. To be a Realtor, you must sign up for and pay the membership fees for the National Association of Realtors. Having the Realtor title (in all caps and trademarked, of course) isn’t the reason that agents and brokers around the country have to become NAR members, they do so in order to have access to the Multiple Listing Services (MLSs) that they service.

The idea of the multiple listing services started in the 1800s as a way for brokers to compensate each other for bringing the other party to a transaction. The commission sharing arrangement was supercharged thanks to technology, first fax and then the internet, that allowed MLS members to share listing data. Since then, MLSs have formed in almost every major real estate market and are mostly organized under the umbrella industry group NAR. These local data-sharing organizations effectively slammed the door shut for any other marketplaces for home sales. A notable exception is Manhattan where the main listing portal is run by The Real Estate Board of New York after it broke off from the National Association of Realtors in 1994.

Time passed and the internet started disrupting one industry after another with the exception of real estate. That is until 2004 when an Austin, Texas-based broker named Aaron Farmer came up with the idea of “a la carte” brokerage fees. This didn’t fit into the MLS’s flat 6 percent commission structure and was made illegal by the Texas Real Estate Commission. He got help from the U.S. Department of Justice and the Federal Trade Commission, who were both already investigating MLSs for anti-competitive activities. The case wasn’t settled until 2008 when the DOJ struck a deal with the NAR to limit these types of monopolistic practices. Part of NAR’s stipulation was a rule against “commingling” where agents without MLS access could not post to the same database as members.

It is no coincidence that 2008 was the same year where Zillow and Trulia started onboarding local MLSs onto their national online real estate marketplaces. Since then, Zillow (which went on to acquire Trulia) has had a complicated relationship with NAR. After all, why sign up for the MLS when you can just place your listing online for free? NAR used to have competing websites, realtor.com and Move Inc, but sold them in 2014 to News Corp (yes, that News Corp). Recently, Zillow was dragged into another lawsuit by the online brokerage REX. The antitrust complaint alleged a conspiracy between Zillow and NAR since MLS member listings were on the “agent listings” page and non-MLS members were relegated to the “other listings” tab. The court ruled in favor of Zillow and NAR but REX has said that they will be pursuing damages for the move.

Part of me feels like The National Association of Realtors should be able to charge for their services, just like any other business. But there are a few factors that don’t make them like any other business. First, as I mentioned in the intro, to be taken seriously as a real estate agent you need to be a Realtor. Even if you are able to find a way to market a property without the help of the MLS, you are expected to have the boilerplate forms provided by NAR’s ZipForms. These forms are updated regularly in case brokers are tempted to use an old copy from a previous transaction. Also, in order to easily facilitate entry for other Realtors into the property, you have to pay extra for NAR’s smart lock partner SentriLock. Who owns SentriLock, you ask? Why, the NAR, of course.

But the biggest problem with treating the NAR like any other business is their politics. Becoming a NAR member means funding the lobbying efforts of the nation’s third-biggest spender to political campaigns. In NAR’s defense, they do split their donations pretty evenly between Democrats and Republicans. This egalitarian approach makes them seem neutral but spreading your love around politically also means supporting a lot of candidates who their members might not agree with ideologically. Ted Cruz and Nancy Pelosi are both recipients of NAR donations, for example. The NAR fights for many noble causes, as well. This year they lobbied hard for renter assistance in order to help struggling tenants (and their landlords). But, like any political alignment, there are always gray areas. One that might surprise many NAR members is the organization’s opposition to solar financing, since many use liens against the property that can encumber it and thus make it more challenging to sell.

If you start studying the property marketplace landscape internationally, you quickly realize how unique the NAR’s hold over listing data really is. There are lots of advantages to having a powerful trade organization representing the interests of an industry. But, I would argue that the anti-competitive nature of a mandated single source of truth of for-sale properties quickly outweighs the benefits. Pretty much every expert I talk to expects the NAR’s grip on MLS listing data to continue, despite the technology companies disrupting the space. While there might be little we can do about NAR’s tyranny, we can certainly use it as a case study of why industry groups should be opt-in rather than required.