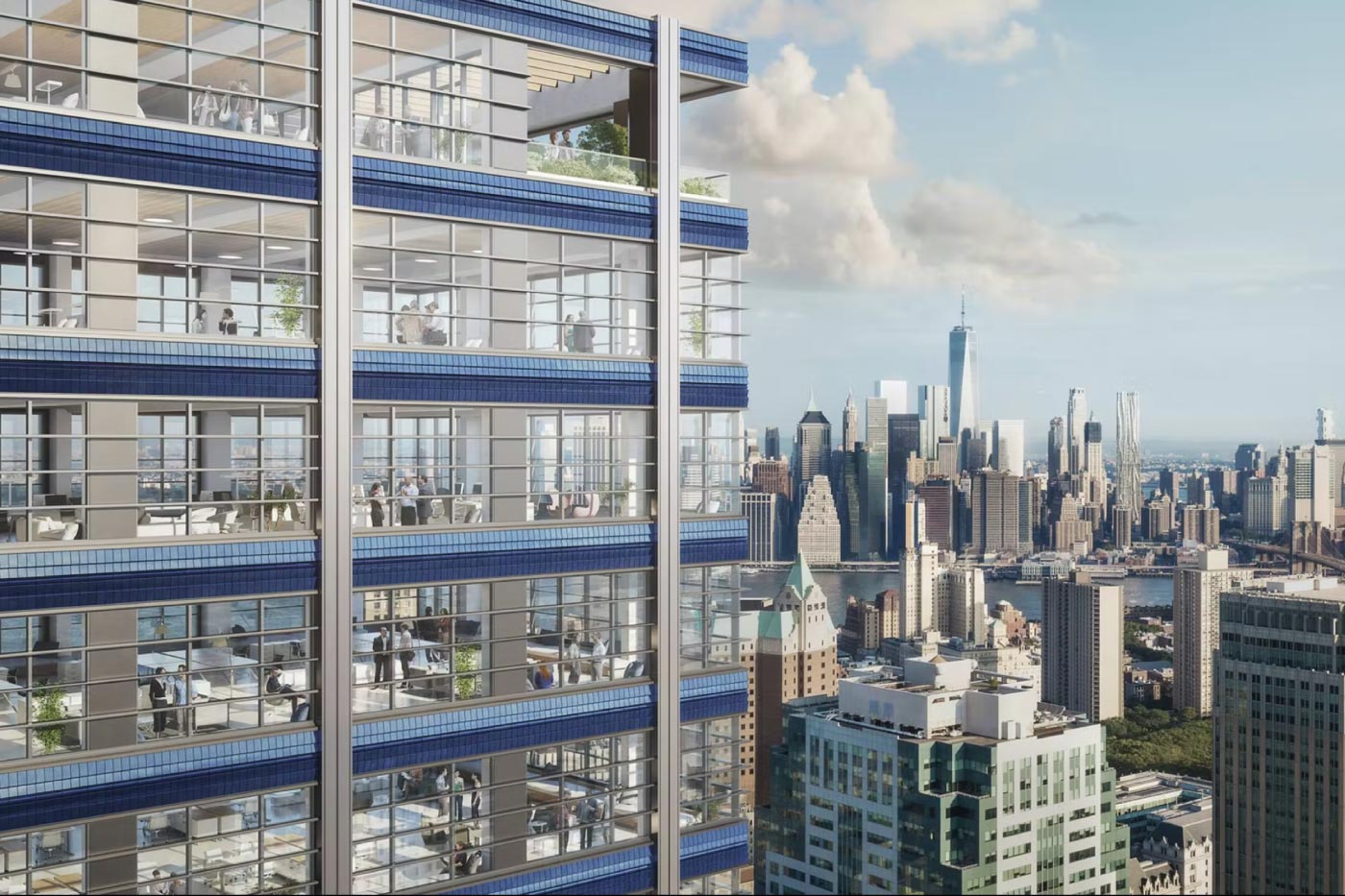 In the heart of Brooklyn’s bustling downtown district, sandwiched between a tiny historical rowhouse, a hotel, and a luxury rental building, sits the borough’s tallest office tower. While the front of the building is still shrouded in scaffolding, a large vinyl sign displays the clearest indication of what the building is to the public: 1WSQ, or 1 Willoughby Square, the first new office development in Downtown Brooklyn in a generation.

A little more than a year after the 500,000-square-foot office building officially opened in a ceremony hosted by the city (and attended by a slew of elected officials), the project is about halfway leased up, which is on track with what the developer, JEMB Realty, had hoped for. For the neighborhood, it was a long journey to get to this place, one that started with a rezoning in 2004 that opened the door for more residential and commercial development. The tower is the first ground-up office building to rise in Downtown Brooklyn since the 1990s when the 12-building office complex MetroTech Center (recently renamed Brooklyn Commons) was completed. During the building’s ribbon-cutting ceremony, former Mayor Bill de Blasio called the building’s opening “a huge turning point” in the city’s recovery from the pandemic.

Though it made a splash in New York City’s real estate circles when it was announced and then completed 4 years later, for many who live and work in the immediate area, 1WSQ looks like yet another towering luxury apartment building that dots the skyline. On one recent Friday afternoon, the area just around 1WSQ was packed with people during lunchtime. Kyaw Kyaw, a worker at the Sheraton Hotel just across the street, wasn’t aware that the 34-story building was an office tower. Between puffs from his cigarette during his smoke break, Kyaw said that he’d worked at the hotel for 8 years and had watched the area grow substantially. Peter Kat, a resident who moved into the luxury rental across the street earlier this year after spending two decades abroad, said the area looked “totally different” from what he remembered. Kat, who works from home, explained to me that all of the neighborhood’s amenities are what drew him to move there. “I’d never live in Manhattan,” he added.

The project began in 2014 when JEMB filed plans to build a 65-story residential tower on a site in Downtown Brooklyn that had functioned as a parking lot for years. Eventually, the plans for the site changed to an office building after JEMB officially purchased the development site from the city the following year. From the start, the project included nearly 400,000 square feet of office space, ground-floor retail, and a public school for 300 students on the first six floors of the building as part of a deal with the city. FXCollaborative (formerly known as FXFowle) joined as the project’s architect in 2017. JEMB landed a $235 million construction loan to finance the project the following year.

The new office tower offers numerous amenities for tenants, including outdoor spaces on multiple floors, a 250-space bike parking area, locker rooms, showers, and an amenity center with designated conference spaces and a tenant lounge. The LEED Silver building is equipped with advanced air filtration and was designed to meet the needs of creative tenants, according to the architect. FXCollaborative crafted the building as a modern take on classic New York industrial loft space, with oversized, gridded windows, column-free open office environments, and distinctive glazed-blue bricks adorning the building’s facade. “Its design promotes social interaction and natural connectivity throughout, from the amenity spaces and numerous exterior terraces to its wide-open, light-filled work environments,” the firm said of the project.

FXCollaborative, a firm that has designed towers including Lower Manhattan’s Conde Nast building and 3 Times Square, joined the 1WSQ project as the architect in 2017. Senior partner Dan Kaplan said JEMB hired his team to design the tower because they liked the vision they brought to the project. “The developer had been searching for a realization of the vision of the building,” he said. “They wanted something that would attract the creative class and was more bespoke to attract these tenants to Downtown Brooklyn.”

Company leaders had an epiphany as the team worked on the building’s design. Kaplan had been frustrated with the company’s office space in Chelsea, where they’d been for 25 years, saying that though they liked the space, they felt ‘hemmed in.’ Realizing that so many of their staff lived in Brooklyn and that luxury residential high-rise buildings were plentiful in Downtown Brooklyn, the firm decided the building was the perfect fit. “The more we thought about it, the more it dawned on us that we are the tenants,” said Kaplan, who called the neighborhood one of the most dynamic in the country, describing it as “a fascinating combination of the historic, the gritty, and the brand-new.” The firm signed a 40,000-square-foot lease for 15 years at the building, moving its headquarters last year from Manhattan to three floors at 1WSQ.

One Willoughby Square is located on Duffield Street, a historic area once home to abolitionists Harriet and Thomas Truesdell, whose home, 227 Duffield Street, is just one building over from 1WSQ, and is thought to have been a stop on The Underground Railroad. In 2007, when the city moved to seize several buildings with potential abolitionist ties to tear them down and build an underground parking garage and a park, pushback from the community eventually led the city to landmark the property. Now, the two-story home is currently undergoing preservation work. A forthcoming public park that will be called “Abolitionist Square” is set to soon be built next door.

Over the last decade, downtown Brooklyn has drawn more than 20,000 new residents, with more than 18,000 new housing units built since 2004, according to the Downtown Brooklyn Partnership. It’s been a place where significant developers have envisioned ambitious projects, like the City Point development. This 1.6 million square foot mixed-use development includes Brooklyn’s largest food hall, two luxury residential towers, a Target store, 50,000 square feet of retail space, and an Alamo Drafthouse movie theater. Just across the street from that development, developer JDS, best known for building a towering residential high-rise on Manhattan’s Billionaire’s Row and others, is behind the Brooklyn Tower, the tallest building in Brooklyn. At more than 1,000 feet tall, the condo building rises 93 stories above downtown Brooklyn.

Downtown Brooklyn is an area that has a little bit of everything. On Flatbush Avenue, one of the neighborhood’s main thoroughfares, there’s Barclays Center, a professional sports arena home to the Brooklyn Nets that opened to much fanfare in the fall of 2012. Around the corner, the Brooklyn Academy of Music, better known as BAM, dates back 150 years. The venue frequently hosts a variety of performances, festivals, movies, and cultural events. Major retail shopping corridors like Fulton Street and several transit lines converge in the neighborhood, including the Long Island Rail Road.

The only thing the area seems to be lacking is office space. “For us in Downtown Brooklyn, it’s so important to have new office uses,” said Regina Myer, president of the Downtown Brooklyn Partnership, a nonprofit that advocates and promotes the development of the neighborhood. “It’s really an exciting project that represents the ability for us to market to tech tenants, the design world, and other traditional TAMI tenants that there are great places to work here,” she said of 1WSQ.

For Myer, who came to the organization after years of running the Brooklyn Bridge Park, pushing for more office space is crucial to the future of a post-COVID Downtown Brooklyn. “The office world has been turned upside down in the last two years, but a really distinct advantage being here in Brooklyn is being so close to a talented workforce,” she said.

Brooklyn’s office market has been growing steadily for years. As more recent college graduates and young professionals moved to Brooklyn, so have companies that realized being closer to where employees lived helped cut down the dreaded commute. One of the first major companies to plant a flag was Vice Media, which set up shop in a 60,000-square-foot space in a former warehouse in Williamsburg in 2014. Others have followed since, including online marketplace Etsy, which relocated its headquarters from Manhattan to 225,000 square feet in Brooklyn’s trendy DUMBO neighborhood in 2016. Just around the block from 1WSQ, developer Savanna is nearing the completion of 141 Willoughby, a 400,000-square-foot office building that is expected to be finished next year. The 24-story office property is being designed by Fogarty Finger and is being built to achieve LEED certification.

While Brooklyn’s office market is growing in the trendy neighborhoods of Williamsburg, Downtown Brooklyn, and in hubs like the Brooklyn Navy Yard and Sunset Park’s Industry City, will new development projects like 1WSQ really be able to draw enough tenants? Office experts say it’s all in the design. While there have been major leases signed in Brooklyn like Etsy and Vice, most companies looking for space in the borough are looking for smaller floorplates. For now, and especially given the trend toward remote and hybrid work that has led many tenants to scale down their office footprints, the demand for larger blocks of space (and therefore larger floorplates) just isn’t there in Brooklyn at the moment.

Ofer Cohen, president of TerraCRG, a commercial real estate firm based in Brooklyn’s Prospect Heights neighborhood, agrees that smaller footprints are where the demand is right now in the borough’s office market. Cohen is co-chair of the Downtown Brooklyn Partnership and a big believer in Brooklyn’s office sector. He said office development is long overdue in the neighborhood. “First there was the big boom of housing built, and now there’s the beginning of OK, well people actually want to work where they live and walk to work. You can live in a nice residential neighborhood and have a nice walk to the office,” said Cohen, who himself walks to his office from nearby Fort Greene.

Cohen praised JEMB’s project for aligning with the office market demand in the area for smaller footprints rather than large, 100,000 square foot and up leases. “The 10-25,000 square foot tenants are really where most of the activity is,” he said. “It makes so much sense,” Cohen said. “It’s a no-brainer.”

Milestone projects like 1WSQ and the tenants signing on to them prove that office buildings outside of major CBDs can thrive. In fact, it’s a trend happening around the country. Philadelphia’s Spring Arts submarket is getting a lot of attention lately as a haven for creative tenants just outside the city’s central CBD. Numerous new office buildings targeting creative tenants are being developed on Austin’s East Side. It’s a trend we can probably expect to see more of as office developers look to build more projects closer to where creative talent lives.