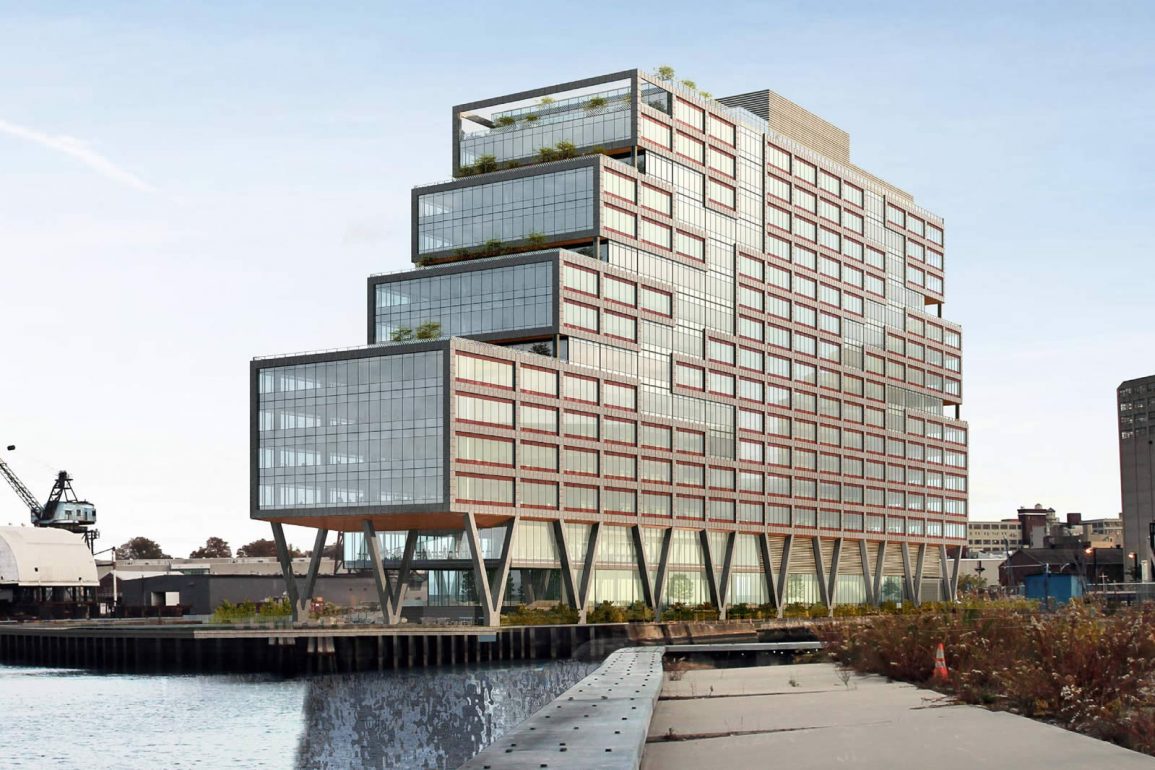 A shipyard almost as old as the United States itself? Perhaps not the most obvious choice for a cutting edge tech center in New York City. Now, two centuries after it first set to work building naval vessels, a public-private partnership is hard at work on a $2.5 billion master plan that promises to offer upwards of 20,000 new jobs in over five million square feet of space. This development is the Brooklyn Navy Yard, and its centerpiece is Dock 72, Brooklyn’s first commercial addition in over a decade and what developers Rudin Development and Boston Properties hopes will become the central spoke in the Navy Yard’s tech-centric manufacturing future.

As a public-private partnership at the intersection of economic development, real estate, manufacturing, design, and tech, numerous stakeholders with a dizzying array of backgrounds were responsible for the rebirth of the Brooklyn Navy Yard. Propmodo hosted a panel of these leaders at the recent New York City Real Estate Tech Week.

“…I think what’s at the core of our growth is that we remain focused on industrial and manufacturing companies, certainly in those buildings that we self develop,” Ehrenberg said. “…those companies are more and more part tech, part design, part hardware companies and the lines across every industry are blurring, and that’s no less true with manufacturing.”

It was this focused yet collaborative spirit that has come to express the purpose of the new Brooklyn Navy Yard. Between the existing, renovated buildings and the new construction like Dock 72, the site’s tenants are by and large involved in manufacturing or production of one sort or another, whether tech, food, sustainable products, or even film media. New Lab, the tech space run by David Belt, is a fundamental part of ensuring this harmony.

New Lab was the answer – an incubator built with a manufacturing-oriented approach. Taking residence in the Brooklyn Navy Yard’s Building 128 in 2016, New Lab now offers a fertile ground for startups to work, prototype, develop, and build.

In many ways, the reemergence of the Brooklyn Navy Yard was a perfect combination of a meeting of the minds with the ideal timing to get a project of this magnitude off the ground.

“A lot of the development that sprouted up along the Brooklyn waterfront in the last decade or two has been focused on residential, obviously given the proximity to the water and the great views of Manhattan and elsewhere,” Michael said, adding that the combination of attractive economic terms through the park’s public-private partnership, high demand for office space in New York City, and WeWork’s enthusiastic vision for the site that helped the project come together.

Indeed, WeWork’s contributions to the Brooklyn Navy Yard have been major, occupying six floors of Dock 72’s 16 total. Decked out with amenities like a wellness center and basketball court, WeWork’s role as a major tenant in the building has been a motivating and stabilizing force.

“I think with our collaboration, not just for the dedicated space but also for the amenities in the building and the relationship that we have with the developers, I think that just made us very comfortable to go into the property and be the anchor tenant and take over 200,000 square feet. So we were very bullish then, we are very bullish now, and I think [Rudin Developement] developed a phenomenal product,” Granit said.

Granit explained that WeWork has strived to provide great amenities and spaces since workers, on average, spend over 70% of their time at the office. Understanding this reality enabled WeWork to customize their design and building programming in order to offer the best office experiences possible.

WXY, who worked on the site master plan, also guided their work with a couple of fundamental observations.

“What we wound up spending a lot of time thinking about was what are the vertical manufacturing buildings of the future,” Adam said. “The site has its challenges. It was really affected by Hurricane Sandy…so thinking about that flooding constraint, and thinking about that need for parking, there was a clear desire to lift that structure, allowing parking underneath.”

Adam also explained that Dock 72 is one of an emergent class of buildings designed to allow trucks to make deliveries on the second floor of the structure.

This logistical detail belies a fundamental difference between other tech spaces and Dock 72, as well as the Brooklyn Navy Yard as a whole. Even amongst manufacturing and production-oriented startups, the space was not designed for companies still engaged solely in ideation. Rather, much of the Navy Yard’s planning went to support an ecosystem of startups and services engaged in actually building things. At New Lab, professionals like adtech developers, architects, marketers, and hobbyists searching for a makerspace were not within the project’s scope or mission.

Some might argue that this narrower focus, coupled with the site’s location in Brooklyn, might be limiting. But neither concern has materialized.

“So Navy Yard is not nearly as far as people think. We have a perception issue more than we actually have a location issue,” Ehrenberg said, adding that the area is serviced by numerous transit methods – bus, bike, or car.

Meanwhile, Belt explained that New Lab’s companies are now valued at around $1.8 billion.

New Lab is accepting applications for their space in Building 128, and WeWork is preleasing for Dock 72.