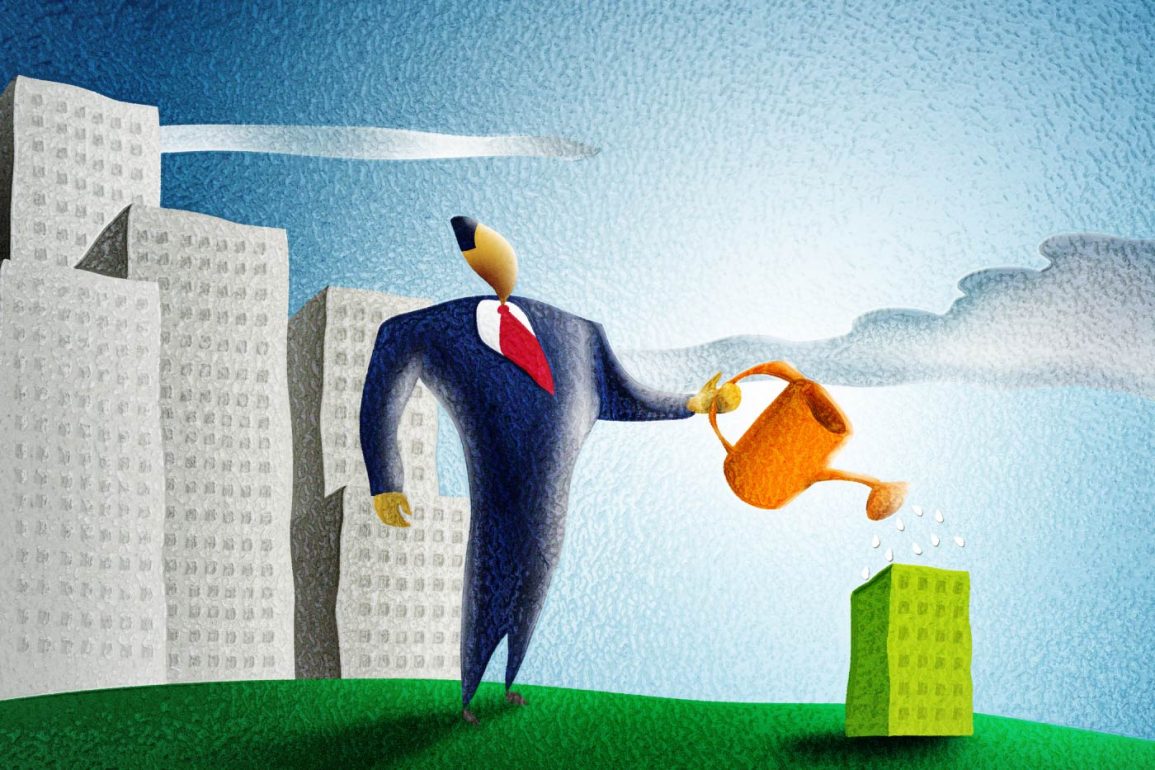 This article is the first in a four-part series about how commercial buildings are finding ways to finance sustainability projects through ‘green lending’ and other innovative green finance techniques. This first article focuses on ‘green banks’ and how they can help property owners obtain financing for clean energy projects that often have high upfront costs. The second part covers green bond offerings, which are becoming an increasing share of U.S. real estate investment trust’s (REIT’s) debt issuance. The third part takes a look at green loans, whose proceeds must apply specifically to sustainable purposes. The fourth and final part covers green tax incentives, which some say have been too weak, inconsistent, and outdated for years, but could soon get a significant boost from Congress and the Biden administration.

For many years, state and local governments used the ‘carrot’ approach to coax commercial buildings into undertaking energy-efficiency projects. Utility or regional tax credits, rebates, and other savings opportunities lowered the initial transaction cost of a project, thus spurring a property owner to replace an aging and inefficient HVAC system or install solar panels, among other fixes. But things are beginning to change. State and local authorities are putting the carrot away and pulling out the stick.

Green initiatives and regulations in places like New York, California, Washington, D.C., and Washington state are zeroing in on commercial buildings and passing mandates for measures like energy benchmarking and net-zero emissions. Institutional investors are also increasingly concerned about ESG, prompting building owners to report on what they’re doing to reduce carbon footprints. The days of kicking the energy-efficiency project can down the road because of other competing budget priorities are coming to an end. Nowadays, property owners are being compelled to make their buildings cleaner and greener.

For example, Ithaca, New York, recently announced a plan to make all 6,000 of its commercial and residential buildings reach net-zero emissions. The cost of an ambitious project of this size could be enormous, though Ithaca is developing private funding mechanisms to pay for at least some of it. Property owners everywhere are being pushed and pulled into energy efficiency projects, and they’re going to need significant sources of capital to pay for it all.

One of the ways property owners are meeting this challenge is turning to newer sources of funding. One of these are so-called ‘green banks.’ Green banks are public or quasi-public financial institutions that use innovative financing methods to accelerate and fund clean energy technologies. Another way that buildings are getting financing for sustainability upgrades are from Commercial Property-Assessed Clean Energy (C-PACE) financing. C-PACE financing is a structure in which building owners borrow money for energy efficiency, renewable energy, or other types of retrofits and make payments through an assessment on their property taxes.

Green banks and C-PACE financing both began forming around the same time about a decade ago, and they’ve been picking up more steam lately as excellent vehicles to fund CRE energy efficiency projects. The Connecticut Green Bank was established in 2011 and was the first such institution in the U.S., while C-PACE programs began to appear in 2009 and have quickly grown in popularity. There’s an increasing sense of urgency in fighting climate change and reducing CRE’s carbon footprint, and green banks and C-PACE show how the worlds of real estate, finance, and government are developing new, innovative solutions to pay for projects that’ll help in the fight. As property owners face more energy efficiency and carbon emissions regulations, it’s in their best interest to explore some of these new green lending and finance mechanisms.

For property owners, high upfront costs for clean energy and energy efficiency projects have typically made it more challenging to invest in these projects, despite the declining costs of things like solar panel installations. Historically, building owners have relied on taxpayer-funded grants and rebates. In an ideal world, private lenders would provide more financing for building energy efficiency. But there are several financial barriers to this, including interest rates that are relatively high and short loan tenors.

This is where the idea of green banks has come in. The green bank concept was initially developed as part of President Obama’s transition team in 2008 to facilitate clean energy development. The idea was part of an amendment to the federal cap and trade bill in 2009, which ultimately failed to pass the Senate. When the bill failed, green bank advocates focused on the state and local levels. Connecticut established America’s first green bank in 2011, followed by New York in 2013. As of 2018, there are 14 green banks in the U.S. with more in development, according to a report by the Green Bank Network, a membership organization that aims to foster collaboration between green banks worldwide. Internationally, the United Kingdom, Malaysia, Australia, Japan, and New Zealand have all created national green banks.

Green banks have stepped in to finance new and less-established clean energy projects that need non-traditional financing structures. To overcome barriers to clean energy development, they help property owners secure long-term, low-interest loans, and they use other techniques such as credit enhancements, co-investment, and securitization. For example, with co-investment, sometimes green banks invest directly in clean energy projects to facilitate additional private investment or improve a private lender’s financial terms. Green banks also use on-bill financing that enables building owners and consumers to repay energy upgrade loans through their utility bills, which offers security to lenders in a developing and nascent market. And despite a short track record, green banks have proven to be effective for deploying capital. In its first four years of existence, the Connecticut Green Bank stimulated $663.2 million in clean energy investment, and three-fourths of that came from the private sector.

Property owners can expect to see green banks grow like a well-tended garden in the coming years ahead. The Biden administration has introduced the framework for a national green bank (the Clean Energy and Sustainability Accelerator) as a key provision in his American Jobs Plan. The Accelerator would inject funding into state green banks, using public funds to mobilize more private investment. The primary task of the Accelerator would be to start and fund new green banks in every state using a $100 billion upfront capitalization from Congress.

Keeping up the C-PACE

One of the most effective ways green banks are helping property owners with clean energy projects is through property assessed clean energy (PACE) financing. This type of financing enables building owners to pay for energy upgrades through their property taxes, as the process places a lien on the property and the owner then repays the financing through assessments on their property tax bill. This process incentivizes private investment because it lowers the default risk on the loan, thus leading to lower interest rates for consumers. The loans are attached to the property, so when the building is sold, the new owners take over the payments.

To be eligible for C-PACE financing, a building must be in a county or municipality that has approved the program in its state and has passed PACE legislation. Thirty-seven states and Washington, D.C., have passed laws enabling C-PACE, according to market data from PACENation, a national nonprofit that advocates for PACE financing. Before financing is secured, a project must be approved by a PACE administrator and, for properties with a mortgage, consent from the mortgage lender is usually required, according to the U.S. Department of Energy. Depending on state law, the capital for a project may come from the government through bond issuances or from private investors.

One of the most significant benefits of C-PACE financing is it can cover 100 percent of the project cost over a typical 10 to 20-year term, resulting in lower annual payments that are usually less than the energy savings. A downside, though, is that C-PACE is only available to buildings where the program is offered in their jurisdiction, and not all states and municipalities have it. Getting mortgage lender consent can also be challenging and time-consuming to obtain, and the financing must be secured for individual properties, which makes it challenging for building owners who want to do portfolio-wide energy upgrade initiatives.

Nevertheless, C-PACE has quickly grown in popularity. The financing mechanism had just six deals in 2009 valued at about $3.4 million and increased to a record-breaking $677 million in 2019, according to PACENation. Over the past decade, there have been more than $1.5 billion in C-PACE investments. These numbers will likely continue to grow as more states and counties pass PACE legislation. Most projects fall in the $75,000 to $750,000 size range, but much larger projects are starting to happen, too. For example, Wafra Capital Partners and Nightingale Group recently secured $89 million in C-PACE funding to rehabilitate 111 Wall St. in Manhattan, a one-million-square-foot office property built in the 1960s.

Through programs like C-PACE, green banks are powering up clean energy and energy efficiency projects for building owners, offering favorable financial terms that enable owners to cover upfront costs and keep positive cash flows. The growing use of green bank lending is undoubtedly good for the fight against climate change, and it’s great for property owners, too. As more state and local jurisdictions pass energy-efficiency and clean energy regulations, building owners will be compelled to make upgrades, and they’ll need new sources of capital to do them. Green banks can become a helpful ally in funding projects large and small in the race for net-zero emissions buildings and a cleaner, greener building future.