From Gothic cathedrals to modern skyscrapers, are spires anything more than visual spectacle? 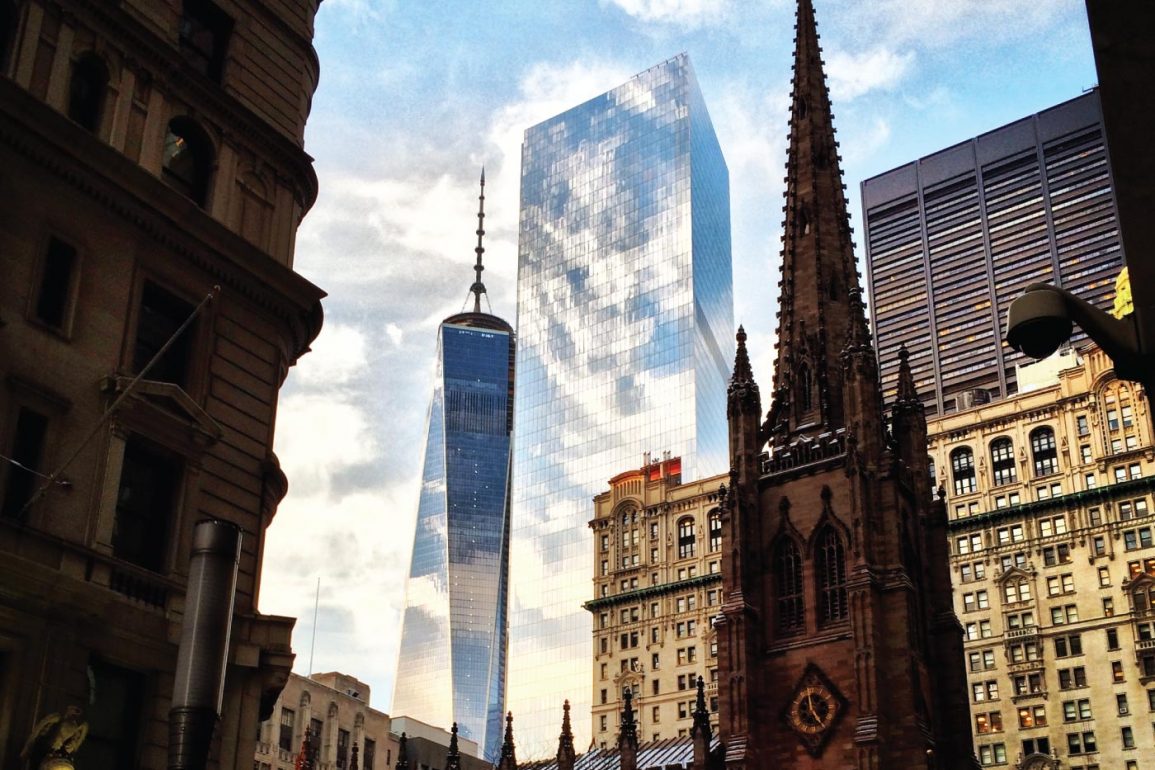 Welcome to my opinion series, The Built Environment Reviewed, where I take the time to analyze, rate, and yes maybe even gripe about my interactions with the built world. You can participate too by offering your own five-star rating after the article.

It’s been over one year now since I stared at my computer monitor in horror watching as a massive structural fire ravaged Notre-Dame de Paris. On one hand, I felt fortunate that I had been able to tour the world’s most important Gothic cathedral before it’s destruction, but on the other hand I felt heartbroken for the people of France and everyone else around the world who had ever visited the 860-year-old shrine or admired its spectacular visage from afar.

In the aftermath, the French government moved quickly to prepare for reconstruction. And despite the recent COVID-19 work stoppage, Notre Dame is apparently still on track to reopen by 2024 in time for the Olympic Games in Paris. One contentious issue, however, continues to be the Cathedral’s toppled spire, a 300-foot-tall landmark that was designed in the mid-19th century by a young architect called Eugène Emmanuel Viollet-le-Duc. His spire was a replacement for an earlier, storm-damaged spire. There is some debate now about whether or not a new spire should be a faithful replica of the original or a modern design.

Since the blaze, a dozen or more architects have offered their own ideas for the project, including Foster + Partners who envisioned a glass roof and a crystal spire. And Vizum Atelier who would see the spire replaced with a beam of light. Personally, I like the idea of updating the spire with a contemporary architectural statement that still artfully respects Viollet-le-Duc’s famed flèche (not that any Frenchman cares what I think). I mean, when I return to the cathedral, I would certainly appreciate the faithful reconstruction, but I’ll also know that it’s made of all new materials pretending to be the old Cathedral. As far as I’m concerned, there’s no harm in adding some tasteful new design elements to help memorialize the importance of our modern reconstruction effort.

I have revisited Paris a couple of times since that devastating fire. When I strolled past the barricades enclosing the Cathedral, I felt a sense of emptiness, like the feeling you get when visiting an old friend’s grave. Memories of exploring the building and its treasures came rushing back. I recalled my wife and I sitting in the pews meditating in the vastness of the main hall, crawling through the narrow passages of the now collapsed attic, imagining the hunchback Quasimodo swinging joyfully from one of the ten giant bells each bearing the name of a saint. And finally standing on the walkway between the towers, marveling at the gallery of eerie bestiary and the beautiful barbed spire that seemed to connect the Cathedral to the heavens. I have no doubt that whether the people of France decide to faithfully reconstruct the spire or build a new interpretation, it will quickly become just as revered as the old one.

You don’t have to be an important architectural and cultural gem to be crowned with a spire. The feature has also been adopted by our modern cathedral to commerce: the urban skyscraper. As a functional element, skyscraper spires act as lightning rods and broadcast antennas, but as an architectural element, they are often used to increase the apparent height of buildings to perhaps assuage the vanity of building developers and architects.

Without the vanity height that these spires provide, about 60 percent of the world’s “supertall skyscrapers” wouldn’t actually qualify as such. In fact, the world’s tallest building, Burj Khalifa, would be about 700 feet shorter. New York City is home to three of the top ten tallest spires in the world including Bank of America Tower, New York Times Tower, and One World Trade Center. Whether these spires add architectural beauty to the buildings they crown, or whether they are just cheap ways to keep up a pissing match between developers is debatable.

Though spire height has been increasing, especially since the 1970s, one of the most famous examples of skyscraper spire decadence occurred in New York City in the 1920s and 30s when automobile magnate Walter Chrysler unveiled plans for his new tower on the corner of 42nd street and Lexington Avenue. Architect William van Alen was instructed by Chrysler to make his building the tallest in the world. At about the same time, Van Alen’s former partner and now rival, H. Craig Severance, was beginning construction on a tower a couple of miles away at 40 Wall Street. Month after month, the two builders raced for the sky, often secretly altering their plans to stay ahead of each other.

Van Alen had a trick up his metallic sleeve. On October 16, 1929 he deployed what he had secretly constructed inside the building, a 185-foot-long spire. Once it was bolted into place, the gleaming silver appendage raised the Chrysler Building’s height to 1,048 feet, 121 feet taller than its downtown rival. The Chrysler Building now surpassed even Paris’s Eiffel Tower as the tallest structure in the world but 11 months later the Empire State Building’s spire would win the title. I do love the Empire State Building, but the art deco Chrysler Building’s curved roof lines and spire may be my favorite structure in the world.

More recently, another spire controversy played out. One World Trade Center, Built by The Port Authority of New York and New Jersey and The Durst Organization, has a ceremonious height of 1,776-feet thanks to it’s 408-foot spire comprising nearly a quarter of the building’s height. When it was topped-off in 2013, developer Douglas Durst proclaimed it the tallest building in the US, besting Chicago’s Willis Tower. But the owners of the Willis Tower did not relinquish the crown willingly. Their argument was that Willis is 110 stories high, compared to the 104-story One WTC and that One WTC’s spire was merely an antenna that was not well integrated into the tower’s design.

An organization known as the world’s arbiters of skyscraper height, The Council on Tall Buildings and Urban Habitat (CTBUH), deliberated the quandary. Historically, the committee of architects at the Council considered a spire part of the building’s height, but they didn’t count antennas. The spire at One WTC was originally supposed to be encased in fiberglass and steel, blending it seamlessly into the building’s design but the builders decided to simplify it due to possible long term maintenance problems. Team Willis argued that since that design was changed, the spire, which also functions as a broadcast antenna, was not eligible for height consideration.

The architect of One WTC, David Childs, pushed back saying winning is not the point. He wanted the building recognized as standing precisely 1,776 feet tall because of what the number represents. “The height is important in that it symbolizes that moment our democracy — 1776 — can’t be much more important than that,” he insisted. “The thing about race for height, that will always change. This one will always be 1,776.” Perhaps persuaded by that patriotic appeal, the CTBUH eventually ruled that One WTC stands as the tallest in the nation at 1,776-feet tall.

Douglas Durst’s patriotism doesn’t end at One WTC’s symbolic height. He also allows the people of New York City to interact with the spire. A couple of years ago, The Durst Organization created a smartphone app called Spireworks that allows users to manipulate the lights on the spire and antenna, and even add sparkles or pulses of light. The app can also control lighting on the spires of Durst’s other skyscrapers in Midtown, One Bryant Park and Four Times Square. It’s been used as a fundraising tool and even to announce the sex of an unborn baby.

One cold evening, while I stood atop the Empire State Building (arguably the world’s most famous spire) I was surprised to be invited to use the Spireworks app by a friend, Ryan Baxter, who had it installed on his phone. See, users can join only if they receive an invite from a current user, and Ryan is well-connected to New York City’s largest building owners. From our Midtown perch my wife Bethany and I, as well as my business partner and friend Franco Faraudo and his wife Marcela, enjoyed a prime view of One Bryant Park and Four Times Square while we fiddled with the spire lights via the app. The experience gave new meaning to the idea of tenant engagement and digital art. If you want your own invitation to use the app, Douglas Durst claims there’s only one guaranteed way: “Rent a lot of space from us,” he says.

Spires, in addition to sometimes feeding an architect or developer’s vanity, can also symbolize the immortal aspirations of its creators. And I don’t mean that in a sacrilegious way. I mean that sometimes we like to celebrate the significance of a place, and of a place in time, with enduring monuments. Some builders seek to leave their mark and not always for vainglory but often for the sake of homage. “Great edifices, like great mountains, are the work of centuries,” said Victor Hugo in The Hunchback of Notre Dame in reference to the Cathedral. Hugo reminds us, “Art often undergoes a transformation while they are pending, pendent opera interrupta; they proceed quietly in accordance with the transformed art. The new art takes the monument where it finds it, incrusts itself there, assimilates it to itself, develops it according to its fancy, and finishes it if it can.”

I give spires three stars. 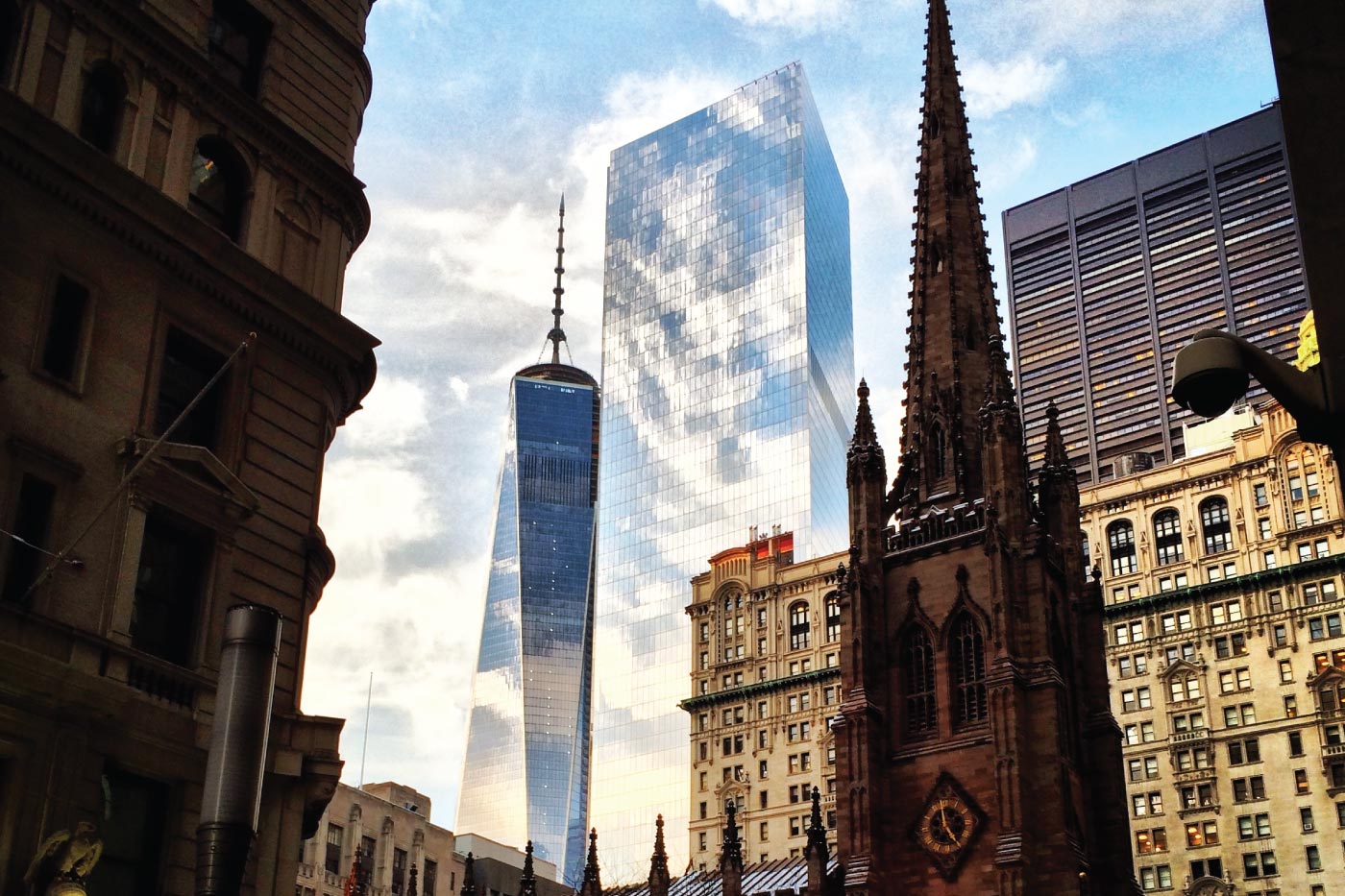