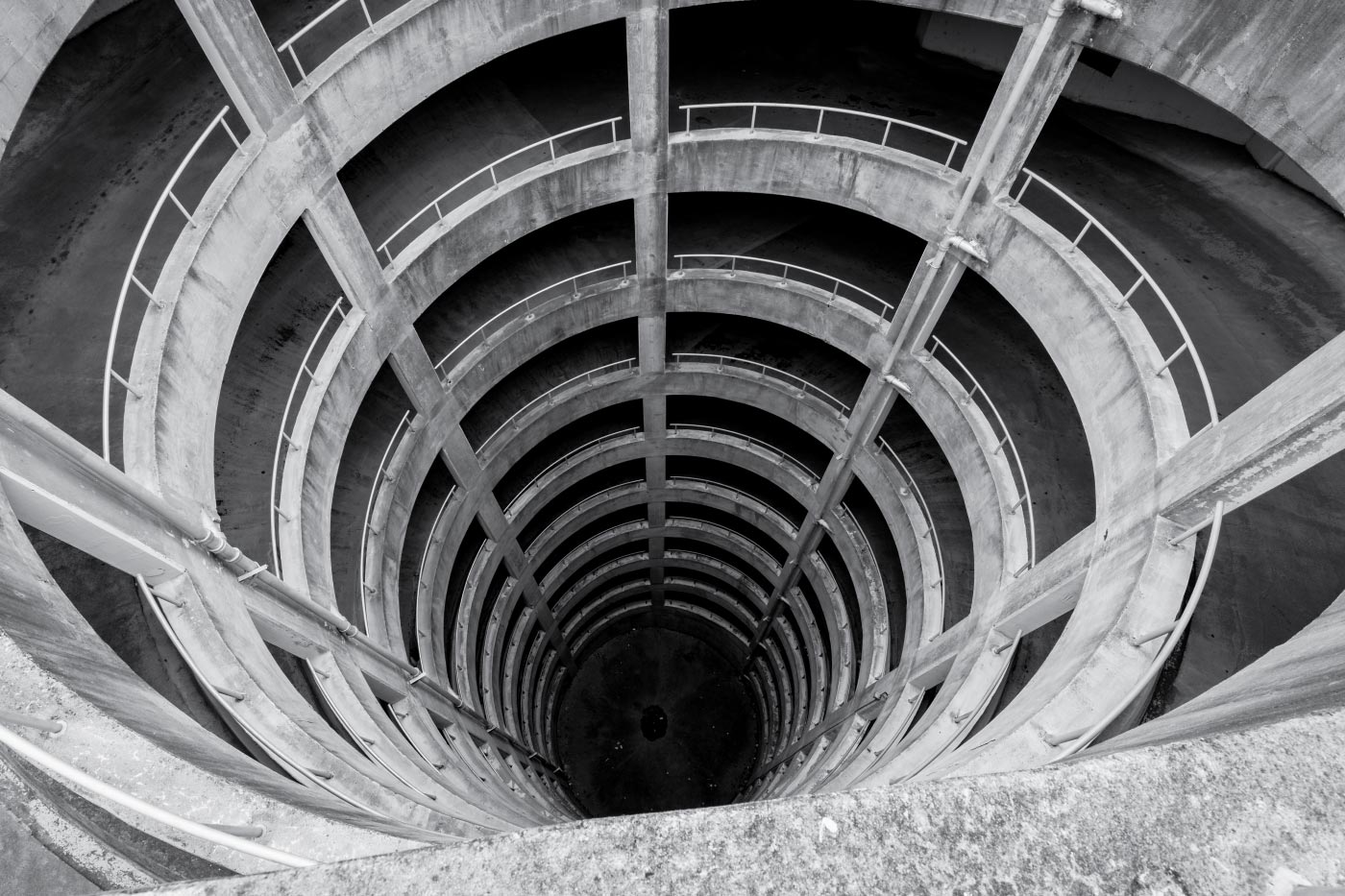 More than the detritus of a car worshiping society?

Welcome to my opinion series, The Built Environment Reviewed, where I take the time to analyze, rate, and yes maybe even gripe about my interactions with the built world. You can participate too by offering your own five-star rating after the article.

It’s about one o’clock in the morning and I’m walking back to my car after a late night hanging out with friends in San Diego’s (pre-socially distant) Gas Lamp district. The echo of pop-punk music dances off the walls of the buildings around me, broadcast from somewhere inside an eleven story parking structure. On top of the music rides the raspy scrapes and clickety-clacks of skateboards. I push open a metal door leading into the garage and join a half dozen teens and twenty-somethings waiting for the elevator like snowboarders waiting for a chairlift. Marijuana smoke wafts toward the sodium lights which bathe everything in flat yellow. The group eyes me skeptically, and we exchange friendly nods as we crowd into the elevator. One of the teens proudly shows the others a fresh road rash on his forearm. “Gnarly,” they say.

A blast of laughter and punk music, or what passes for punk these days, greets us as the elevator doors lurch open on the tenth floor, making me realize that I forgot to push the button to the fourth floor where my car was parked. But now I’m curious, so I follow the group of kids out and into a crowd of twenty or thirty other skateboarders. They are huddled in the center of the garage at the top of a car ramp that corkscrews ten stories down, shouting hoots of encouragement to each other. A spitfire girl and a boyish looking man toss their Sector 9’s and Plan B’s to the floor. They hop on the boards and disappear down the cement cyclone. The clatter of polyurethane wheels drifts up the well like the sound of distant thunder over the music.

Smash cut to me standing here at my desk, pondering on that parking garage—a building easily dismissed as the collateral damage of an automobile revolution. In pop culture, it’s depicted as a place to avoid, lest you get robbed or raped. In the movie All the President’s Men, Robert Redford, playing Washington Post journalist Bob Woodward, met his anonymous source “Deep Throat” in a parking garage. Steve McQueen chased a villain up a spiral parking ramp in the movie The Hunter before the fleeing fugitive accidentally plunged off the parking tower and into the Chicago River. We relate to the setting because these places are so familiar yet so banal. We’ve all wandered through the monotonous columns, hiked up the slanted decks, trying to remember where we parked, while keeping a wary eye out for thugs skulking in the shadows. Elaine calls out to Jerry, Jerry calls out to Kramer, George wanders off to urinate in a dark corner.

In the automobile revolution, the number of soldiers are legion. More than 1.4 billion cars crawl the roadways of the world. Billion, with a B. That doesn’t include cars rusting away in junk yards, off-road vehicles, or heavy machinery clawing away at the earth to build yet more roads and more parking structures. And it may surprise you to learn that the U.S. is no longer the largest consumer of automobiles. That distinction goes to fast-growing China, or as Donald Trump likes to say abruptly, Jina. And as the global trend of urbanization continues, all of those cars need somewhere to go when they are not clogging the roadways and belching CO and CO2 into the sky. In cities of course, many of them spend a good chunk of their idle time in those drab parking garages.

When cars first came on the scene in the late nineteenth century, they shared space in stables with their other flatulent forbearers, horses. Back then, cars typically had open tops and delicate interiors that needed to be protected from the weather. It wasn’t long before the popularity and mass production of the automobile led cities to look for dedicated solutions to their growing parking problems. Those early, purpose-built automobile garages were not dissimilar to horse stables actually. Just like the way a stable would offer feed and grooming, garages often offered maintenance and cleaning services. Some even offered babysitting while drivers shopped in nearby stores.

The first multi-level parking garage was built in 1918 for Chicago’s La Salle Hotel, though it was located several blocks away from the hotel. That parking garage was demolished in 2005. By the middle of the twentieth century, innovations in building materials led to the open-air, concrete-deck structures we use today. These garages proliferated in U.S. cities, often because of zoning laws mandating that new developments include off-street parking spaces. Interestingly, another driver of multi-level parking garage construction was the growth of suburban living. Businesses in the city needed to compete with suburban shopping centers where the parking was plentiful, so they built bigger and bigger garages.

As we all know, garages have grown quite large to keep pace with the ballooning size of airports, shopping malls, and amusement parks. It’s not uncommon for modern parking garages to house more than 10,000 cars in a single structure. The Seattle-Tacoma International Airport can hold over 13,000 cars under one roof. And it’s not just above ground structures. As the garages grew bigger and bigger over the years, they were often driven underground to hide their hideous faces. That worked out well for U.S. developers in the 1950’s and 60’s, who were able to take advantage of federal tax incentives by making garages serve a dual purpose as bomb shelters. Today, the largest underground parking system in the country contains more than 9,000 spaces hidden beneath Chicago’s Millennium, Grant and Maggie Daley Parks.

When building parking garages, just how big to make them is one of the key things developers wrestle with. Parking ratios are a critical factor for maximizing a property’s income. How many spaces are enough, considering public transportation projects, alternative transportation options, and the densification of expensive urban office space? Not long ago tenants expected three or four parking spots per 1,000 square feet of office space, but now those ratios are between five and nine spaces per 1,000 square feet. Cities that have regulated certain ratios have been directly subsidizing the proliferation of cars and by extension, creating more drivable cities but less walkable neighborhoods. We drive to a place to park and do a thing, and then to the next place to park and do something else, and then we drive an awful long way just to get back home.

Here in the age of COVID-19, you can throw all of your parking ratios off the parking deck. Garage operators have seen up to a 95 percent decline in users because of pandemic shutdowns. But they’ll be back. We love easy parking. So what does the future hold for the lowly parking garage? Increasingly, cities are mandating that above-ground garages be wrapped with retail or residential space in such a way that one barely notices those hideous garage faces from the street. Urban planners call this layout a “Texas donut.” I guess that’s nice. Developers are installing solar panels on the roof and charging stations for electric vehicles, calling them “green garages,” as if that’s a thing. At a time when many of us would like to see more walkable development, perhaps the best parking garage is the one that doesn’t have to be built at all. Instead, maybe we should look to create more housing and shopping near transportation hubs. One can wish.

Back in San Diego, inside a smokey parking garage thrumming with Fall Out Boy’s angsty power chords, I lean over a short wall that keeps cars from plummeting into the abyss of the spiral death ramp. I’m queasy as I peer into the void below. A trio of skateboarders drop into the corkscrew, skate decks locked at an angle, faces intensely focused as they slalom around the bend. All I can think is that they should be wearing helmets. A chorus of sideways glances from the crowd of teenagers tells me I’m overstaying my welcome, so I make my way back to the elevator. The doors open, disgorging another group of outlaw skaters. I ride the elevator down to the fourth floor. As I push the button on my car fob repeatedly, scanning the garage for the flash of my headlights and the chirp of my horn, I start to think that parking garages may be more than the detritus of a car worshiping society. Perhaps in our automated future, the average person may not ever see the inside of a garage (unless to skateboard or commit felonious acts) or perhaps the garage will be made obsolete by more efficient urban design, but for now, they represent a way station connecting me and my Volkswagen Atlas to the world outside my suburban home.

I give parking garages two and a half stars.