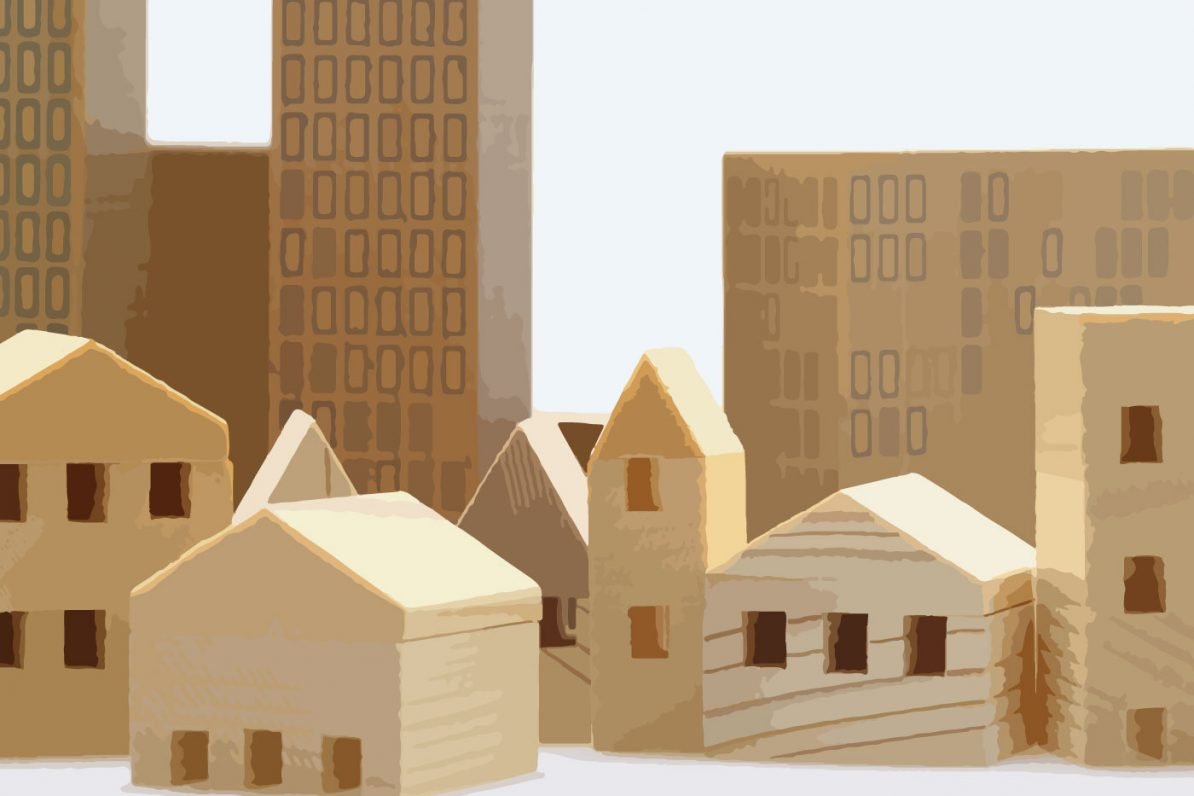 Developers have been leaning towards more sustainable real estate development for years now, as cities and states tighten up environmental regulations and investors and tenants alike grow their ESG commitments. One of the most popular materials to emerge during this time was mass timber, an engineered wood layered together by nailing and gluing multiple solid wood panels together. Mass timber structures are popping up across the country as a more sustainable alternative to the traditional concrete and steel that have been used for decades in commercial buildings, mass timber-built offices, and residential properties. The material is strong, embodies significantly less carbon than concrete and metal, and is fire-resistant. While the upside to building with mass timber is clear, until recently, building codes didn’t allow mass timber to be used to build taller structures.

But for many in the development community, using mass timber means spending more money. However, that’s beginning to change after recent code changes in several states have allowed more mass timber construction, more people in the industry become familiar with the material and how it works, and more manufacturing plants open for business.

There are several examples of mass timber residential and office buildings in the U.S. In fact, one of the best case studies on how to make building with mass timber profitable is the recently-built office building in Portland built for the engineering firm PAE. The PAE Living Building is a boutique office building in downtown Portland that is thought to be one of the largest commercial Living Buildings in the world. The Living Building Challenge is a sustainable building standard created in 2006 by the International Living Future Institute. To be certified, participating projects must meet specific goals, including showing actual performance numbers instead of anticipated or modeled figures. This means the building must be operational for at least a year before it can be evaluated for meeting the standard. The rigorous requirements are divided into seven segments: place, water, energy, health and happiness, materials, equity, and beauty. The PAE building, which opened this summer, was a team effort between developer Edlen & Co., ZGF Architects, and PAE, an engineering firm and the anchor tenant of the building. The project presented some of the biggest challenges the team project had encountered. “We knew we needed this to pencil in a way that would lead to a return for investors,” said Kathy Berg, Partner at ZGF. That meant a very finite cap for features of the project. “We actually had to make everything do two or three things so we could afford to build the building,” she said.

The project came about when PAE, staring down an expiring lease in Portland, wanted its next office to be in a Living Building, something it had already done in its Seattle office. For design, the firm brought in ZGF, who they’d worked with before on the Rocky Mountain Institute’s Innovation Center in Colorado, a project that achieved several green standards including the Living Building Challenge. “That was an easy yes,” said Berg, whose firm also decided to become an investor in the project when asked by PAE.

On the development side, PAE reached out to Edlen and Co., another partner they’d worked with before, to head up development on the project. Meanwhile, PAE, as the anchor tenant, would also serve as the design engineer for the building’s mechanical, electrical, plumbing, lighting and technical systems, and wear the owner’s hat. “It’s been a fascinating process to work through all that,” said PAE Principal Marc Brune, who was the systems lead on the project. “We’re really happy with the results. I like the building better than I expected to.”

The five-story, 58,000-square-foot office property sits within a historic neighborhood in downtown Portland and is designed to last 500 years, withstand a magnitude-8 earthquake, and is net-positive energy and water. Onsite and offsite solar—located at an affordable housing property nearby—generates 110 percent of the energy the building needs to run. As a Living Building Challenge-certified structure, it has a long list of super green and sustainable features. Rainwater on the roof is collected in a cistern just below the lobby and cleaned to drinking water standards for use in the building.

There’s a 1,500-square-foot fifth-floor “deckony”—a term coined by the ZGF design team—for office tenants and the community to grow greens and vegetables in. Within the building’s bathrooms, solid waste is sent to composters at the bottom of the building, and urine from the men’s room is made into fertilizer and sold on the open market. During the construction phase, some trees had to be removed and replanted elsewhere. But for others that were removed, the project team hired a local mill to saw down the logs and ended up using the wood for the lobby’s front desk.

With the developer, tenant/owner, and architect all on board as investors, the project started out with half the equity needed for the development already raised. The building was also located in an Opportunity Zone, which attracted more investors to the table. Opportunity Zone investors receive significant tax benefits for investing in a project for ten years. As the PAE Living Building needs a longer hold period to generate market returns, it was a good fit. Meanwhile, the anchor tenant and engineer, PAE, committed to a 15-year lease to occupy more than half of the building’s office footprint and were willing to pay a slight premium to be in a Living Building. Edlen & Co.’s Co-Founder Jill Sherman said tenants of Living Buildings like this one get added benefits, like enhanced productivity, less absenteeism, and better recruiting. “They knew that would more than offset the rent premium,” Sherman said.

While mass timber still comes at a premium, those costs were offset by reusing as many materials on-site as possible, along with some additional creativity by the PAE Living Building’s project team. The building was constructed using mass timber but with a concrete core. As the project’s engineer, PAE built the building with a chassis where they could run fire systems, wires, and more while keeping them tucked away to have a clean ceiling in the space. Then they exposed much of the wood, including the ceiling and an internal staircase. “We’ve been learning as we go because we’re relatively new to it all,” Brune said of working with mass timber. “As we worked on more of these, we’ve gotten better and better at it.” His team worked with ZGF to create a very tight envelope for the building and moved to a radiant heating and cooling floor system with tubing embedded in the floor. This eliminated the need for carpet in 90 percent of the building, which would have impeded the heating and cooling system.

While mass timber has been around for a while, it has picked up in popularity significantly over the last few years as the real estate industry’s focus on sustainability becomes more commonplace. As of September, 1,571 mass timber projects have been constructed or are in design across all 50 U.S. states, according to WoodWorks, an advocacy group for wood building design, engineering, and construction. The tallest mass timber building in the country, the 284-foot residential tower Ascent, opened in Milwaukee over the summer. Among its benefits, mass timber construction is lighter, shortens construction timelines, and quieter, according to the U.S. Forest Service. Last year, changes to the International Building Code opened the doors for a slew of states and jurisdictions in Texas to build mass timber up to 18 stories in some areas. The states adopting tall mass timber provisions include Oregon, Washington, Colorado, California, Virginia, Main, Georgia, and Idaho. Other states like Wisconsin are considering adopting the requirements. “It’s not a wave of the future anymore, it’s a current wave,” ZGF’s Berg said.

One factor holding back the more widespread use of mass timber is contractors being unfamiliar with the material. “Everyone was really afraid of it,” Berg said, adding that subcontractors didn’t want to bid on it. She cited an example of a contractor who was working on a 22-story high-rise building in Canada using mass timber and thought it would take two days to construct two floors of the building. They ended up doing it in four hours. “As soon as contractors started using it, they realized the schedule savings, that it’s easy to finish and you can cut holes in it, and make changes with it,” Berg said.

As more mass timber is used, prices will go down as a result, removing another barrier to entry. Fifteen years ago, almost no one was using cross-laminated timber or CLT. Nowadays, there are manufacturers cropping up across the country. Berg pointed to plants opening up in Utah and Texas as indications that the mass timber demand is growing. “Developers and builders are starting to understand people want to be in these buildings, and they lease up really well, and they don’t take a lot of work to maintain,” she said.

As the use of mass timber products in building construction continues to grow in the U.S., more contractors and subcontractors will get comfortable working with the materials, causing prices to come down. More states and jurisdictions are looking at adopting mass timber provisions, and federal funds from the Bipartisan Infrastructure Law and other grants are expected to go towards supporting wood programs and advancing mass timber construction as well. While using mass timber still comes with a premium, more innovative developments coming to fruition, like the PAE Living Building, where project partners invested in the building and found creative solutions to make it pencil out, can help encourage other developers who may be on the fence about mass timber to give it a shot.