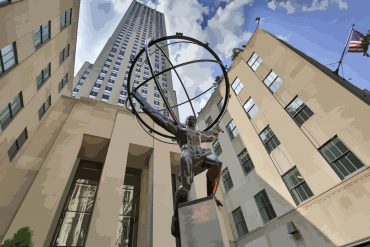 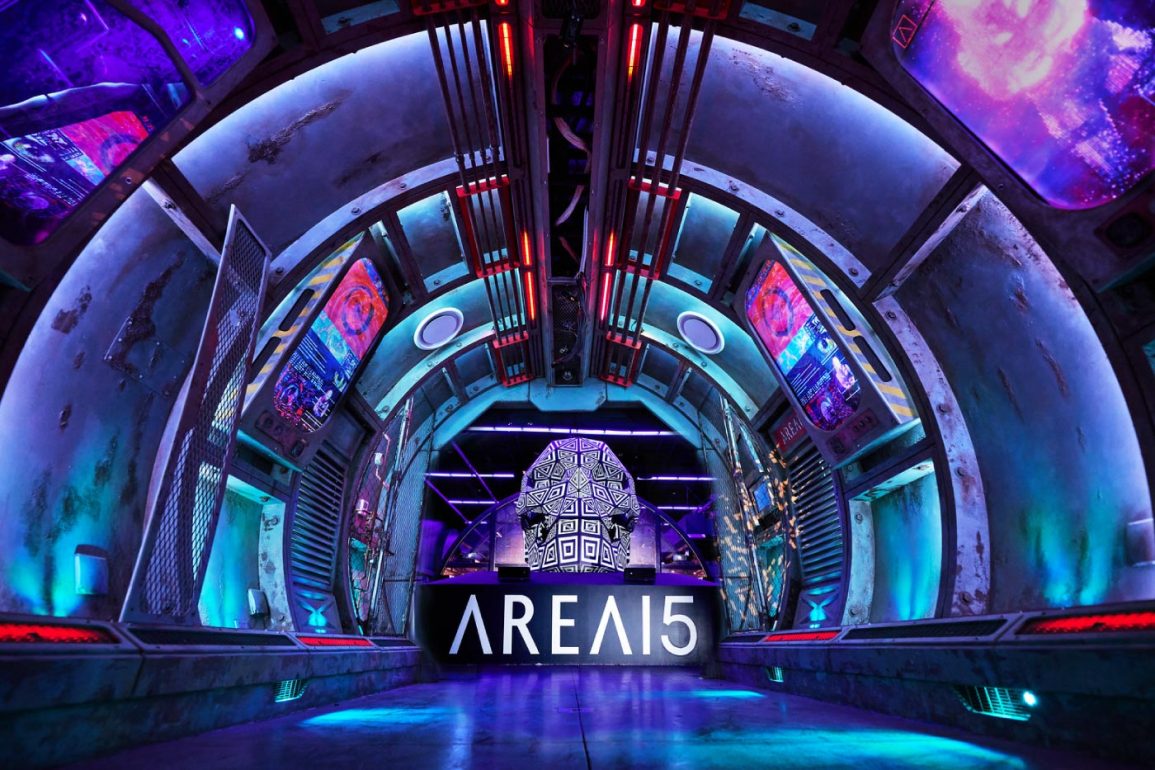 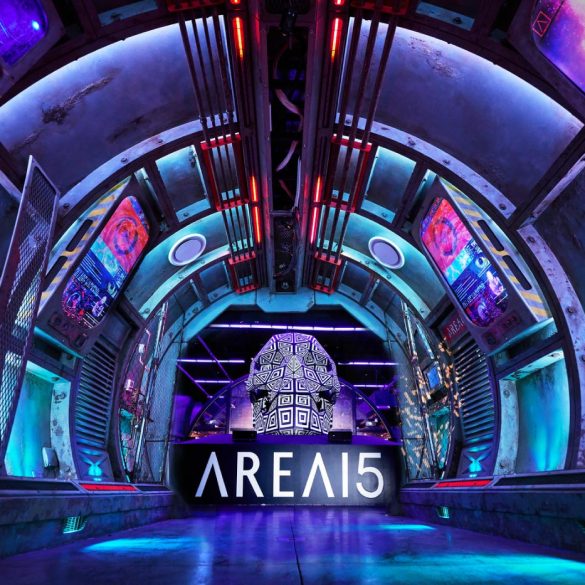 One of Las Vegas’ best times isn’t on the strip. Just northwest of Las Vegas Blvd, Area15 is an experience that grabs you as soon as you pull into the parking lot. The immersive entertainment venue is part electronic carnival and part warehouse party, combining both to create an experience you have to see to believe. An ever-shifting art, culture and technology installation, Area15 is ushering in a new paradigm of experiential retail.

Pulling into the lots the first thing you notice is a derelict airplane fuselage, reminiscent of the famous airplane graveyards of the American southwest. Your eye is soon caught by a giant multi-colored owl, a 20-ft archway of iridescent light, and a 15-foot tall dragon made of stainless steel. The Art Island, as it’s called, welcomes guests to Area15. The installation isn’t just an attention-grabbing welcome, it’s a first-ever permanent gallery for large-scale festival artwork. And everything’s for sale. The massive installations blazing in the desert sun are straight from the whimsical, weird world of Burning Man, a temporary festival in the Black Rock Desert miles from civilization that attracts tens of thousands to form a community focused on art, expression, and self-reliance. That’s all by design. Area15’s founders met at Burning Man, hatching a plan to bring a piece of the festival’s magic to Sin City. The otherworldly art installations outside prepare you for the trip you’re about to take once you step inside.

Stepping out of the hot Vegas sun into the dark spaceship-like interior of Area15’s entrance is like stepping through a portal. On the other side, a giant skull lit with morphing shapes greets you as the pumping music and neon lights hit you. The warehouse is nearly 200,000 square feet of Vegas’ famous Electric Daisy Carnival. Themed retail stores, stylistic food and beverages spots, experience vendors, and art installations subdivide the space. Overhead pumping electronic music plays and screams can be heard from the zipline ride that hangs from the ceiling.

Area15 boasts several VR experiences, including a rig to make you truly feel like you’re flying, free roam games played with full-body virtual avatars, and intense shooters that feel more like laser tag than gaming. Omega Mart is a surreal supermarket experience from Santa Fe’s art collective Meow Wolf. The Lost Spirits Distillery tour takes guests someplace else, both physically and metaphorically, to taste various spirits made on-site. Virtual golf, ax throwing, an arcade, multiple bars, a restaurant, confectionery, and an ice cream parlor ensure you never run out of something to do. Outback is a soundstage and concert space flanked by monstrous motor vehicles straight out of Mad Max.

I say this not for lavish praise but as an attempt to describe an experience that is nearly indescribable. Seeing everything Area15 has to offer in a single day is next to impossible. Giving you a reason to come back isn’t a bad thing. Entry is free on weekdays, each attraction, for lack of a better word, is individually priced and most are operated by independent vendors leasing the space. On weekend nights Area15 charges cover as the warehouse party becomes 21-and-up. Opened last year at the height of the pandemic, Area 15 is quickly catching on. Social media star Paris Hilton and Fiancé Carter Reum kicked off their joint Vegas Bachelor and Bachelorette party at Area15. Hilton posted videos of her riding the zipline through Area15 on her Instagram account with more than 16 million followers. The place was a party even on a Monday afternoon when I visited.

Making the magic happen is Chris Wink, co-founder of the worldwide phenomenon Blue Man Group. Wink’s official title is “director of content and cool shit.” An award-winning writer and Grammy-nominated composer, Wink was a highly sought-after talent.  Fisher was able to lure him to Area15 with their ambitious new vision to turn a warehouse into a curated carnival of lights, sounds, and experiences.

“I regularly encountered talented artists and heard exciting ideas every day but I was attracted to Area15 because its team comprises the right mix of not only creativity, but also business sense to ensure the complex achieves worldwide success,” Wink said.  “When I met with Area15, I quickly knew it would be my next move. And… I also love my title!”

Area15 has certainly made a splash in Las Vegas but its success is not guaranteed. Construction was delayed and the opening was pushed back more than once. Debuting during a pandemic, the 3,000 person venue had an occupancy cap of 750. Keeping content fresh and vendors, who are often competing against each other, happy, will be a challenge. Whether the immersive experience that blends retail, entertainment, and hospitality can be replicated elsewhere is a separate question. Las Vegas has a unique appetite for wild entertainment and the ability to keep guests’ pocketbooks open and spending.

If Area15 can maintain its momentum and achieve long-lasting commercial success, it will become a model for mixing experiential, immersive, and traditional retail. Similar types of immersive experiential retail are being rolled out across the country. Superblue, ArTecHouse, Illuminiarium, and the Van Gogh immersive exhibit are finding some success in other parts of the United States, but none have the scale of Area15, combining all the offerings into one. Casinos, hotels, resorts, and retail are looking for entertainment options to help bounce back after tough times. Immersive, experiential retail has a unique ability to generate organic marketing via social media posts from guests. The pandemic has accelerated retail’s need to adapt to changing customer expectations by finding new ways to get people to your physical location.

It will take time to understand Area15’s success. For now, the one-of-a-kind venue is a lesson in curating experiences worth sharing. Getting Area15 off the ground was a monumental effort, finding the right mix of immersive, experiential, artistic, and traditional retail and hospitality tenants wasn’t easy, but that’s the secret sauce. Brick and mortar retail’s success will depend on giving everyone a reason to visit, not just the tech-savvy, or the bohemian, or the party-goers. Area15 shows that successful experiential retail is about building and curating a space for thrill-seekers, ravers, and family-friendly visitors alike, enabling everyone to find something that appeals to them and giving everyone a reason to visit a place they simply have to see to believe.