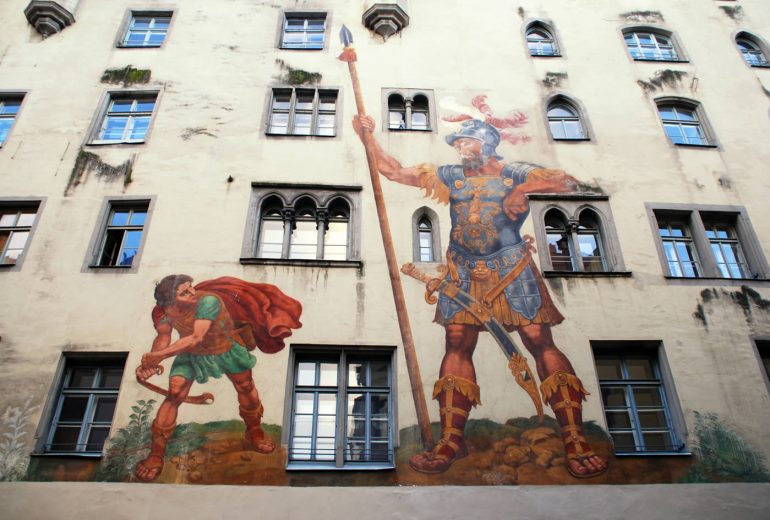 We all know the know the biblical story of David and his fight against Goliath. He has become synonymous with something small going up against something big. But no one talks about the story’s unsung hero, the sling maker.

Credit should be given to David. Call it good strategy or divine intervention, but he had the foresight to adopt a new technology before his adversary.

Still, someone had to invent and perfect his sling for him to achieve the most famous upset in recorded history.

Technology tends to benefit the little guy, giving them a force multiplier that takes the place of sheer size. The big guys tend to cling to their method. Afterall, it’s how they got big in the first place.

The hotel industry is a good example of the little guy taking advantage of technological progress. Initially, size was the only thing that mattered. Before the Internet, travelers would stay at the closest or best advertised hotel. Owning as many hotels and as much ad space as possible was the best, and really only, recipe for success. Giant hotel chains like Hilton, Marriott and Best Western became multinational behemoths by using their economies of scale.

Then, technology companies gave the small hotel owner the weapons that would even the odds. Now, consumer facing booking sites like Hotels.com, Priceline and Travelocity became the go-to places for booking hotel rooms worldwide. The little guy can now get himself in front of the same amount of customers as the huge chains.

Should we expect the same kind of shift to play out in commercial real estate? It seems like the boutique brokerages only stand to gain from the new technology that has come out in the last 5 or so years. Today, small brokerages don’t have to build their own leasing processes. They can use SaaS leasing platforms like VTS or Hightower. Also, they have access to market data at a scale that previously only the big firms were able to produce via data aggregation sites like CompStak. A new firm can cheaply and quickly bring as much technological sophistication as even the biggest, most established players.

It seems like the advantages of being a big guy should slowly get eroded. But the data does not show this. The 5 biggest brokerages (CBRE, JLL, Newmark Grubb, Cushman & Wakefield and Colliers) have over twice as much global transactions value as the next 25. So, what gives? Is it likely that we will see a rise in overall transactions for “boutique” brokerages?

I interviewed two brokers at opposite ends of the size spectrum and asked their opinion on technology and the rise of smaller firms. The first is George Pino, founding partner and managing member of Commercial Brokers International. He represents the little guy, with 9 agents that do “leasing to sales, office and retail” in the Los Angeles basin.

George sees quite a few benefits of being a smaller brokerage. “We can reposition very quickly and adapt to what there is a market for. In downturns, we generally do better, not worse.” He thinks some of that flexibility is due to the types of agents that generally hang their license with him. He explained, “We are much more commission based than a corporate brokerage, so our guys tend to be more entrepreneurial.”

We can reposition very quickly and adapt to what there is a market for. In downturns, we generally do better, not worse.

His firm, CBI, is always looking for new technologies to gain efficiencies. “We have to be more efficient than the big guys to be able to compete,” he said. When he noticed a lot of his properties being tied up in escrow by buyers who hadn’t viewed the space, only to fall back onto the market once they did, he bought all of his agents video stabilization gimbals for their cameras and phones. “Now they can produce professional quality marketing videos right on the spot, no paying for a videographer and waiting three days for the results.”

CBI was an early adopter of Xceligent, the leasing platform that spun off from LoopNet, although he still thinks, “Co-Star is still a must have for brokers our size.” When I asked him why he didn’t use CRE tech darlings VTS or Hightower he replied, “Those are platforms for brokers with hundreds of properties. We usually have four or five properties…twelve at most. We just don’t have the same needs as the guys with Class A space.”

Here he gets into the real reason the power of the big brokers has not been eroded by technology. It is because the big brokerages don’t compete with smaller ones. George admitted, “We can’t compete for Class A retail and office.” He didn’t seem too motivated to try to compete either. He quickly told me, “In L.A. Class A only makes up maybe 10% of the total market.”

Unlike George, Mike has a hyper focused business model. He represents lawyers looking to lease office space for their practices on the tenant side and institutional investors on the owner side.

According to Mike, CBRE agents have the ability to use whatever technology they choose, but when it comes to leasing platforms, the landlords call the shots. “I use VTS as my standard, but the decision is client specific. Some institutional owners see Hightower as a better option.”

Mike also admitted that he didn’t really see smaller brokers as a threat to his business. “On any given assignment I am usually competing with two other firms, usually the same brokers in the firm,” he said. When I pushed for which two firms he was referring to he responded in a tone of someone stating the obvious, “JLL and Cushman.”

To Mike, technology didn’t seem like a potential threat, “Using tech is not a differentiator at this point. If you are not using it you are behind.” George agreed, saying, “I think that initially tech gives us advantages, but in the long run it just levels the playing field.”

Using tech is not a differentiator at this point. If you are not using it you are behind.

If Goliath hadn’t died in his first fight against David, no doubt he would have showed up to the rematch with a giant sling of his own. For technology to really tip the scales of the commercial real estate profession in favor of smaller brokers, it will have to do it by changing the dynamic between institutional property owners and the brokerages they choose to represent them.

Lets re-examine our hospitality industry comparison. Long after booking sites had empowered small hotels, another technology company came and changed the definition of “little guy”. AirBnB has been able to empower even the most “nano” of hotelier. All one needs is a bed, some clean sheets and an AirBnB profile and he or she can compete with even the most well established hotel. This has fundamentally shifted the public’s perception of room and board and changed the relationship between property owner and traveler.

Maybe this is the major disruption in commercial real estate. Shifts in the office leasing paradigm have already begun. Office sharing companies like PivotDesk and co-work spaces like WeWork are changing the nature of how commercial property owners interact with those looking to lease space. Companies like Flexe are doing the same for industrial warehouse space.

For the foreseeable future large real estate holding companies, the same ones that own a large part of the Class A space, are going to lean towards big real estate firms so they can have global representation of their entire portfolio. Real estate is about relationships. Longstanding, profitable relationships are particularly hard to disrupt.

But, now a smaller brokerage can offer the same type of professional services to their clients as even the most established players. They can service landlords in their area with transparent leasing processes and high level data analytics that were once only available to large investment groups and private equity firms. So, in the end, I guess the little guy does win…depending on what your definition of little guy is.