Flexing Up: Examining the Rise of Co-Working and Space-as-a-Service

The biggest trend in the commercial real estate market over the past decade is also one of the most misunderstood. The industry can barely agree on what to call the type of office variously described as “co-working,” “flexible workspace” or “space-as-a-service.” It has also failed to grasp where it is growing and why.

Some of the debate around flexible workspaces, and what they mean for the future, has focused too much on the technology or on single players in the field. While undoubtedly influential, the industry’s one true unicorn, WeWork, is a symptom of the cause, and technology is simply an enabler of progress. But the one thing that all the market reports and predictions agree on is that the growth in flexible workspaces is being driven by customer choice, an alternative to the lease model that has dominated since its inception. Now that the genie is out of the bottle, we are witnessing a surge in market choice, with more providers offering a greater variety of workspace choices both in the type of space available and also how it is procured. In response to this, lease terms are coming down, landlords are mobilizing in their efforts to reflect changing customer demand, and market supply is adapting at pace.

Flexible workspace is at its root a change in the dynamics of the office leasing market. While still representing only a single percentage of the total office sector, its influence is spreading as does its geographical reach. While the markets of London, NYC and the Bay Area are among the world’s largest, they do not represent the fastest growing by a long shot.

In this report, we set out to analyze all of the existing research and market intelligence on flexible workspace, what it all means and where it is set to grow. First we define exactly what flexible workspace is, then we examine ways to measure its growth. From there we look at the growth trends, both by general numbers and market by market. Lastly we look at global pricing differences and investigate the sources of all this growth. 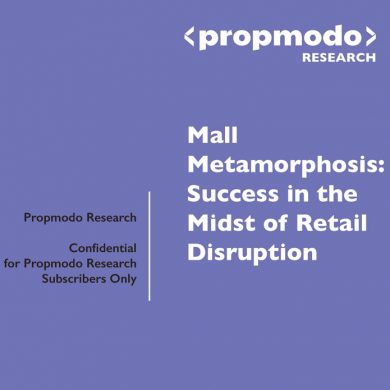 Mall Metamorphosis: Success in the Midst of Retail Disruption