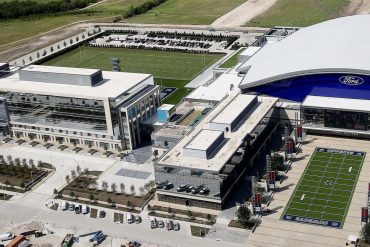 Oh, the dreaded open office layout. Most people that actually work in an open office have a complaint at the tip of their tongue because open offices are noisy and stress-inducing, so much so that they’re becoming obsolete. Even where building operations are concerned, the supposed cost-savings that the open office should yield (since the layout allows companies to offer less square footage per employee) are often outweighed by lost productivity. “A company would have to eliminate more than a month’s worth of building operating costs to pay for just two days of lost worker productivity,” said one study on the subject. In essence, open offices aren’t effective places to work because they, ironically enough, hinder collaboration. People can’t work together if their environment doesn’t allow them to feel comfortable working together. But since desks and such can be easily maneuvered in an open office, an out-of-the-box way to foster collaboration would be to periodically turn the office into a theater. By that, we’re talking about employee improv lessons.

Yes, technically improv can be performed pretty much anywhere. Yes, suggesting that employees try acting out scenes together in order to team build may be met with rolled eyes. But, it’s clear that open offices aren’t providing as much of a return on investment because employees stop communicating face-to-face in an open office setting. In an article published by Royal Society, Harvard professors Ethan S. Bernstein and Stephen Turban determined that removing spatial boundaries decreases interaction, which thereby decreases productivity. “Contrary to popular belief, the volume of face-to-face interaction decreased significantly (approx 70 percent), with an associated increase in electronic interaction,” they wrote. “It is not necessarily surprising that productivity declined due to a substitution of email for face-to-face interaction.” Those numbers are startling on their own, but what’s also surprising is the number of companies that are already using improv lessons to improve their workforce collaboration. Companies like Hershey, Vanderbilt Financial Group, Bristol-Myers Squibb, and InContext Solutions are a few big names that have reveled in the impact that improv workshops have empowered their workforce’s work capacity. In that sense, offering improv workshops in the office might give office managers the best bang for their buck.

Would acting out an improv scene really be any more painful than those corny ice-breaker questions that get tossed around at the beginning of a corporate meeting? “Tell us something about yourself” is so uncomfortably generic. Most people try to offer innocuous and easily forgettable details about themselves, and you wind up scrambling to remember their names later. “Act like an undercover cop that’s selling Girl Scout cookies,” on the other hand, has some panache. You won’t forget the name of anyone you share that silly experience with.

The zany art of improv may seem completely divorced from the world of the office, let alone reality, but that’s not actually the case. “Improv skills are about more than just making people laugh, they’re about listening, collaboration, and working to build something that is bigger than the individual,” says ImprovPlayworks, an improv school in Washington. “Whether on stage or in the office, people love to feel good about working together.” Employees who can successfully communicate with one another and create together are more productive, and original ideas between them can flow. Overall, skills gleaned from a few improv lessons will inevitably lead to a more productive work environment.

Oh, and before you think that improv is only suited for the loud and boisterous, you’d be mistaken. Improv teaches you to be humble. Yes, humble. Improv isn’t joke training, it’s collaboration training. Teams are supposed to gain a sense of pride from creating a scene together, and that sense of collaborative pride was exactly the end goal of the whole open office design.

The art of creating scenes from impulse suggestions has its place in the industry professional’s essential toolkit. “Finance professionals are making improv classes part of their own personal development plan,” writes Samantha White of Financial Management. That might raise a few eyebrows, but not to anyone familiar with the medium and its chief rule-of-thumb.

The “yes, and” principle of improv is the key to the art. It states that a player must accept anything the other player says to be true, and go with it. So if one person says “why are you making a paper mâché llama?” the other player can’t say “no I’m not.” The other person must follow that line of reasoning for the scene, the whole point is to explore the idea. So instead of “no,” the appropriate response would look something like “I’m procrastinating writing my report,” or “I forgot to buy a piñata for my daughter’s birthday,” or “SHUT THE DOOR! NO ONE IS SUPPOSED TO KNOW!”

Most improv novices get caught up in their heads trying to come up with something hilarious before the scene starts, and that prevents them from being present with their scene partners, which defeats the purpose. “Yes, and” trains participants to listen. White puts it perfectly: “To build a scene or narrative with someone, you have to listen to the ‘offers,’ or building blocks, fellow players are giving you and incorporate those elements into your response, no matter how surreal or incongruous they might seem. Someone who is not listening, or trying to deliver their own jokes, cuts off the scene.” The listening skills honed from these antics are critical to the business-partnering strategy. If you can only understand the other person’s goals and ambitions by listening to them, how else can you help them make decisions or even warn them about potential dangers?

The ability to be present is an apparent application of improv’s performance characteristics. Improv exercises allow participants to loosen up and generate ideas, so is it all that shocking that improv helps foster presentation skills? First off, improv teaches you to work through failure. Not every scene is going to get a laugh-out-loud reception, and sometimes they completely derail. But you have to keep going. It’s the same with giving a presentation. The PowerPoint can glitch, your notes could jumble out of order, or there could be any other unexpected snafu. Whatever the case, you can rely on your improv training to keep going.

How to Welcome Workers Back Without a Security Hack

In a true open office setting, executives and managers are encouraged to sit communally with the rest of the staff. This was supposed to put them in direct contact with their subordinates in order to lead more effectively, but again, if communication between one another is stifled because of a consequence of the office’s layout, then it’s counterintuitive. But, improv could help fill in that gap as well. “So much about leadership isn’t the answer, but asking the right questions,” says Lisa DeAngeles, the director of the Center for Collaborative Leadership at the University of Massachusetts. The leadership program that she runs includes improv training as part of the curriculum. “Improv really gets folks comfortable with not having all the answers and being able to think on the fly and also stop and start listening to better understand.” Again, where the open office falls short on delivering its promise, improv can pick up the slack.

Of the medley of empty sales pitches when it came to the open office, the most apparent instance of false advertising came with the notion that the open office layout would foster creativity. Once again, the actual execution of the design accomplished the exact opposite. The open office design hobbles the company’s ability to innovate. Many employees that sit in an open office “fear taking creative risks if it means everyone in the office will see their experiments or failures,” said Chicago Tribune writer Jeff Pochepan. Again, if employees aren’t able to collaborate or work effectively, how can we expect their creative juices to flow? If the intention of the open office was to enable creative risks, then incorporating improv exercises in the office might solve that problem.

The open office intended to level the playing field by putting everyone in equal view. They were supposed to foster collaboration but do the exact opposite. And they inhibit the healthy creative risk-taking that businesses need to thrive. Again and again, studies and surveys prove that the design is inherently flawed in order to work, but the design for an impromptu theater is actually perfect.