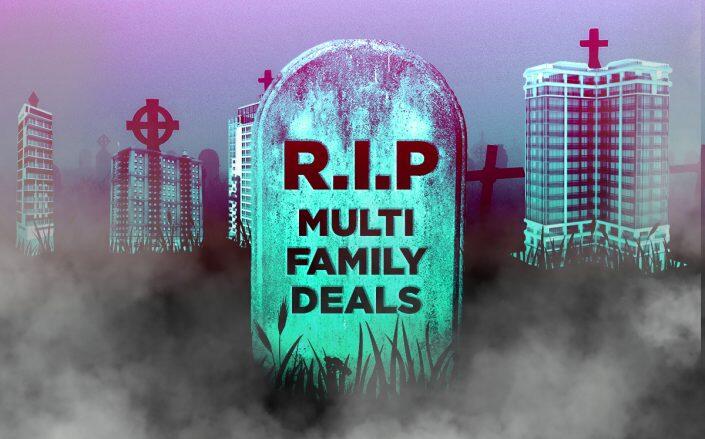 (Photo Illustration for The Real Deal with Getty)
Partner Content

Multifamily investment, buoyed through the first half of the year by rising rents, has sunk under the weight of relentless rate hikes.

In a survey of 268 multifamily executives, the trade group found 89 percent reported sales volume had fallen in the past three months.

NMHC tracks deals on a 100-point scale; a score below 50 signifies fewer transactions. That sales tracker registered in the single digits this month, just the third time since 1999 that deal activity fell that low.

The drop-off in volume comes as debt and equity financing has grown ever pricier.

The Federal Reserve is set to push through its fourth straight supersized increase of the year on Wednesday, bumping an internal another 75 basis points in an effort to make borrowing more expensive across the economy, taming inflation.

The hikes have driven the rate of a 10-year, fixed-rate, multifamily mortgage above 5 percent for the first time in a decade, CBRE’s head of multifamily debt Kelli Carhart told Wealth Management.

Meanwhile, rent growth has slowed or stopped and vacancy rates have risen in the past quarter, the trade group said, meaning investors can no longer bank on tenant demand boosting returns.

With sellers refusing to give much on pricing, the result has been fewer deals.

Two-thirds of respondents said the market had softened in October compared to July, marking the first time since January 2021 that NMHC found evidence of a slowdown.

Those conditions don’t look likely to improve in the near term.

The Federal Reserve could bump rates another 1.75 percentage points by next year, further raising the cost of borrowing.

In that environment, the Mortgage Bankers Association forecast multifamily lending would drop 7 percent in 2022 to $455 billion. Last year it was a record $487 billion.