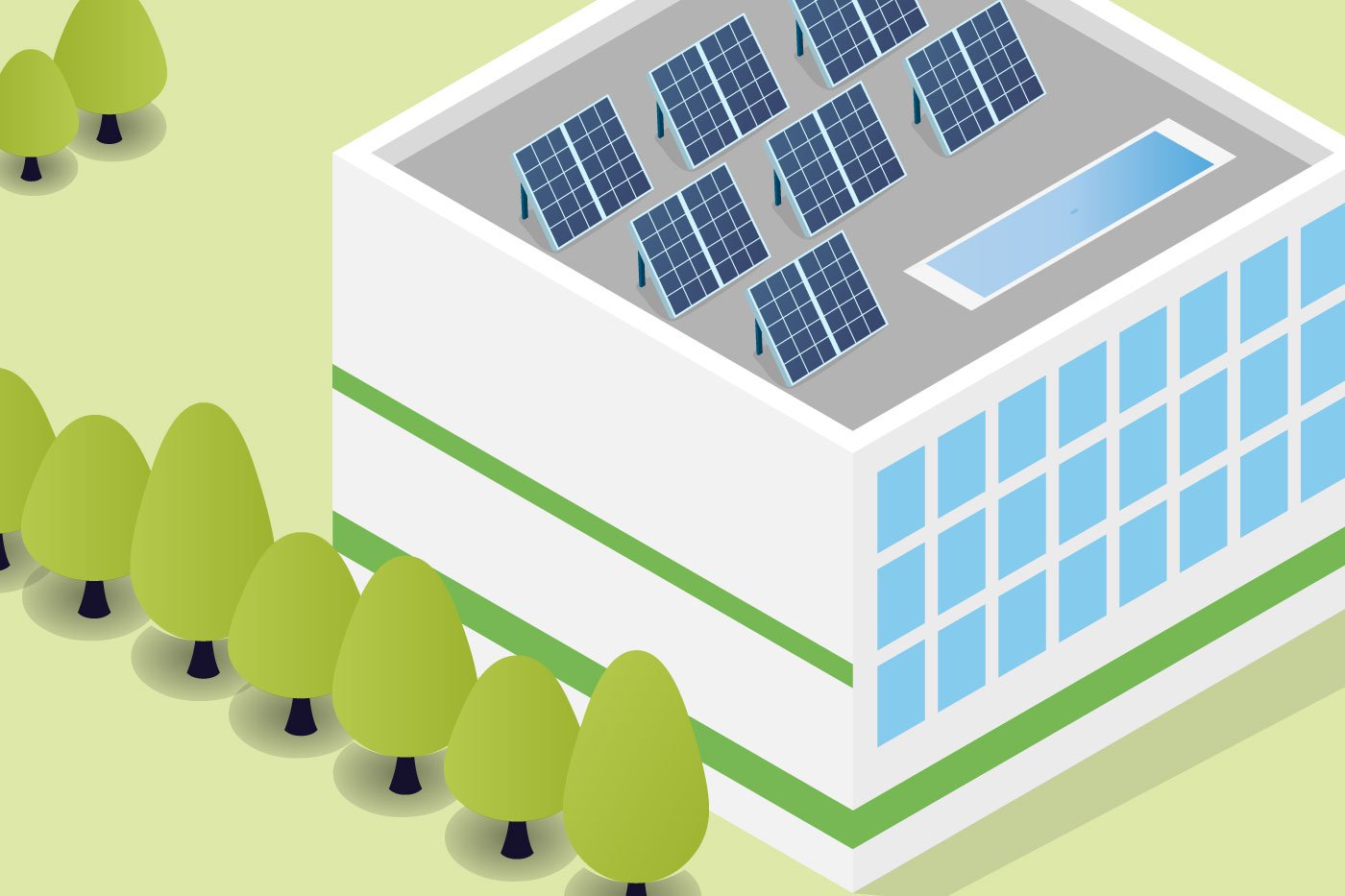 Many believe the sustainability goal of reducing energy consumption won’t be enough to help the world meet climate change objectives. More than half of humanity’s carbon emissions since records began in 1751 have happened since 1988, according to the Union of Concerned Scientists. Incidentally, the late ’80s was the same time a famous U.N. report called “Our Common Future” propelled the term “sustainability” into the mainstream. Bill McDonough, the American architect and author, once quipped that sustainable simply means ‘100 percent less bad.’

So, if sustainability isn’t good enough, what is? Engineers and architects have an idea, envisioning a future where buildings don’t just exist in the environment but integrate within it. ‘Regenerative design’ and ‘living buildings’ are the two terms being used to describe buildings that produce all of their own energy, capture and treat all water, and have a net-positive environmental impact. Buildings like this share and sell excess power to the grid, create urban agriculture opportunities on green roofs, and even ecosystems for local species that have been missing, damaged, or destroyed.

Regenerative buildings aren’t just focused on using fewer resources like energy to lower carbon footprints. The idea behind regenerative buildings is to build structures that reverse environmental damage. “Regenerative design can be a game-changer for real estate,” said Bala Vinayagam, Senior Vice President of Microgrid Line of Business at Schneider Electric. “Today, buildings consume power, but that changes if a building has solar, wind turbines, and energy storage. We often talk about energy efficiency, but we can go way beyond that.”

Vinayagam told me about regenerative design’s impact on building power and energy consumption, but the design concept incorporates many more aspects. A regenerative building can be pictured as a living, breathing, power-producing entity that improves the surrounding environment. It’s a holistic strategy that considers all building systems, including water, materials, energy, plant life, and human social systems. Regenerative buildings cause no net pollutant emissions to water, air, or land, and they’re flexible enough in design and operation to adapt as needs and conditions change.

Who needs the grid?

The energy aspect is what Vinayagam specializes in at Schneider Electric. He said regenerative buildings would be more flexible to adjust energy loads, shifting them from peak to non-peak hours. The starting point is solar power and on-site renewables and how that energy is stored. An essential first step toward reaching this goal is lowering energy loads. This can happen through more efficient HVAC systems, better insulation, a high-efficiency building envelope, natural ventilation, and high-performance glazing and appliances. Rigorous preventive maintenance of building systems helps maintain net-zero energy. Property managers of these regenerative buildings would continuously benchmark and monitor operations, maintenance, and performance.

Vinayagam described the possibility of buildings not reliant upon the electrical grid or other utility systems to operate. They still may be connected to the grid, but only to contribute excess energy from on-site power generation back to their community. This type of living building obtains all operational resources from nature like rainwater, wind, and sunlight. The building captures rainwater for interior and exterior uses and treats all wastewater on site. The Living Building Challenge (LBC) is the first building certification system that provides the design and construction guidelines for creating a building like this.

All this talk of regenerative and living buildings may sound excellent, but several obstacles stand in the way of making it a reality. New buildings can be designed for regenerative purposes from the get-go, but retrofitting older buildings is much more difficult. “The cost is initially high because older buildings weren’t designed for electrification, solar panels, the electrical wiring needed, and where to put energy storage systems,” Vinayagam said. “All these things are design constraints. But overcoming them, in the long run, it pays off.”

Another challenge to pursuing regenerative design is power utilities’ opposition. Vinayagam explained that many utilities may not want the regenerative design trend to catch on, prompting utility companies to push their own agenda instead. Utility companies have already been slow to embrace renewable energy in recent years. A study published in Nature Energy in 2020 revealed that only 1 in 10 global energy suppliers have prioritized renewables over fossil fuels. And even power companies that are investing in renewables continue to invest in carbon-heavy coal and natural gas. Some utilities create rigorous checks and balances that obstruct regenerative building design concepts. For example, Vinayagam said several microgrids across the U.S. are ready to be deployed, but utilities won’t clear them. Despite escalating grid outages throughout parts of the U.S., some municipal utilities block distributed generation to protect their revenues.

Not all utilities have done this, which offers hope for the future. For example, New York utility Con Ed worked with Bloom Energy to supply a fuel cell microgrid system for the Marcus Garvey Housing Project. Without the microgrid, the housing project would’ve depended on an overburdened local energy substation. The microgrid includes rooftop solar, battery storage, and a 400-kilowatt fuel cell system. It provides 1.1 megawatts of power year-round to the 625 apartments in the housing project, according to Bloom Energy, a provider of distributed electric generation platforms.

Microgrids will significantly factor into regenerative and living buildings, as long as power utilities allow them. There have been other positive movements in regenerative design already, too. Some highly performing regenerative and living buildings already exist. An example is the Georgia Tech Kendeda Building which earned the Living Building Challenge certification, an honor that has only been awarded to 28 buildings worldwide. The Kendeda Building generates 225 percent of the energy needed to power its electrical systems via a tight building envelope, super-efficient electrical and mechanical equipment, and a vast array of rooftop solar.

The Tech Kendeda Building collects and treats 15 times the amount of water needed for building functions thanks to their rooftop solar canopy. Not only does the canopy shade the building, it also captures rainwater. The collected rainwater trickles down to a 50,000-gallon cistern in the basement before being treated. The building is 13 percent more expensive than a comparative building at Georgia Tech, costing about $544 per gross square foot. But university officials say few buildings, perhaps in the world, can compare to this type of infrastructure for the tremendous net-positive environmental impact.

Hudson Yards in Manhattan’s far west side is another great example of regenerative design. The building complex includes 18 million square feet of development and covers seven NYC city blocks, the city’s largest private real estate development since the Rockefeller Center. The complex has a cogeneration plant that produces energy on-site, enabling staff to transfer thermal energy between buildings. The energy savings from the system amounts to a reduction of about 24,000 metric tons of carbon dioxide, matching the emissions produced annually by 5,100 cars. This microgrid also provides Hudson Yards with energy resilience; if the power grid for commercial tenants goes down, the backup power kicks in to keep the lights on.

Perhaps the most interesting part of Hudson Yards is The Public Square, a six-acre open space with roughly 28,000 plants and 200 trees. Like much of Hudson Yards, the square is built over a working rail yard, and the heat from the trains reaches up to 150 degrees. Typically, this would render any soil inhospitable to plant life. Landscape architects built a novel high-tech platform that insulates plants from the rail yard to prevent this from happening. The architects did this by circulating liquid coolants to keep the soil at the right temperature, supplying fresh air via 15 fans, and promoting wide root growth, so the soil layer doesn’t need to be too deep, according to Curbed New York.

In addition to this, the platform collects rainwater to use as irrigation. The park is a waystation for migratory birds, and the perennial blooms attract more than 225 types of bees, butterflies, moths, and even the ruby-throated hummingbird, according to The Related Companies, a real estate development firm that co-developed Hudson Yards with Oxford Properties Group. In the spirit of a living real estate complex, Hudson Yards and the park that’s part of it doesn’t just use natural resources but actively adds to the surrounding environment.

For the energy aspect, Vinayagam of Schneider Electric emphasized that buildings that move beyond sustainability to regenerative design can become ‘profitable buildings.’ Instead of just consuming power and paying utility bills, they become like their own little power plants, providing power to the grid and the community and charging for it. But it’s not just about the profitability, it’s about designing buildings with a deeper sense of the full range of a structure’s ecological and climate impact. Rating systems like LEED and BREEAM have been a good start, but regenerative and living building design goes beyond that to introduce structures that improve the environment instead of simply reducing harm.

Sustainability and energy efficiency are all about not depleting resources, but building engineers think we can take the next step. If sustainability is about harm reduction and being “100 percent less bad,” it won’t be nearly enough to help the world meet climate change goals, but regenerative design transcends the limits of energy efficiency and sustainability. This new paradigm of living, power-producing buildings could be in our future, where we may be hearing more about net-positive buildings than net-zero ones.