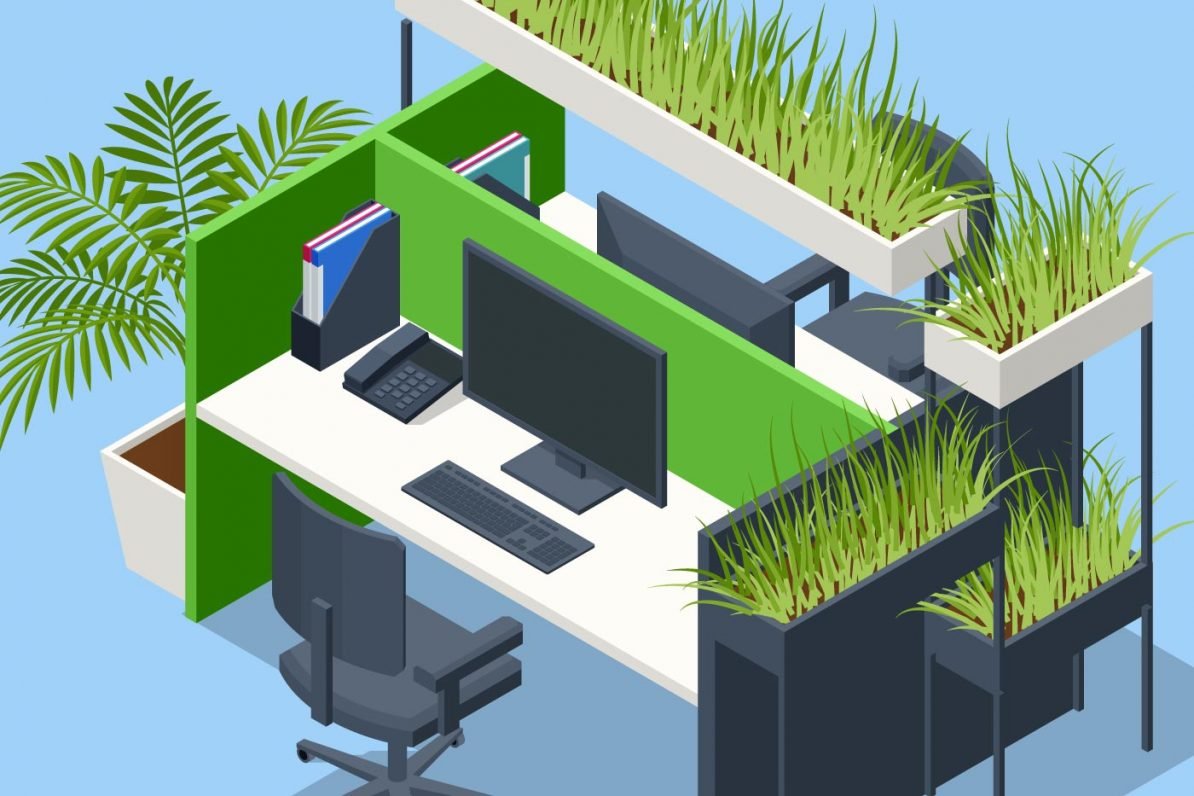 As we inch towards the third year alongside the existence of COVID-19, the pandemic’s impact seems more visible in some places than others. Restaurants and bars are crowded again, air travel has rebounded, and mask mandates have eased save for specialized facilities. Yet the dreaded virus has forever changed how people work, which means it has caused us to reconsider what the ideal office should look like. Even though by now, many of us (myself included) are tired of mentioning the pandemic, there continues to be a lot of talk about what amenities office owners and operators should incorporate into their buildings in order to remain competitive in a post-pandemic market, and rightfully so.

Even with the recent wave of layoffs and a recession due to appear any minute now, office workers continue to have significant leverage, and offices need to adapt to meet that new demand. Now that hybrid work has taken over, and employees have more flexibility to work where they want whenever they want, offices need to make a positive impact in order to entice a workforce out of their homes. From JLL’s point of view, one way to create an impactful workplace is to lean into the sustainable design—which means lots of plants. Owners and occupiers usually respond to this trend by installing a living wall or adding any other design element that has a natural aesthetic flair, but not many have gone so far as to make a new amenity altogether: an indoor park.

Outdoor space on an office property is extremely desirable, especially from a leasing perspective. A recent report from the University of Oxford, among several other studies, shows that outdoor space is a huge value driver of office space and offices with outdoor spaces where employees can wander get leased faster and command higher rents. In fact, outdoor access is such a hot commodity that Blackstone Properties constructed a 1-acre slab of grass in their massive Willis Tower renovation in hopes that it would help reignite occupancy levels and spur leasing activity. But does the idea of an indoor park have the same pull? Well, not every piece of office real estate has the luxury of outdoor square footage. That’s why developers are taking great pains to build outdoor respites on rooftops and terraces wherever possible.

Offices have placed a lot of emphasis on greenery as of late, so the inception of an indoor park seems almost inevitable. After all, an indoor park has all of the benefits of an outdoor park—fresh air, stress relief, and even an improvement in property values—but doesn’t lose its appeal when inclement weather strikes. Since so many companies are still mulling over whether or not to offload some of their office footprints since hybrid work schedules have fewer people in the office every day, there’s a case to be made that an indoor park would be a better use of real estate than an empty desk. Yet an indoor park is such an uncommon amenity that it’s not really prevalent in Class A buildings, but one mega-project nestled in the Lower East Side of Manhattan has an inside park to brag about.

The 9,000-square-foot indoor park, known as The Broome Street Gardens, is one of the many amenities inside Essex Crossing, an ambitious development nearly a decade in the making. Essex Crossing was built on one of the last remaining expanses of unused land on the Lower East Side, as the full-block lots that the complex sits on were once used as parking lots.

Before we can even get on the topic of the indoor park, we should probably touch on the sheer scale and impact of the development around it. For years, abandoned buildings and decaying vacant lots riddled the neighborhood’s litter-strewn streets, especially during the city’s housing crisis in the 1980s and ‘90s. But by the 2000s, gentrification efforts began increasing in speed as luxury developers realized that the area was only a 15-minute train ride from almost every corner of Manhattan. The area became a hot spot for high-rise bids for an affluent demographic that didn’t reflect the residents who lived there, much to their ire. But there was a relative lack of vocal opposition when it came to Essex Crossing’s development, and that’s because the biggest draw of the complex was an integration of a mixed-income housing model to accommodate a desperate need for affordable housing options in New York City.

Essex Crossing is part of a nine-building project that runs along Delancey Street. The individual building features a mix of residential and commercial space with apartments, offices, communal facilities, an urban farm, a hospital, and an indoor retail market. The full project was developed by Delancey Street Associates, a joint venture of developers Taconic Partners, L+M Development Partners, BFC Partners, the Prusik Group, and the Urban Investment Group within Goldman Sachs Asset Management. Handel Architects and the husband and wife duo behind CetraRuddy were behind the complex’s design. The entire project is expected to be fully completed by 2024, but the property buzzes with an air of excitement from recent lease signages that it almost feels like it’s open already. At least, that was the sense I got when I visited it. As of now, Retail at Essex Crossing is 90 percent leased. On the residential side, the rentals are completely sold out.

Essex Crossing has so many bells and whistles attached to it, but admittedly an indoor park is such a niche amenity, especially during a prolonged period of lower occupancy levels. With so many occupiers opting to shrink their office footprint, an indoor park sounds suspiciously experimental; as if the whole thing is more of a temporary placeholder for desk space that would be put to use in a future where office workers would finally lose their footing on their market leverage, and the 5-day, in-person workweek would come creeping back. The plants Essex Crossing had strategically placed in the garden seemed to have confirmed my suspicions. Snake Plants. Calatheas. Philodendrons. Peperomias. These were all incredibly low-maintenance plants recommended to brown thumbs that can’t seem to keep anything alive (…don’t ask me why I know that).

But it seems that the team behind Essex Crossing learned from the infamous debacle behind the Qiyi City Forest Garden development, an eight-tower apartment complex in Chengdu, China, that was advertised as an “eco-paradise” with individual gardens on every floor. The project sounded like a dream on paper, so much so that all 826 had been pre-sold before the ribbon was cut. However, only a handful of people moved in. Why? Because the developers had such a tragic lack of understanding when it came to the local horticulture that the property was swarmed with mosquitoes.

However, you’re not going to find a blood-sucking horde at the park in Essex Crossing. The developers clearly did their research on what plants would thrive in an indoor environment, would need maintenance from a gardener on a semi-regular basis, and not attract pests that would dissuade people from ever stepping into the property.

Admittedly, the indoor park is stunning. It’s a little oasis where employees can take a meeting or have a coffee break a stone’s throw away from their desks. Jane Luger, Vice President of the real estate company Taconic Partners, and my tour guide told me that the indoor park is a permanent fixture of the building. Ironically, it’s a permanent fixture built to suit a flexible need. “The park was designed to offer the buildings’ office employees a literal breathing space,” she said, pointing to one of the focuses.

But the business case for the park is a little broader than offering people a plant-laden reprieve. When Essex Crossing does open, Broome Street Gardens will be accessible to the public five days a week, as will the outdoor park outside the building that’s currently under construction. The park sits in an atrium on the market level, a spot that will get quite noisy once the property fully opens up to the public. The plants in the park have a crucial sound absorption role to play, so that park isn’t going anywhere.

Again, the park is only one of a laundry list of amenities that Essex has to offer, but according to Luger, the park is a little luxury that serves as a value-add for the office tenants’ company culture. “Amenities are what make culture,” she said, “and if the pandemic taught us anything, it’s that landlords are the ones who need to provide that.”

The ideal post-pandemic office, as far as we know, is supposed to emphasize the health and wellness of the people who use it. We already know that plants clean the air, boost morale (and, to an extent, productivity), and increase aesthetic value because, hey, they’re nice to look at. However, the developers at Essex Crossing didn’t cluster a few houseplants together in one spot and call it a “park.” The indoor park at Essex Crossing is a central fixture of the building with an intentional design behind it to serve multiple purposes, from a health booster to a noise buffer to a tiny little oasis during the workday. It remains to be seen whether or not an indoor park will really catch on as the next big office amenity, but it certainly is for one building in the Lower East Side.