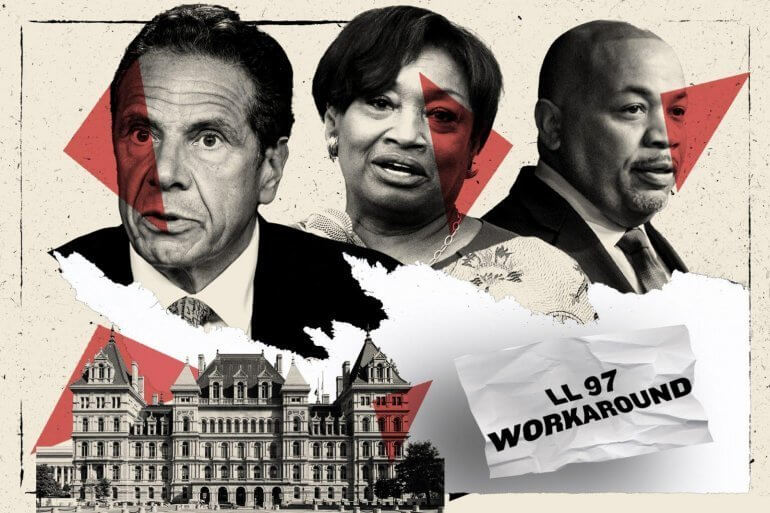 A proposed workaround to the city’s emissions cap appears dead.

The change, which would give property owners another option to offset their building emissions and avoid large fines, is not expected to be included in the state’s impending budget legislation, according to groups that have closely watched the issue.ADVERTISING

For the real estate industry, the result is a disappointment but not a surprise, given that the proposal was not supported by the Assembly or Senate and was fiercely opposed by environmental groups.

Moreover, after including it in his budget proposal, Gov. Andrew Cuomo did not seem to make the item a priority, and with scandals weakening his political position, it might not have mattered even if he had.

The workaround would have allowed property owners to use renewable energy credits generated outside the city to meet stringent emission caps set by Local Law 97. The law, passed by the City Council in 2019 and signed by Mayor Bill de Blasio, calls for a 40 percent reduction in citywide greenhouse-gas emissions by 2030 and 80 percent by 2050. Buildings larger than 25,000 square feet have to start meeting caps in 2024 or face fines running into the millions of dollars.

“Now building owners must step up and perform the necessary retrofits to meet emissions reduction standards,” Maritza Silva-Farrell, executive director of ALIGN, a group that fought the governor’s proposal, said in a statement. “These retrofits will create thousands of green jobs in low-income communities of color exposed to the biggest climate threats of the future.”

But retrofits alone would not be enough for some buildings to avoid fines, which would go into the city’s general fund and not toward energy efficiency, according to real estate groups. In particular, they say, high-density buildings that are energy-efficient, relative to their heavy occupancy and round-the-clock use, would be unfairly punished by the law.

The measure allows property owners to use energy credits generated within the city to offset their building’ emissions, but such credits do not exist because the city lacks solar and wind farms and hydroelectric plants. Landlords’ purchase of renewable energy credits from elsewhere would fund clean-energy projects in those places.

“Local Law 97 is a flawed law,” James Whelan, president of the Real Estate Board of New York, said in a statement. “If the city does not quickly make common-sense changes to allow for greater investment in renewable energy and faster environmental improvements, the state must.”

Labor groups and others floated alternatives to the governor’s plan, including limiting the application of out-of-state credits and creating a fund for efficiency and electrification upgrades in affordable housing.

The city and state still have until 2024 to tweak Local Law 97, but the omission of the governor’s budget amendment is a missed opportunity for the industry. Passing such measures as standalone legislation is typically more difficult politically.

The legislature and governor as of Thursday evening were still hammering out the budget, including rent relief and potential taxes on mezzanine debt and preferred equity, among other issues.

Meanwhile, the Assembly Judiciary Committee’s impeachment investigation now includes allegations that the governor enlisted his staff to help secure him a $4 million book deal. The committee has indicated that accusations of sexual harassment and the governor’s handling of nursing home deaths remain the focus of its probe.