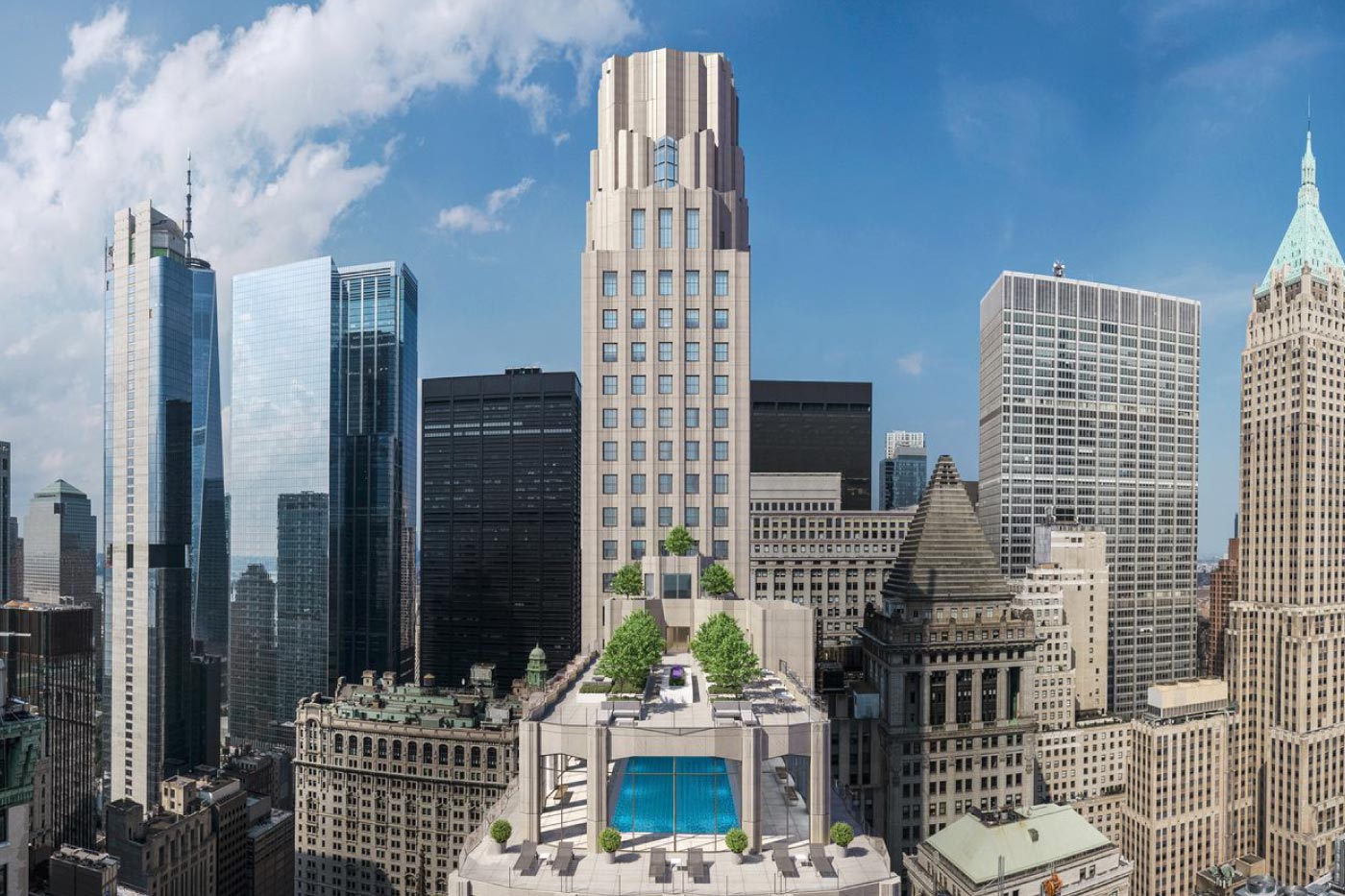 One Wall Street. The address is easy enough to remember. But that’s where the simplicity stops.

This is Harry Macklowe we’re talking about.

Known as one of the biggest risk-takers in New York City real estate, few figures are as seminal in Manhattan as Macklowe. He’s best known for building skyscrapers, office buildings, and ambitious residential developments throughout his six-decade career after he founded Macklowe Properties. He’s the man always who looks up, both to the stars and to devise a plan to add yet another floor. Among his past projects included the iconic General Motors Building which holds Apple’s flagship store (you can thank Macklowe for that giant cube out front), and 432 Park Avenue, where Macklowe had bulldozed the iconic Drake Hotel to build the third-largest residential tower in NYC, much to the ire of the neighborhood. He likes big. He likes shiny. And he likes art, so much so that his bitter divorce with his first wife resulted in a  record-breaking $922 million art collection.

The fluted limestone tower of One Wall Street is his latest odyssey. At 51 stories spanning two Manhattan blocks, it’s the largest office-to-residential conversion in New York City history. If the sheer size alone failed to convey that, the cost of the whole endeavor will. Macklowe Properties (and their equity partner, Hamad bin Khalifa Al Thani of Qatar Royal) is seeking a $1 billion debt package to refinance the former office tower. This is after Macklowe Properties secured a $750 million loan from Deutsche Bank in 2018 to fund the tower’s reconstruction. It was a project so gargantuan, in a city already known for gargantuan projects, that I had to see it for myself.

By some miracle of the R train, I’m early to my tour. Construction is still underway, not that you can tell. Not a single whirr of a buzzsaw or a clang of a hammer spills into the lobby, or rather the “Red Room,” as it is called. I could dedicate pages to the Red Room alone. Designed by muralist and Art Deco queen Hildreth Meière in 1931, 13,000 square feet of amber, oxblood, and gold mosaic tiles line the 33-foot-high walls in a sharp, dazzling web. The room’s glamor is enough to make a Fabergé egg blush.

I found out later that renovating the Red Room alone was a painstaking 16-month process of mending, re-grouting, and polishing each individual tile with nonchemical and non-abrasive techniques. You can imagine how relieved the restorationists were to find an unopened box containing thousands of original tiles in the building’s basement.

The Red Room is both a relic of a glittering bygone era in New York City real estate and a selling point for prospective buyers. Residents at One Wall Street will have bragging rights of living in a true New York City landmark, one that just won the Lucy G. Moses Preservation Award last April. “It’s the Oscars of landmark awards,” Richard Dubrow, Director of Marketing at Macklowe Properties, tells me as he walks in. Matthew Chook, Senior Vice President of Sales, runs in behind him.

Also there to lead the tour is Lilla Smith, Macklowe Properties’ Director of Architecture and Design, although her official title is “the star of the whole show” according to Dubrow. Smith’s been toiling away at the details of the conversion since Macklowe purchased One Wall Street for $585 million back in 2014. Alongside Macklowe himself, Smith is the mastermind behind the architectural gymnastics needed to make a conversion of this magnitude happen. Essentially, One Wall Street is a 1.1 million square feet of new construction, wrapped in the Art Deco shell of Ralph Walker’s original architecture.

Macklowe’s previous conversions had never gone so far as to completely gut the inside of the respective building. “Before we took existing elevators and existing infrastructure and kind of built apartments around it,” explains Dubrow. “Whereas here, we took the approach to basically take out every elevator, stair, wire, pipe, everything and start over from the inside so that we could optimize the building for residential use.”

So how is Macklowe’s vision for One Wall Street optimized for residential use? For starters, there are a lot of units, 566 condos to be exact, ranging from studios to three bedrooms. “The units start at just over a million, for a studio,” Chook says. In contrast, a 3-bed/3.5-bathroom is listed on One Wall Street’s website for almost $10,000,000. I ask how many units had sold so far, but Smith, Chook, and Dubrow were equally mum on the subject. Macklowe Properties isn’t releasing any numbers yet, but it was insinuated by my tour guides that buyers were already trickling in.

Then there’s the list of amenities that extend past the length of a CVS receipt. An attended lobby. A children’s playroom. A lounge for teens. A co-working space on par with a WeWork. A private health club. A spa. A ritzy bar. A fitness center. A private pool is located on the 38th floor (a rare feat for any developer). And, the gold standard for any New York City apartment, laundry in the building. Of course, that’s without diving into the 174,000 square feet of ground-floor retail space that’s also open to the public.

When I ask Smith what the biggest challenges posed by converting an office building were (besides buffing the Red Room’s mosaic tiles), she tells me point-blank: retail. “The challenge was opening up an ample retail space that could extend along Broadway and wrap around to New Street.” As of now, Whole Foods and Lifetime Fitness have signed leases at the site.

Smith, Dubrow, and Chook all guide me throughout the building. When I’m shown a two-bedroom condo, Smith regales me with geographical details about the Calacatta marble in the kitchenette. “It’s only available in one quarry in Italy,” she explains. She ushers me to the bathroom which is lined wall-to-wall with marble slabs, which she tells me that Macklowe picked out himself. “Yeah, Harry likes white.”

Dubrow escorts me to the condo’s balcony, and we’re greeted with the beauty of the Manhattan skyline. In every direction, there’s a historic landmark. The Empire State Building. The Statue of Liberty. Trinity Church. One World Trade Center. The New York Stock Exchange. Even the pharmacy covered in scaffolding on the corner looked iconic. It was all there. Suddenly the insistence to keep the Art Deco details of the original building’s design made perfect sense.

Art Deco’s aesthetic themes were entrenched in the collective optimism of the roaring ‘20s, and later, the eschewal of the austerity that came in the following decade. Sleek symmetrical designs that could only be achieved mechanically were an ode to new technologies and the dawning of a new age. Robert McGregor, one of the late founding members of the Art Deco Trust, had described the movement perfectly. “Art Deco reflects confidence, vigor, and optimism by using symbols of progress, speed, and power.” Standing on that balcony at One Wall Street, I felt the wistful glory of the past and the awaiting future collide.

Harry Macklowe had envisioned One Wall Street to be a mini-Rockefeller Center and an inflection point for Manhattan’s Financial District, or FiDi as it’s also known. Certainly, Macklowe didn’t foresee the onset of the coronavirus and the seismic economic consequences it wrought when he bought One Wall Street almost a decade ago. Nevertheless, One Wall Street seems to be opening up at an opportune time. “The pandemic really drove home the idea that a neighborhood that has mixed-use is going to be a healthier neighborhood,” said Smith, “and that’s what we set out to achieve.”

Office-to-residential conversions are largely written about as a new trend in the wake of pandemic-induced remote work, but Smith informs me that converting older, “less prime” office space into liveable units had started in downtown Manhattan years ago. Just before the tragedy of 9/11, 55 percent of office tenants in downtown Manhattan were in finance or insurance. As of September of last year, that number has dropped to 30 percent. Empty offices became residential buildings, but none as large-scale or complex as One Wall Street.

In its heyday, Manhattan’s Financial District buzzed with office workers and money, but over the last twenty years, the buzzing has dwindled. Now, after COVID-19 slammed the brakes on the financial markets, there’s a glut of empty office space in Manhattan. So does this mean that the redevelopment of One Wall Street was a very, very expensive mistake? Probably not.

We’re in the age of remote work now, and that grants a dynamic shift in power to mixed-use developments. One Wall Street combines residences, retail, and a snazzy co-working space that lends to the live-work-play ethos of post-pandemic life perfectly. Plus, it’s a great location for a mixed-use location. Walkability is a major determiner of the success of any mixed-use development, and you can’t get more pedestrian-friendly than NYC. One Wall Street is expected to remain under construction until the end of this year, so it’s too early to tell if the retail prowess and public amenities of Harry Macklowe’s pet project can really inject new life into the area, but there’s promise.