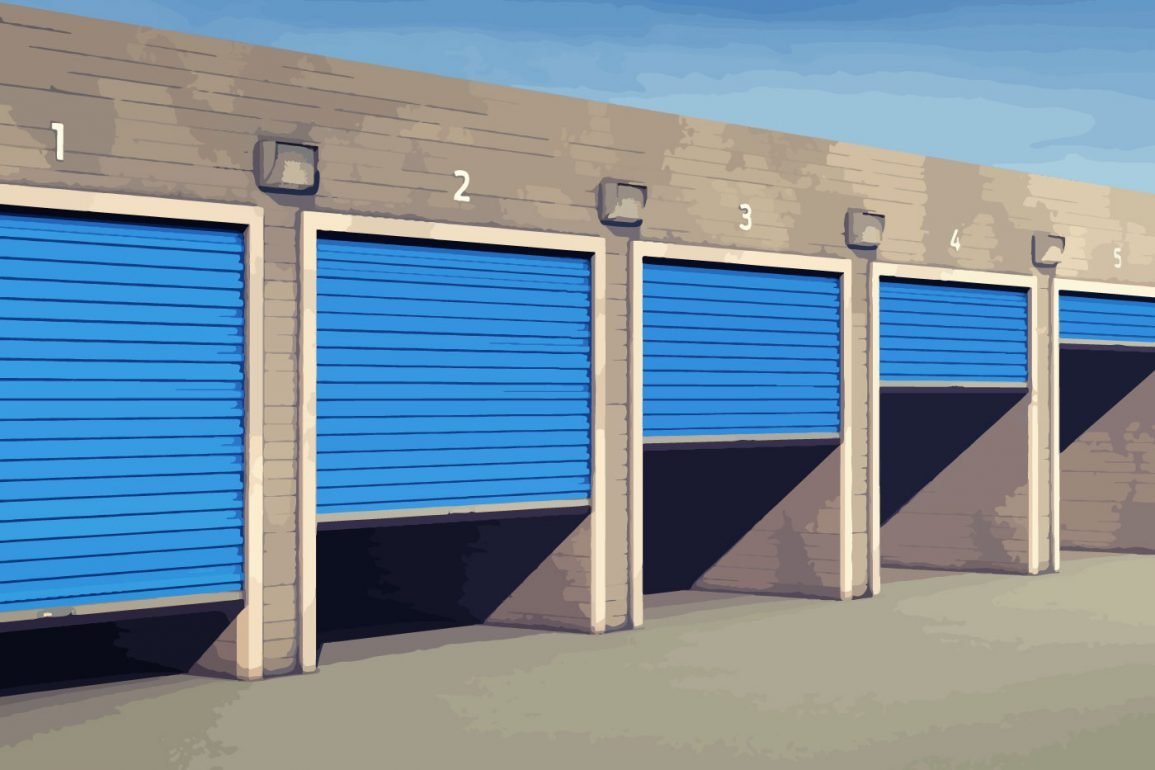 “In this world, nothing is certain except death and taxes.” We’ve all heard this quote, most often attributed to Ben Franklin. There’s a variation that’s proven just as true in the self-storage industry. It’s the ‘Four D’s’ that drive demand for self-storage that never seem to change: death, divorce, dislocation, and downsizing. The Self-Storage Association, a trade group, argues the mantra doesn’t need to be so ominous. Many people use self-storage due to a move (dislocation) and are downsizing into smaller homes, not just because of death and divorce. It could be argued that you could add another depressing ‘D’ for disaster, when homes are destroyed by floods, hurricanes, fires, and the like there is an uptick in demand for storage. The self-storage industry has been red hot recently, and that’s partly because the pandemic and upheaval of the past two years have boosted all these fundamental demand factors.

Self-storage has boomed over the past decade in America, but years of heavy development of new units were starting to oversaturate the market. Vacancy rates crept up in storage units until the pandemic’s perfect storm. Most self-storage property owners have seen staggering growth in the past 18 months. Storage real estate investment trusts (REITs) achieved a nearly 59 percent average return year in 2021, the highest among all REIT sectors, according to Nareit data. The remote working trend led to many people clearing out their homes to make space for offices or classrooms for their kids. The loss of jobs led some to move and downsize. And then there were businesses, like restaurants, that rented space to store inventory as in-person dining closed and social distancing guidelines went into effect. All these factors and more led to the national average four foot by teen foot climate-controlled storage unit rental rates to increase by 9.8 percent in October 2021 compared to the previous year.

The storage industry often sees a surge in demand during economic slowdowns and other chaotic times, so this shouldn’t be too surprising. But many observers note the gangbusters streak won’t last forever. Inventory for new storage units is still growing by 3 percent annually on a national level, according to Marcus & Millichap, and supply will eventually catch up with demand. In the meantime, many investors expect 2022 will be another lucrative year. The five big self-storage REITs expect to perform well, as they did in 2021. Public Storage, Extra Space Storage, Life Storage, National Storage Affiliates, and CubeSmart all increased revenues by at least 14 percent as of the third quarter of 2021. While the self-storage heavy-hitters are doing well, the industry remains highly fragmented, and the 2021 Self-Storage Almanac estimated that small, independent owners account for 52.3 percent of the market. More institutional investors are gobbling up properties as they see long-term dollar signs, though. For example, Blackstone acquired Simply Self Storage in late 2020, buying an eight million-square-foot portfolio for about $1.2 billion adding to the about 2.6 million square feet of self-storage facilities they already have under management.

The demand for storage space isn’t going anywhere, especially in America, where we love and are attached to our stuff. The United States now has 1.9 billion square feet of storage units in operation, and the Self-Storage Association says it’s now physically possible to fit every man, woman, and child in the country all under a canopy of the total self-storage roofing. The pandemic softened the trend of urbanization a bit, but more people moving to densely populated areas again and, whether it’s a kayak, grandma’s old plates, or extra furniture, they need space for their stuff.

This growing demand for storage space has caused innovation in the storage industry, creating more demand for new tech like climate-controlled units and self-service kiosks. Multifamily complexes are also trying to carve out more storage space, charging residents for units placed in parking lots or elsewhere. Like the ‘Four D’s’ adage reminds us, there will always be a demand for storage space. What that looks like in the future, though, remains up for debate.

A box for your boxes

Self-storage has always been attractive to investors and property owners for several reasons. Storage units are simple to construct and maintain and are less expensive. Traditional plumbing systems aren’t needed, and they require minimal infrastructure compared to other real estate assets. Lighting and a good security system are critical components, reducing risks on the property, and mechanical and fire protection systems vary depending on stored content. Self-storage generates an annual rent similar to multifamily rents ($7.5–$12 per square foot) but costs much less to operate, according to a real estate survey by Parham Group.

Self-storage is also a resilient sector that performs well in both economic booms and busts. During an upturn, homeowners move to bigger places and need a temporary unit to store their stuff. And in downturns, job losses and other factors lead to downsizing and peoples’ need to store extra stuff.“Self-storage properties have a very granular tenant base,” said Ben Vestal, President of Argus Self Storage Advisors. “An office building might have 25 to 50 tenants where self-storage will have 500 to 700 tenants. So, in self-storage, you’re never beholden to one tenant, and there aren’t as many costs associated with their occupancy. So, you can be very aggressive on rate increases.”

Vestal added that if a self-storage owner raised rents by $15 per month, tenants aren’t likely to put up much of a fight because overall rents range between $100 and $200. On an aggregated basis, self-storage owners can realize a 15 to 20 percent revenue increase based on minor rent adjustments.

A downside to owning self-storage is the transient nature of the tenant base. Continuous turnover requires active management to minimize vacancy rates. Traditional apartment landlords must comply with local tenant regulations, especially regarding evictions. Self-storage landlords don’t, and, in fact, they have a lien against all property stored in units in most cases. Storage landlords can sell, move, or dispose of tenant property if they break a lease obligation. But this doesn’t mean there still can’t be drama or stressful interactions. Many self-storage tenants are experiencing stressful life situations, such as evictions, divorces, or deaths in the family. An elevated level of tension in tenant interactions is expected.

Self-storage properties are generally less expensive to maintain, but more tenants are demanding new tech and amenities, such as climate-controlled units. Good HVAC systems minimize chances for mold and dryness that damage furnishings. Tenants also want frequent access, requiring units to be open seven days a week with nighttime hours. The extended hours, plus the value of items stored, means the need for adequate lighting, cameras, and other security features like smart locks. Many larger self-storage properties also make smartphone apps available that enable contact-free rental, access, and payment, which has been especially popular because of the pandemic. All these features, especially climate control, can increase rents for owners. With tech that allows for contact-free operations, it also means fewer employees on-site.

A few years ago, the Pew Research Center reported that more U.S. households are headed by renters than at any point since 1965. The total number of households in the U.S. increased by 7.6 million between 2006 and 2016, according to Pew, but over that same period, the number of homeowners remained flat. More Americans are renting than ever, and they have increasingly less space, too. The average size of a new apartment in 2018 in the U.S. was 941 square feet, which is 52 square feet less than it was in 2008, according to data from Yardi. This is one of the primary drivers of the demand for self-storage units. But it’s also a reason why some multifamily buildings are offering more self-storage options to tenants, as extra space is at a premium.

Some multifamily communities have been experimenting with garage units similar to gym lockers, according to Inside Self–Storage. These units are sometimes mounted on a garage wall with room to park a car underneath, or they stand alone in unused garages. Storage for bikes, especially in urban areas, is a common tenant request. And for most of these storage spaces, landlords charge a fee, adding a new revenue stream. They can also be a valuable marketing tool for landlords in dense areas where everyone needs more space. The storage space can be cheaper for tenants than renting a self-storage unit, and they’ve become a must-have amenity.

Still, self-storage advisors like Vestal don’t think adding extra storage space to single-family and multifamily rentals are much of a threat to the self-storage sector. “I think the cost of construction for single-family homes and apartments is much greater than self-storage that most developers won’t be able to economically increase their storage capacity,” Vestal said. “So, I don’t think it’ll affect the storage industry in any shape or fashion.”

Future demand for self-storage is solid and likely to keep growing, and not just in the United States. Increasing urban populations are creating smaller living spaces with renters who move around more frequently. For example, London’s population recently hit an all-time high of 9.3 million in 2020, and the population is expected to grow to over 10 million by 2030. During COVID-19 lockdowns, London’s easyStorage reported that inquiries surged by 25 percent, as people made room for home offices and decluttered spaces.

Baby Boomers are also downsizing, requiring more storage space. “People know how to use self-storage, they’re accustomed to it, and it’s just become kind of like cable television was in the late ‘80s and early ‘90s,” Vestal said. “Some people had cable TV back then, some people didn’t have it, but today almost everyone has cable TV or some subscription-based television service. Similarly, I think self-storage is becoming another line item on people’s budgets, and I think people are using it at a much higher frequency than they ever have.” The pandemic triggered a higher need for self-storage, especially in the sector’s biggest market of North America. But the Four D’s of death, divorce, dislocation, and downsizing are fundamental drivers that’ll continue to grow the industry.

In America, we love and are attached to our belongings, but so is the rest of the world, meaning it may be more basic to consumerism and capitalism. The Asia-Pacific region is the fastest-growing self-storage market, and activity is firmly established in dense regional hubs like Hong Kong, Singapore, and Tokyo. The global self-storage market was valued at just over $48 billion in 2020 and is expected to rise to $64.7 billion by 2026, according to Mordor Intelligence. Tenants are demanding new tech and amenities, but self-storage owners have plenty of room to increase rental rates to pay for investments. Self-storage is an attractive sector for property owners and investors alike, and while construction development could lead to saturation again, 2022 should be another banner year. Maybe we should modify the adage to be: “In this world, nothing is certain except death, taxes, and stuff.”