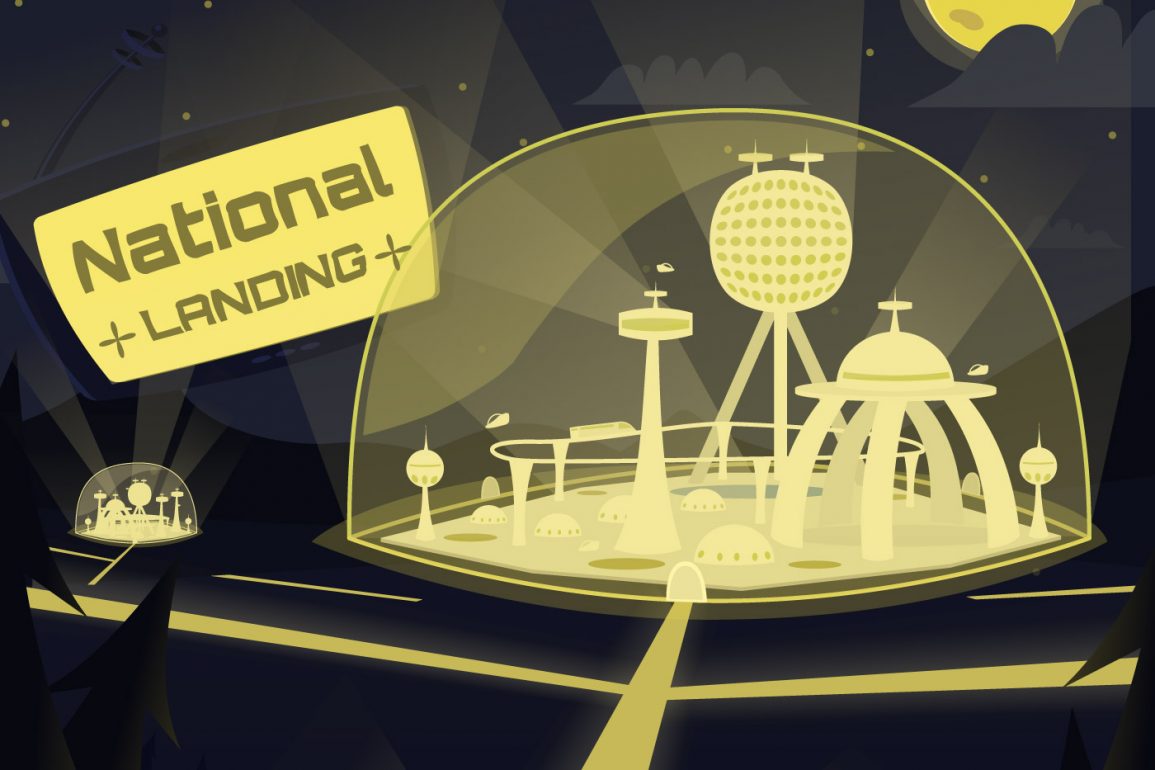 Amazon announced with great fanfare in 2018 that an area of Northern Virginia near Washington, D.C., would be the location of its much-sought-after second headquarters. The area would be known as ‘National Landing,’ prompting residents of Arlington County, Virginia, to ask, “What the heck is that?” The National Landing name was a new umbrella term and part of a rebranding campaign by Amazon, developer JBG Smith, and local economic development committees. National Landing was never a term used by locals, and some residents mocked the name, saying the place didn’t even exist. Other residents were simply confused.

Fast-forward to 2021, and now a massive amount of capital is flowing into National Landing, an area that comprises Crystal City, Arlington, Potomac Yard, and Pentagon City in Northern Virginia. JBG Smith, AT&T, Amazon, and an array of other city and state organizations plan to build what they call the most connected city in the United States around the fabled Amazon HQ2. The tech giant says it’ll bring 25,000 jobs to the area, along with a crapload of redevelopment projects.

And, oh, did we mention the development will be a smart city? Over the summer, AT&T and JBG Smith unveiled plans to make National Landing the nation’s first 5G smart city. The 5G network infrastructure will be built alongside the development of the area, which is already under construction and will allow residents to connect to devices anywhere within the area.

The press releases from Amazon, AT&T, and others describe a utopian-like tech dream with self-driving vehicles, virtual and augmented reality, and a 5G network connected via building side mounts and underground infrastructure. Mo Katibeh, head of AT&T’s Network Infrastructure Build, said in a statement that, together with JBG Smith, they “intend to build a true smart city from the ground up.” If they succeed, the developers say National Landing could be a global destination for tech innovators and entrepreneurs. In addition to Amazon’s HQ2, JBG Smith is developing a $1 billion Innovation Campus for Virginia Tech, geared toward creating a pipeline of tech industry talent.

But not everyone is sold on National Landing. Paul Doherty is CEO and President of The Digit Group, an architecture and planning firm that designs smart cities, and he told us he sees a lot of ‘tech solutionism’ in the National Landing plans. In an email, Doherty said it looks like National Landing has been planned more by marketers than with people who understand real estate or smart cities and their effect on residents.

“This shouldn’t be about an ego-driven way of having people that think they’re urban designers sticking a destination building like HQ2 for Amazon and building around it and saying, ‘Build it and they will come,’” Doherty said. “There’s no outreach to the weakest links of that particular community. What are they doing for the single mom that has five kids that lives only five blocks away? Is this meant to be a place where you stick a fence or make it a gated community that’s only meant for rich people that are Amazon employees?”

But another concern that looms over smart cities of any type nowadays is the public’s fears of privacy intrusion and surveillance. If National Landing wants to succeed, engaging with the community that already lives there will be crucial, Doherty noted. Continued consultations with the people who live in the newly dubbed National Landing area and consistent transparency will be the key in order for this smart city project to be considered a success.

Who’s laboratory is it?

When Amazon announced its plans to launch a second HQ in 2017, many U.S. cities drooled at the thought of having the tech giant choose them. The Washington, D.C., area won the Amazon sweepstakes in late 2018, and as we mentioned, the area that would house Amazon came with the new name of ‘National Landing.’ (Amazon also chose Queens as a second winner, but the plans were canceled after intense backlash over nearly $3 billion in government incentives for building in New York).

Crystal City, an urban neighborhood in Arlington County, Virginia, will be part of the National Landing area. Its former claim to fame was being home to numerous federal agencies and being located right next to the Reagon National Airport and the Pentagon. A Bloomberg report said the Crystal City Business Improvement District is head-over-heels about the idea of the Amazon HQ2 and AT&T smart city development, helping the region boost its reputation as a tech corridor and move away from dependence on federal government jobs. A study by Chumura Economics & Analytics said Amazon will inject $14.2 billion into the Virginia economy over the next 12 years.

But being home to Amazon and a potential smart city can come with drawbacks, too. Big Tech companies, such as IBM and Cisco, have been in the business of funding and engineering smart city projects for a while now. But recently, companies like Google and Amazon are expanding into the smart city market, and some critics say it’s purely a money-making opportunity. Amazon has other smart city projects in the works, called Sidewalks, that use Amazon home devices running on BlueTooth Low Energy to extend internet connectivity and create ‘smart neighborhoods.’ AWS, Amazon’s cloud-computing firm, is also working with the city of Chicago on a project called OpenGrid that enables residents and businesses to better interact with publicly-available data.

All this use of new tech for smart cities seems great. But the problem of having Big Tech companies like Google and Amazon involved in smart cities is the cities can become more so living laboratories for the companies themselves (and also for collecting data), instead of places seeking to solve specific urban problems for the people who live there. While urban planners and tech nerds may dream of smart cities, regular citizens and groups like the ACLU and Amnesty International warn about the risks of government surveillance and privacy concerns.

In a 2019 report, Amnesty International said the “introduction of fully integrated, data-centered technologies in city infrastructures and management presents serious threats to human rights.” The report said some smart city projects can mainly serve the interests of ‘surveillance capitalism,’ basically meaning it’s a way for private companies to amass large amounts of data and then use it to influence human behavior and drive profit through advertising. Groups like Amnesty and ACLU are increasingly challenging surveillance capitalism, a method whereby the commodity is peoples’ personal data that’s then used for commercial purposes. As awareness of the practice has grown, public distrust of the ‘free’ services provided by tech giants like Facebook and Google has grown.

Alphabet’s Sidewalk Labs project in Toronto is an example of a Big Tech-led smart city initiative where privacy concerns were raised. The project was first proposed in 2017 and hyped up by Canadian Prime Minister Justin Trudeau and former Google CEO Eric Schmidt, much like how Amazon’s National Landing is being championed today. The Sidewalk Lab’s Quayside project was envisioned as a 12-acre neighborhood (later expanded to 190 acres) and projected to cost billions of dollars. However, Toronto’s Sidewalk Labs project unraveled mostly because of residents’ fears and anger about data privacy. Sidewalk Labs engaged in extensive public consultation and created a proposal for the project’s development, but never entered the development phase.

The Sidewalk Labs Toronto project finally collapsed in May 2020, as Alphabet and developers cited the pandemic and economic uncertainty as to the reason. But data privacy and concerns over data governance are deemed by some people as the main reasons why the project was shelved and residents created a #BlockSidewalk campaign. Alphabet recognized active public discourse around data governance for the project, and they eventually reached threshold alignment on the issue with their partner Waterfront Toronto in the fall of 2019. Sidewalk Labs remains an active company with other successful spinouts, in-house products, and advisory projects across the U.S. While the National Landing smart city is an entirely different project with different developers, the shadow of mighty Amazon’s involvement could always lead to pushback during the development, much like Alphabet’s Sidewalk Labs in Toronto faced backlash.

No one wants ‘Big Brother’

Civic engagement and community involvement are critical to success in smart cities. Alphabet and Sidewalk Labs did a lot to adhere to processes of transparency and communicate with the affected Toronto community. But public distrust of institutions and especially big corporations like Google and Amazon is high right now. Smart city projects, especially ones as ambitious as National Landing, can do a lot to ease potential tensions with residents by demonstrating the benefits of the tech they’ll be using and also being open and transparent about hot-button issues like data collection and surveillance. Resistance from the public about a potential ‘Big Brother’ situation should, in all likelihood, be expected.

There’s much evidence that Amazon and the National Landing developers are collaborating with residents already. Amazon recently announced it’s making changes to its HQ2 design based on input from county officials and community members. The company is adding more green space, widening sidewalks, and enhancing bike safety around the HQ2 development. The project is still in the early stages, so details about cameras, sensors, and data collection haven’t made headlines yet. But if they do, it’s not a stretch to imagine National Landing residents asking what the purpose of collecting the data is and if companies like AT&T and Amazon can be trusted with it.

“I appreciate that Amazon listened to their HQ2 neighbors and decided to create more green space and better access for bikes and pedestrians,” said Cindy McLaughlin, Head of Product at CarbonBuilt, who also co-chairs the Tech and Innovation Council at ULI. “I hope they now extend the concept outside their backyard and push cities to create better bike and pedestrian infrastructure for the rest of us. They’re uniquely positioned to do this and benefit from it since their e-cargo-bike delivery program is best in class.”

Residents were confused when Amazon re-branded their area as ‘National Landing.’ And some Northern Virginia residents are hyped that the big tech company is developing the area and turning it into a hub of tech innovation, bringing loads of money and jobs with it. But Amazon, AT&T, and the other parties involved would be wise to study examples of smart city cases that went awry like Toronto’s Sidewalk Labs. Amazon’s 5G smart city plan may be new, but it could bring up all the same old problems about digital privacy and surveillance. All the connectivity and amazing uses of technology in National Landing won’t matter much if residents there find it intrusive.