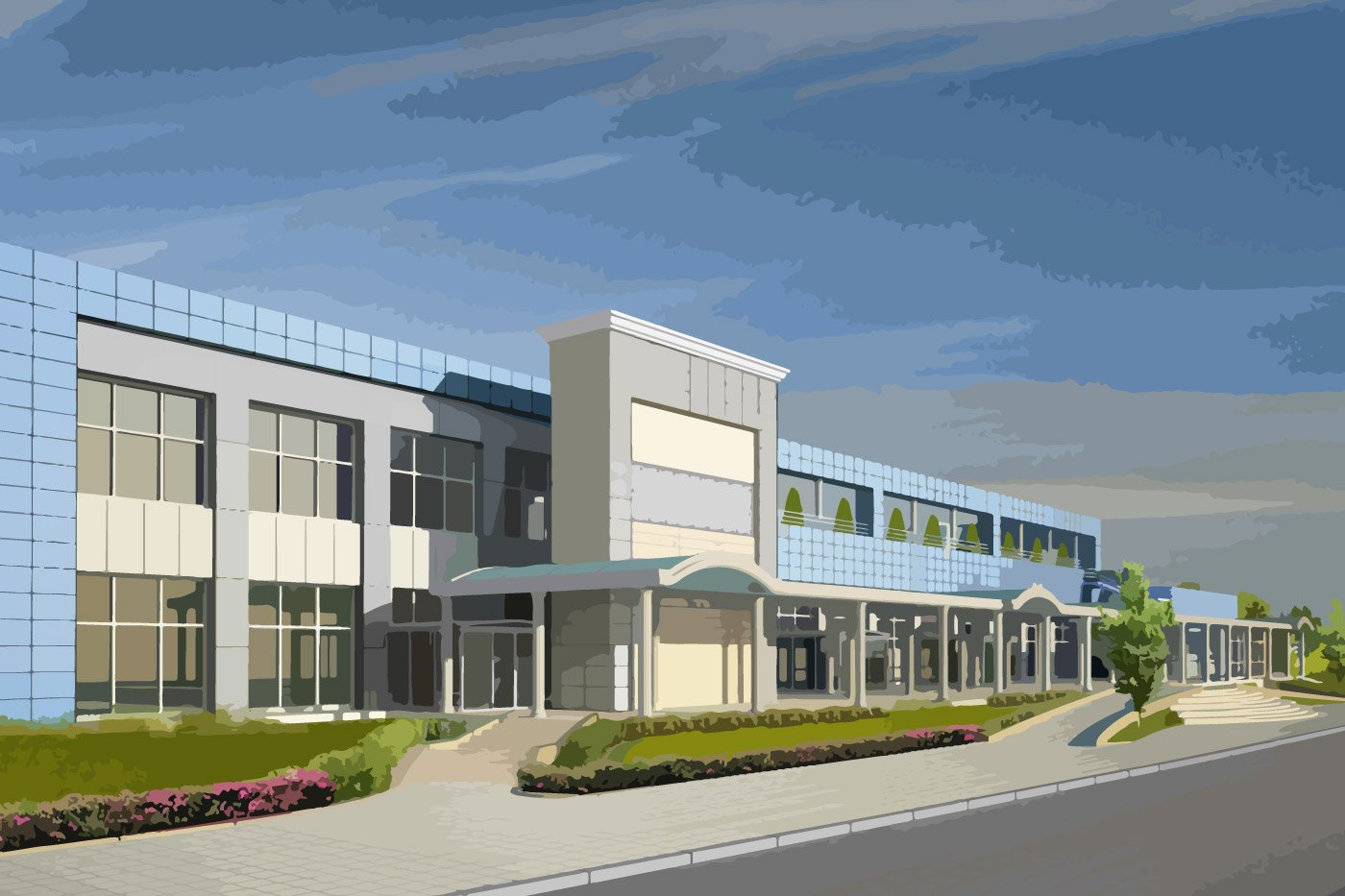 Suburban offices are livelier than they used to be, albeit not all of them. I worked in an office park located in the suburbs of Philadelphia for almost seven years in the 2010s, and at times, it was a soul-crushing experience. The office was part of a corporate center in an area of the suburbs where many companies had clustered together. Some of the offices might have been nice, but mine suffered from severe underfunding. We had a dingy breakroom with a vending machine with only a few Snickers bars and cheese crackers. An ancient coffee maker trickled out a stale, bitter brew. My co-workers at I worked under the unforgiving glare of fluorescent lights in small, gray cubicles for exactly 37.5 hours per week. I say “exactly” because we watched the clock very closely.

There were some perks like the fitness room, which was painted gray, and the size of a small bedroom with some mismatched free weights (the carpet, also gray, seemed specially designed to hide stains). We’d go for walks around the building, often watching our backs for aggressive drivers. There were some great lunch spots nearby, our sole joy of working there, but getting anywhere required driving.

Parking was plentiful, which was great, but the commute was horrendous. It typically took me at least an hour to get there and sometimes longer to drive home. I’d be stuck in traffic, sometimes bumper to bumper, on the last leg of my daily journey home. I was exhausted by the time I returned, sometimes falling asleep right after dinner. And then I’d wake back up the next day and do it all over again. At the time, I thought that it was just the way work got done. Now, I would never accept that sort of arrangement.

Are the suburbs cool again?

The latest suburban offices look much different from those of my time. The pandemic caused an inflow of people, many of whom were workers leaving city centers because they were now able (or forced) to work remotely into the suburbs. Even before the pandemic, suburban offices were getting makeovers, but newfound demand for suburban office space may have accelerated the trend.

While some of the growth of the suburbs can be attributed to the pandemic, the trend of suburbanization has been happening for some time now. Population growth in the suburbs and smaller metro areas grew by 16 percent between 2000 and 2018, outpacing urban growth (13 percent), according to the Pew Research Center. Pew also reports that, since the pandemic, the number of people expressing the desire to live in cities declined by about 25 percent. But contrary to the dominant media narrative, fewer Americans moved during 2020 than in other years. Moving from one residence to another during 2020 was at the lowest rate since the government began tracking the data 70 years ago, according to Pew. About 4.9 million Americans left the city for the suburbs or rural areas, compared to an annual pre-pandemic average of 5.4 million.

Part of the reason for the long-term suburban shift may be that the housing costs in big cities, both for renters and buyers, had priced many out. In Boston, for example, the average one-bedroom apartment rent was approximately $2,000 in early 2021, among the highest in the nation despite recent decreases, according to Zumper, a rental listing site. No matter their age, office employees are beginning to find walkable suburban communities more attractive, as they’re still within a short commute from the city and can save money. Corporate occupiers and landlords are tracking this shift to the suburbs, locating a portion of their occupancy in suburban areas.

Since the pandemic, the migration patterns of people have been well documented, but it’s important to note the situation is still very dynamic. The impact on real estate continues to fluctuate as well. For example, the suburban office market has performed better than urban since the start of the pandemic, but the tide could be turning. “On average, vacancies for downtown offices have been higher than suburban lately, but there are a few caveats,” said David Smith, Americas Head of Occupier Research at Cushman & Wakefield. Smith explained that there’s more product being built in urban areas, leading to occupiers upgrading to new spaces and driving up vacancy rates. He said about half of all office space in the U.S. now under construction is for central business districts.

Smith thinks that it is too early to tell if the migration patterns of the past few years have affected office leasing strategies. “Office is different than multifamily in that leases are much longer, and more long-term planning is required,” he said. “I believe central business districts are still the most desirable locations for offices, and the amenities in urban areas will drive the most demand.”

The downtown core may still be the main attraction for corporate occupiers, but the shift to the suburbs has been prevalent enough to catch investors’ attention. Plus, landlords are learning that suburban offices need to be socially activated in order to compete with urban offices. Suburban offices come with many advantages for occupiers, the first being the cost. The average office sales price per square foot was $238 in the suburbs in May 2020, about half the price of $500 for central business district offices, according to Real Capital Analytics.

Offices in downtown cores are often more exciting to occupiers and employees because they’re more walkable and feature a variety of stores, restaurants, food trucks, and other amenities nearby. As my office experience example showed, the suburban office can be much less convenient and car-centric, and require more workarounds to make them great places to work. Activating suburban offices becomes essential for occupiers and landlords, especially in the hybrid era where luring employees away from remote work is the goal.

Social activation is a term used in social media, too, meaning transforming followers from voyeurs to participants into ‘super-fans.’ In the office context, social activation means providing amenities and making design choices that create a more vibrant and collaborative environment. Younger employees have higher standards today of workspaces, and the legacy of remote work means people have gotten used to a greater degree of autonomy and flexibility. But remote work may pose a risk of some employees feeling starved for social interaction, which is where activated spaces have a huge advantage over more traditional office layouts. A recent report by PwC noted that while younger employees are fully digital, but want comfortable and creative environments. They feel drawn to organizations that “offer an engaging, comfortable, and stimulating atmosphere that creatively blends work and life.”

CEOs frequently say the biggest thing lost during the rise of remote work was a fraying of social bonds and a weakening of culture. So, occupiers are looking for community-oriented spaces, clearing out some private areas, and imitating the feel of more of a living room or boutique hotel lobby.

Inside a building, there are endless possibilities for amenities that spark social interactions and give employees of all ages more stimulation. Reimaging common areas like lounges are one example. Tenant lounges with strong WI-Fi connections are being used as landlords knock down cubicle walls and bring employees together for team meetings or casual conversation. CEOs frequently say the biggest thing lost during the rise of remote work was a fraying of social bonds and a weakening of culture. So, occupiers are looking for community-oriented spaces, clearing out some private areas, and imitating the feel of more of a living room or boutique hotel lobby. The reconfiguring of spaces also seeks to break down the old hierarchical design. A shared and open desk setup is being chosen by some occupiers, giving employees personal storage lockers and private booths for phone calls.

Many employees say they want to return to the office at least part-time to interact with co-workers, so these collaborative and open spaces are vital. Some of the amenities in buildings used to be rare outside of areas like Silicon Valley, but tenants across the nation are coming to expect them. Traditional amenities like fitness facilities and cafeterias are one thing. Communal amenities like yoga and meditation rooms, onsite bike repair, climbing walls, and table games have tenant demand. These amenities are essential in suburban offices if the facility is a car ride away from restaurants, retail, and beloved yoga studios.

Activating suburban spaces also involves providing classes and programming that draw workers to the office, according to Gabrielle McMillan, founder of Equiem, a tenant experience software provider. “We’ve seen many of the suburban properties we are deployed at spending a lot of time activating the space with things like food trucks and exercise classes,” McMillan said. “It makes sense when you think about how many of these campuses are far removed from these types of services.” Eighty-seven percent of office landlords said they’re offering classes and other events, including everything from the more happy hours to concerts to art installations in lobbies, according to a report by the NAIOP Research Foundation.

Taking advantage of outdoor space is another way suburban offices can differentiate themselves from urban peers. True, urban offices may have large parks nearby or green roofs and gardens, but in the suburbs, more space means providing this amenity on a larger scale. Many sizeable suburban office parks have abundant but sometimes underused outdoor space that can be made more accessible for employees. One large project took place in Orange County, California. A developer said they built a two-acre courtyard adjacent to an outdoor amphitheater and covered seating for an on-site restaurant.

Activation of office spaces in both urban and suburban markets is a relatively new phenomenon, and it remains to be seen if it’ll continue. For now, there’s a flight to quality in the office market in all locations, and Class A and newer buildings are seeing more leasing activity, according to Smith at Cushman & Wakefield. For the most part, though, only suburban offices in the top tiers of rent will see the most significant changes and amenities. That’s because space-activating for some buildings may not be cost-effective for everyone.

The costs for these amenities often pass onto the tenant in the form of higher rents or common area maintenance costs. Some occupiers will pay a premium for amenity-rich spaces, especially tech companies with younger employees who are more difficult to keep. However, not all occupiers are willing to pay above-market prices for a fully redesigned workspace. Still, many landlords seem to agree the amenities arms race isn’t going away anytime soon, and it’s especially important in the suburbs.

As the hybrid and collaborative workspace have taken over as the new norm, offices will have to evolve. My experience at an underfunded, unactivated suburban office taught me that our workspaces greatly affect our mental health. As employers try to get workers back in the office, spaces will need to be as attractive as possible. Suburban locales have been attracting more residents lately, and the offices there have some critical advantages over urban ones. If the occupiers and landlords can find ways to make these suburban offices great places to work, we might see them become a vibrant magnet for the workforce.