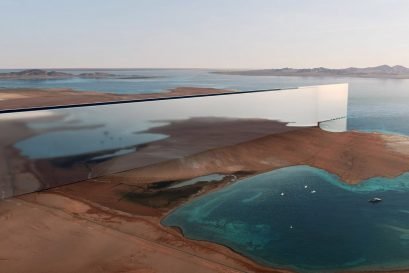 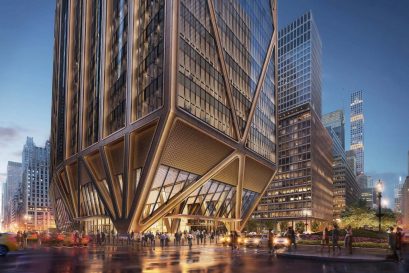 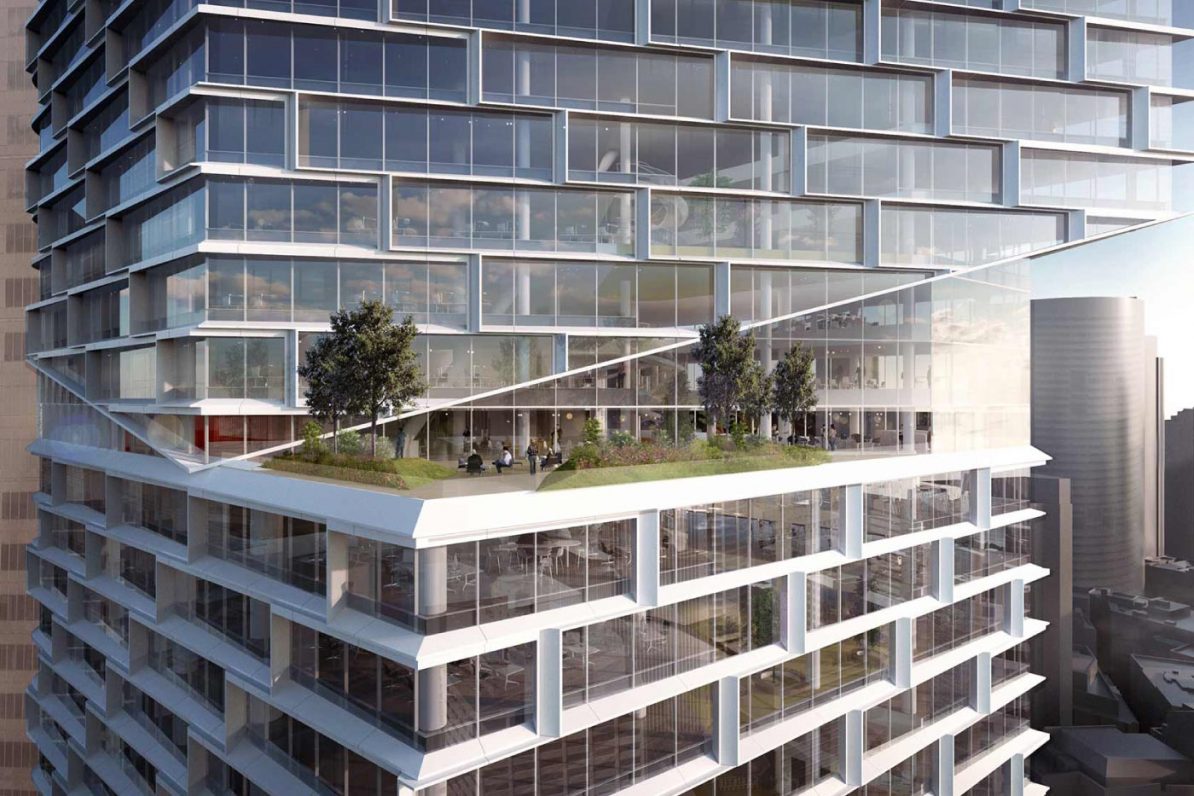 You have already seen a picture of the AMP Center in Sydney, Australia, you just don’t know it. It stands halfway between the famed Sydney Opera House and Harbour Bridge. Built in 1976 the mainstay of the Sydney skyline was scheduled to reach the end of its useful life around 2013. The owner, AMP Capital, wanted a new tower, something more energy-efficient and glamorous to meet the needs of 21st-century tenants. But the team at AMP was also concerned about the environmental impact of demolishing the tower and building a new one.

The impact of building construction on global carbon emissions is something on the minds of many in the real estate and development industries today. It has created a paradox for real estate’s quest to decarbonize. The industry needs to reduce greenhouse gas emissions urgently, and as we’ve recently reported, it’s not on track to do so by 2050. Part of the reason the real estate sector isn’t on pace to meet our climate goals is because, globally, we’re building more than ever before. And as the affordable housing shortage throughout much of the developed world shows, we need these new buildings. Every year, new construction on a global scale is equivalent to creating the entirety of Japan’s current floor area.

The carbon emissions generated from demolishing old structures and all the embodied carbon that goes with it, including the production of new materials like steel and concrete, is a pesky decarbonization challenge. In Australia, the construction industry accounts for 18.1 percent of the national carbon footprint. Many real estate developers and tenants want efficient new buildings, but it comes with a cost in carbon.

When the time came to find an architectural firm for designing the new skyscraper, they held a competition and sent out an unprecedented brief: they challenged architects to build a new tower without demolishing the existing one. If completed, this would be the first time it was ever done.

Upcycle for the win

A Danish architectural firm, 3XN, won the competition in 2014, and the resulting skyscraper, now known as the Quay Quarter Tower, was opened in early 2022. 3XN’s design used an innovative “upcycling” method of construction that enabled more than two-thirds of the existing structure to be retained, saving an estimated 12,000 tons of embodied carbon. That’s the equivalent of powering the entire tower for three years or as much carbon dioxide produced from 35,000 flights between Sydney and Melbourne. After contractors removed the unsalvageable parts of the old tower, they built a new structure beside it that they grafted onto what remained. A glass façade was wrapped around both structures to blend them and create a single skyscraper. The new layout doubled the available floor space and the number of people it can accommodate from 4,500 to 9,000.

3XN completed the project in tandem with engineering firm Arup and Australian architectural company BVN, and it came with various challenges. One was determining if the existing building, completed in the 1970s, even matched its original design. In fact, the actual structure of the AMP Center building was at a slightly different level than it was in the drawings. High-rise structures typically shrink under their own weight, especially following the first few months after completion because concrete spreads as it fully dries. The architects and engineers could only get a chance to more closely examine the old tower when construction started in 2018. They took concrete samples to calculate how much and where additional structural load could be supported.

Another challenge caused by the shrinking of the old tower was whether the old and new structures would be misaligned. The solution for this was installing hundreds of sensors around the building to track even the most minuscule movements. The data collected was fed into a digital twin 3D model of the tower that was used to track adjustments and ensure everything worked with the actual measurements of the building. The contractors also left a gap of about 13 feet between the new and old structures until the final stages of construction, which gave the concrete time to settle before the final graft was done.

There are no apparent remnants of the old structure when viewing the new Quay Quarter Tower from the outside. On the inside, too, the skyscraper’s two parts have been blended seamlessly. The architects said the blending was crucial to the design so that when you’re inside, you’re not thinking about where the old and new structures are. The design features five stacked volumes that twist toward the sky, described as a “vertical village.”

The new skyscraper contains offices, retail space, and a series of rooftop terraces. AMP is the anchor tenant for the building, but several companies, including Deloitte, have signed on to lease space. The building is expected to be fully occupied by mid-2023. Salvaging the old structure rather than building from scratch came with other vital benefits. AMP Capital, the building owner, saved an estimated 150 Australian dollars (US $102 million), and it cut down the construction time by a full year.

Plenty of buildings and high-rises have had deep retrofits in the past, but an entire upcycling of a skyscraper like this is a world first. The engineering firm Arup, who consulted on the project, has described it as an adaptive reuse. They say it’s part of the construction and development industry’s drive for circular economy architecture. About 68 percent of the old tower’s core remained intact, keeping an enormous amount of building waste out of landfills and, of course, the embodied carbon savings.

The reason an adaptive reuse project of this scale hasn’t been done before is possibly because previously no one was up for such an ambitious challenge. But recent advancements in tech like building information modeling (BIM) and digital twins gave the architects and engineers for the Quay Quarter Tower confidence to pursue such a large adaptive reuse project. Designers, engineers, and contractors have collaboration and visualization tools that a deep retrofit like this economically viable.

Another essential benefit of using BIM technology is clash detection, which identifies potential conflicts in building projects, structural or mechanical, before they become expensive issues. Research shows that in projects where BIM is used, it increases the speed of completion by at least 5 percent and contributes to an estimated 25 percent improvement in labor productivity. BIM has been around in some shape or form since the 1970s, but it’s only within the past few years that it has become more widely used in the architecture, development, and building design fields. A 2020 survey by the Associated General Contractors of America revealed that 18 percent of respondents expected the number of projects that use BIM would increase that year, with 25 percent of professionals saying they use it primarily for clash detection.

The architects and engineers of the upcycled Quay Quarter Tower hope the project can serve as a case study for other developers worldwide. Kim Herforth Nielsen, the founder of the Danish architecture firm 3XN that worked on the project, recently said, “I think many developers didn’t look at it as an option,” referring to the ambitious adaptive reuse of the building. Nielsen added that the project shows how sustainability and value can come together economically.

These types of upcycling and adaptive reuse projects may have to become more common if the real estate industry is to meet the ambitious decarbonization goals being set for it. Worldwide, 944 office properties more than 328 feet in height were built between 1953 and 1983. With all these office towers now 40 to 70 years old, some may have been retrofitted, but many others are nearing the end of their life cycles. If these buildings are demolished it would represent millions of tons of embodied carbon and piles upon piles of building materials potentially scrapped in landfills. As Carl Elefante, the former president of the American Institute of Architects, once said, “The greenest building is the one that already exists.”The Quay Quarter Tower, the world’s first upcycled skyscraper, offers a new way forward. With technology like building information modeling and digital twins and a little engineering and architectural ingenuity, more buildings may be able to avoid the previously inevitable cycle of build, using, demolishing, and rebuilding. Most everyone in the real estate, construction, and development industries wants new, shiny buildings to meet the needs of 21st-century tenants. A new project in Australia may have found a way to satisfy those needs without harming the planet in the process.