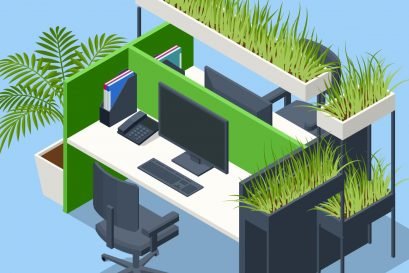 The catastrophic economic impacts of recurring COVID-19 lockdowns left retail stores in the lurch, which in turn put their landlords in a tight bind. While office landlords offered rent concessions and delayed lease commencement dates for their tenants, retail landlords tried to find ways to adapt their leasing structure to reflect market conditions as well. One popular solution was to adjust a tenant’s lease term from a fixed-rent to a turnover rent, at least until markets clawed their way back from COVID slumps.

A turnover rent, also known as a percentage lease, is about as straightforward as it sounds. The tenant agrees to pay a base rent, running expenses, and a monthly variable cost based on the monthly revenue generated from the tenant’s business. The practice is more widely accepted in Europe, but in the U.S., accepting too many of these leases could’ve spelled bad news for commercial landlords. But now that so many businesses negotiated a percentage lease in order to survive the lack of sales from pandemic lockdowns, percentage leases may be the post-pandemic norm.

The rent of the world as we know it

Percentage leases are unique to each business, but they typically follow the same structure. A retailer rents storage space. The store signs a lease for the space with a base rent of a few dollars per square foot, plus a 1 percent rent that’s based on a breakpoint in sales. That breakpoint is calculated by the annual rent (the square footage multiplied by the dollar amount per square foot) divided by the percentage rent of 1 percent.

Before COVID, most tenants of a shopping center or an outlet mall would be on a fixed-rate lease. “The minority of tenants would have percentage leases,” said Lisa Wagner, Principal in the Outlet Resource Group, because fixed-rate leases are ironclad and consistent. In a percentage lease, rent revenue can fluctuate when a retailer has a bumpy financial month. “It was generally scary for landlords to accept many [percentage leases] because investors would’ve found the risk to be intolerable,” added Wagner. Because of the risk associated with the variability, Wagner told me that percentage leasing was previously limited to the retailers who had the largest and smallest real estate footprints in a shopping center: big-name department store anchor tenants and smaller, transient tenants with higher margins like mall carts and kiosks.

The irony behind the risk aversion to these types of leases, according to Wagner, is that when tenants on percentage leases are doing well, they’re usually the highest performers of a landlord’s portfolio. Yes, a low-sales month would equal a lesser rent payment, but when a tenant experiences a higher rate of sales, rents rise in tandem.

Percentage leases aren’t without their own set of issues. Tracking sales to arbitrate rent each month can be a difficult task. Unless renters are seeking rent relief from their landlord, they’re typically hesitant to disclose their sales data. In a fixed lease, landlords are passive players in a tenant’s business. A percentage lease transforms that relationship, blurring the line between landlord and partner. Plus, landlords and their lenders must conduct more due diligence on the enterprises of their tenants, as well as ensure that the business continues to satisfy expectations during the loan’s term.

Almost all percentage leases are unique and require a collaborative effort between the tenant and landlord because percentage leases require landlords to take metrics that they’re not quite used to into account. Day-to-day retail occurrences like returns, employee discounts, and gift vouchers are variables that can easily throw off the metrics for the percentage lease. What defines “turnover” is the most critical element for a lender to comprehend in a lease. Lenders may consider imposing additional financial covenants, in addition to the standard loan-to-value and debt-yield covenants, that include both the borrower’s and tenant’s financial circumstances.

Before the pandemic, long-term fixed retail leases were seen as low risk. For landlords, they provided steady and consistent rent revenue, regardless of the tenant’s volume of sales. Of course, fixed rents do not totally eliminate tenant business risk, but in light of the pandemic shoving the world economy into a series of stumbles, fixed rents went from a low-risk agreement for the landlord to high stakes as most retailers lost revenue and couldn’t make their rent payments. Landlords had to confront the increasing reality of hemorrhaging an empty property since lockdowns decimated the retail sector. Prospects of tenants who could replace an outgoing one dwindled, so retaining a struggling tenant was often in the best interest of the landlord. The pandemic was so full of uncertainties that allowing more retailers than usual an option to operate on a percentage lease felt like a temporary solution that wouldn’t be necessary for the long-term. But the virus didn’t magically disappear in a matter of months, much to everyone’s dismay.

Landlords offering a percentage lease to retailers in their shopping center was initially a temporary band-aid in order to keep a space occupied, but this move ultimately demonstrated to companies that a flexible arrangement was more desirable compared to a long-term fixed lease. David Abramson, founder and managing director of Cedar Dean Group, a commercial property advisory firm located in London, told The New York Times last year that the relationship between landlords and tenants “has definitely become more fraught because of the pandemic,” but that landlords were undergoing “a complete change in attitude” in embracing percentage leases.

Forty percent of retail landlords surveyed by Colliers in May of 2020 said they would be more likely to factor a tenant’s sales into their lease agreements, which seemed surprising when you consider the complexities of carrying out a percentage lease. Then again, the beginning of the pandemic was fraught with uncertainties and unprecedented decision-making, but the ongoing demand for percentage leases may persist thanks to the current state of the market.

However, many retailers may regret their eagerness to renew their lease in a percentage agreement in an inflationary environment. Retail is finally active, with sales predicted to climb between 6 percent and 8 percent in 2022, according to the National Retail Federation. Higher consumer prices mean that retailer tenants on a percentage lease could outpace their percentage breakpoint more easily, and have to part with more of their revenue than expected. This year’s prediction shows a slower rate of growth for retailers than in 2021, but it’s still higher than the pre-pandemic rate. This means that the landlords who obliged a percentage lease are finally reaping the high rewards that they crossed their fingers for back in 2020.

In a volatile market economy with a persistent pandemic in the background, there may be no leasing solution between a landlord and a commercial tenant that’s truly a win-win. Still, the COVID-19 virus demonstrated that fixed-rate leases did not sidestep financial risks, as well as investors and landlords, had once assumed. But while landlords have slowly come around to allowing more of their tenants to sign a percentage lease, their hesitancy for having too many in their portfolio could very well return. As consumer prices continue to creep up, landlords can expect more tenants to try to negotiate higher rates for their breakpoints, so while percentage leasing is more collaborative than the traditional lease model, negotiations on either side won’t likely be getting easier any time soon.