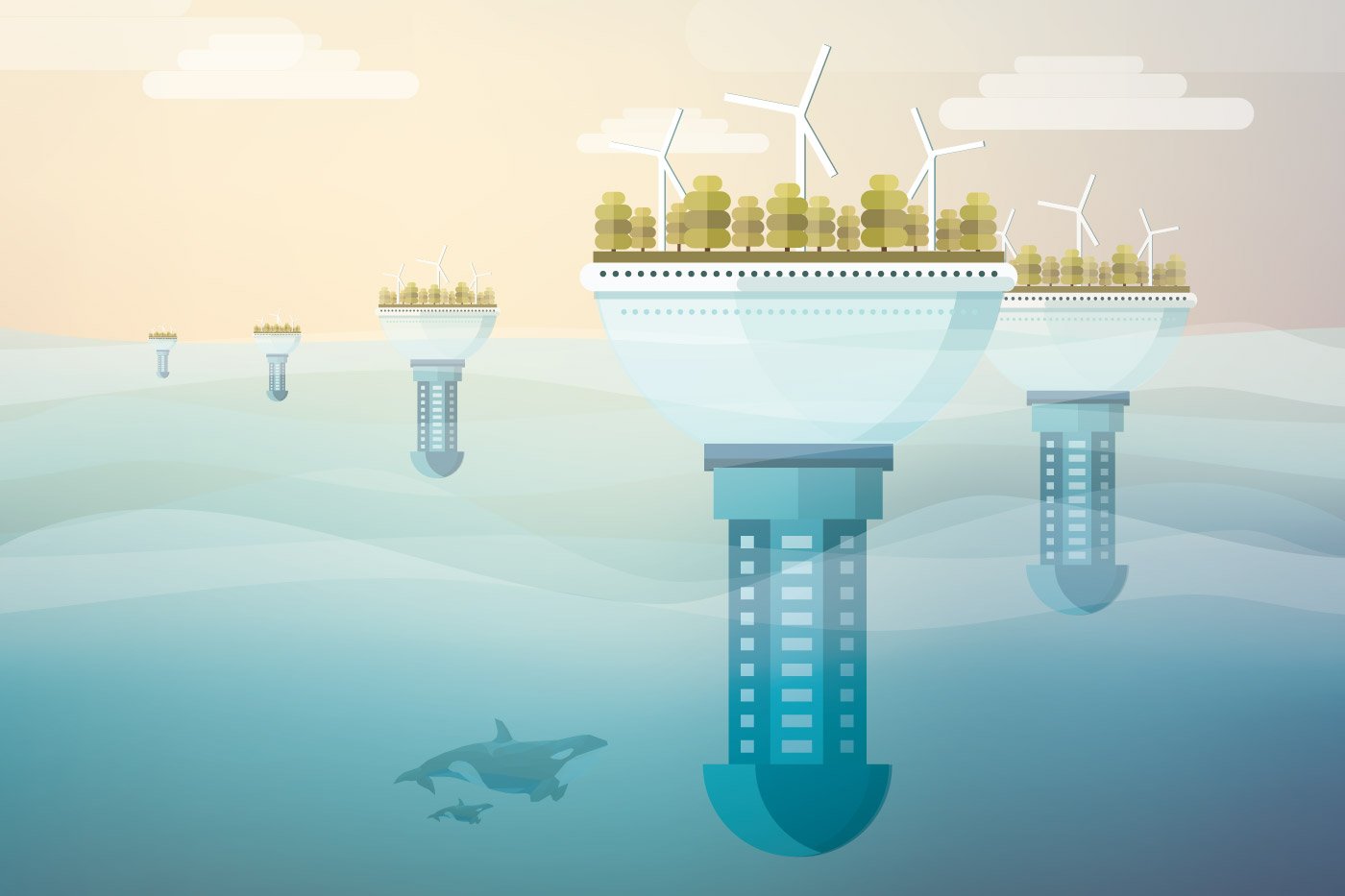 Imagine a fully-functional city, bobbing in the ocean waters, floating like a rubber duck in the tub. The city and all of its occupants gradually follow nature’s ebb and flow, coasting along the earth’s currents. Does this sound like science fiction? That’s because it is. But the plans for floating city developments, along with the technology enabling them to work, already exist. In fact, two seasteading proponents successfully lived on the first ever floating modular seastead prototype, created by Ocean Builders. The couple, made up of retired Bitcoin investor Chad Elwartowski and Thai native Nadia Summergirl, are touted as the “first seasteaders,” according to the Seasteading Institute, whose goal is to build politically-autonomous cities on the sea. But the first seasteaders’ stay was cut short when the Thai navy confiscated the prototype after just a few weeks because they claimed it threatened the nation’s sovereignty and interfered with international shipping routes—a large feat for such a tiny vessel and a crime that can be punishable by death in Thailand.

Ocean Builders has since begun a new venture in Panama to test their Seapod concept. They are currently accepting applications for seasteaders that want to join their Panama “Incubator,” that boasts one of the world’s largest 3D printers, which they intend to use for printing smart homes as well as a coral reef. Not so long ago, the idea of printing a coral reef would have also been written off as science fiction, so perhaps there is a possible future where floating cities exist. Elwartowski, who is in Panama working on the project, released a video in March describing plans to continue full-steam ahead. In regards to the COVID-19 outbreak, Elwartowski said, “We’ve been working hard, trying to get everything still going. We are not going to stop through the virus.” Later in the video, which tests an underwater drone, he continued, “No matter if you’re scared of the virus or the reaction to the virus, living out on the ocean will be helpful for both of those situations.”

Elwartowski doesn’t go into detail on how he envisions floating cities being useful for situations like COVID-19. But I spoke with Brydon T. Wang, a technology and construction lawyer and a researcher at the Queensland University of Technology. Wang, who studied architecture and public policy in addition to law, explained that floating cities could provide flexibility in terms of use, allowing buildings to “be mobile and ‘reprogrammable’ to different parts of the city and beyond.” In terms of COVID-19, he said, “floating emergency housing facilities could be repurposed and attached to cities and used for quarantine facilities.” Converting buildings into temporary hospitals during the pandemic has been a huge challenge for everyone involved, requiring people to work around the clock to get these treatment centers open for use. Floating cities could help alleviate this stress. Wang said, “These floating structures could come with state-of-the-art medical facilities that can be towed to areas [or] cities of need, depending on how each site is impacted by new waves of COVID-19 infections (or any other pandemic).”

Wang also gave the example of how the widespread bushfires in Australia caused a need for emergency evacuation, stranding thousands of people on a beach in Mallacoota. “When navy vessels were sent to evacuate them, families with infants and toddlers could not evacuate as they needed to climb ropes to get onto the vessels,” Wang explained. In emergency situations, accessibility can be the difference between life or death for society’s most vulnerable members who lack the mobility to escape without assistance. Floating emergency structures can be designed to have easier accessibility, closer to the water’s surface, as well as on site emergency housing and all of the facilities needed to sustain displaced communities for extended periods of time—perhaps even full time.

Last year, as a part of its Human Settlements Programme, UN-Habitat, the United Nations announced an initiative to research floating city developments as a sustainable solution to the growing problem of urban density, land scarcity, and climate change. During a high-level roundtable on the topic, UN Deputy Secretary-General Amina Mohammed explained that the way we’ve built cities in the past, citing New York and Nairobi as examples, is not sustainable for the future because of their impact on climate change and susceptibility to rising sea levels. She explained how floating cities can help communities in places like Bangkok, where the risk of flooding threatens to destroy them. Mohammed cited other examples including Lagos, where “the urban poor have responded to the lack of land and a growing population by living in floating villages on the outskirts of town.” She also mentioned Singapore, where scarcity of land has led to massive reclamation, expanding the city’s “size by almost a quarter” (and undoubtedly destroying marine habitats in the process).

Land reclamation can have detrimental environmental impacts, and according to Wang, it’s also “a slow process—the ground needs to settle after you create it. However, you could manufacture multiple modules of floating structures at different sites and assemble these on-location comparatively quicker than land reclamation.” Floating developments are far more eco-friendly than land reclamation, but they are also more resilient to the effects of climate change. “Floating cities are a means of ensuring climate resilience, as buildings can rise along with the sea,” Mohammed said. Land reclamation developments, on the other hand, are still susceptible to rising sea levels and flooding. Wang reiterated these sentiments and added, “Floating structures are also earthquake resistant unlike reclaimed land.”

Mohammed provided examples where successful floating development precedents exist: “Cities such as Seattle, Jakarta and Mexico City have made way for houseboats and floating markets for some time,” expanding the places where people can live and work onto the sea. A few summers ago, I visited Victoria, British Columbia, which boasts one of these floating markets called Fisherman’s Wharf. Shops, restaurants, boats, and colorful float homes are all connected by a grid of docks along the harbor. I remember thinking that the unique location probably garnered a premium for float home rentals—what tourist wouldn’t want to wake up to a harbor seal splashing outside their window? It turns out that these particular float homes were not for rent, but the added tourism benefit could help cities broaden their economic activity.

Existing floating developments, like those in Victoria, often run on the same power sources as the mainland and require the same access to utilities as land developments. However, the newer, more futuristic floating city models run autonomously on green energy with net zero emissions and actually support marine environments rather than disturb them. “When entire floating communities are designed from scratch, they can be designed as climate‑neutral from the onset. Why not use the abundant wind and water to cover all of their electricity needs?” said Mohammed.

Elwartowski’s confiscated prototype ran on solar provided by rooftop panels. Many of these floating city concepts include things like hydroponic grow walls to farm food and ways to convert algae into energy or rain into usable water. More advanced concepts like Oceanix, designed by BIG architecture firm, or Aequorea, a futuristic “oceanscraper” by Vincent Callebaut, also boast fully developed underwater marine habitats that thrive just below the water’s surface—a Utopian Atlantis that looks as though it could house mermaids as well as people. Some of these concepts can feel a bit foreign or hard to imagine in real life. They end up lumped in with flying cars and actual hoverboards (not those wheel-based imitations that caught fire and ruined Christmas a few years back). But what if, instead of dumping money into land reclamation and the creation of artificial islands, we focused on actual, sustainable floating city concepts?

Elwartowski may have been onto something when he said that COVID-19 could act as a catalyst in helping people realize the value of living on the sea. Indeed, densely-populated places like New York City have seen a recent exodus of people moving to the suburbs. Whether the result of the work from home movement, a desire to avoid crowds, or because so many businesses (and livelihoods) were shut down, the flocks of people leaving the city for more rural areas means that urban density could be less of an issue in the future. But Wang sees this shift in urban density happening only to a certain degree: “In many places, there are limits to how much the suburban surrounds can absorb increased population growth.”

COVID-19 also seemed to be a catalyst in lessening the impacts of climate change. Many cities reported reduced smog and clearer skies as people across the world were forced to stay home, meaning less cars on the road and less energy consumption. While these COVID-19 “side effects” may only be temporary, they also teach us important lessons about the future’s possibilities. We have a legitimate conundrum: continue excavating land from the sea to bulk up our coasts, protect us from rising sea levels, and provide more land to build upon, or explore different directions.

While seasteaders like Elwartowski might be after autonomy to self govern, the concept could also be used to create more of these live-work-play floating markets like Fisherman’s Wharf in Victoria, but on a grander scale. Floating cities don’t necessarily need to drift through international waters. They could instead be used as a portable extension of land. Mohammed welcomes both humble houseboats and oceanscrapers alike in the discussion about sustainable floating cities. She also approaches it in a practical way, much like any other commercial development with partnerships that allow stakeholders in various roles to contribute expertise.

“Innovators, researchers and private sector leaders can develop the technologies that allow floating cities and buildings to be constructed in a manner that is sustainable, resilient, and liveable. Governments can create […] incentives for innovation to thrive. And local authorities can facilitate the construction of pilot projects,” Mohammed said. Much like the planning of any city, floating cities will rely on technology to establish an infrastructure that supports the needs of the population. Floating cities don’t need to be libertarian utopias of the future. They can be more sustainable extensions of the cities that already exist—a green alternative to destructive land reclamation or deforestation, a solution to land scarcity that doesn’t require actual land. 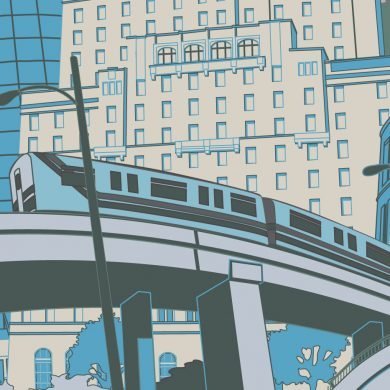