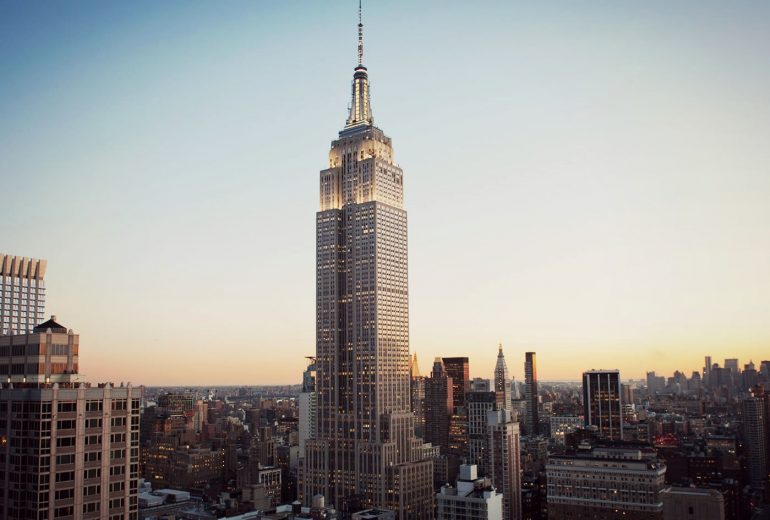 Empire State Realty Trust has installed a new elevator experience for visitors to the 1,454-foot-tall Empire State Building. One-of-a-kind mini-shows with sound, created by design studio Imaginary Forces, will play on the ceiling of the elevator cars both on the ascent to and descent from the world-famous 86th Floor Observatory. Three elevators have been equipped with new technology, with the balance of the elevators being upgraded over time.

The experience is similar to the elevator ride over at the competing observatory atop One World Trade Center, where visitors are shown an animated timelapse of New York City’s construction. Floor to ceiling digital displays create the illusion that you are seeing the city skyline through elevator windows.

At the Empire State Building project, Imaginary Forces’ Creative Directors Dan Gregoras and Jeremy Cox led a team of visual-effects artists and audio composers, who began work in 2015, in creating two unique guest experiences. From the moment the elevator doors close, the ascent show transports visitors back in time to the construction of the tower, spotlighting workers, machinery, and materials in a fanciful depiction of the construction process.

On the descent, the show prepares visitors for the ride back to the New York City streets by showcasing different features of the art deco masterpiece lobby, with distinct features floating in to ultimately form the iconic mural that adorns the Fifth Avenue entrance.

The Connection Between Indoor Air Quality and Outside Air

In a statement, Observatory Director Jean-Yves Ghazi said: “Located at the heart of New York City, the Empire State Building provides fresh, fun and educational experiences. Our new elevator shows not only add entertainment for our visitors but by putting them on the ceiling, we give each visitor the opportunity to be fully immersed in our world.”

In recent years, Empires State Realty Trust has made major investments in energy efficiency, infrastructure, public areas and amenities, attracting first-rate tenants in a diverse array of industries from around the world. The skyscraper’s robust broadcasting technology supports all major television and FM radio stations in the New York metropolitan market.