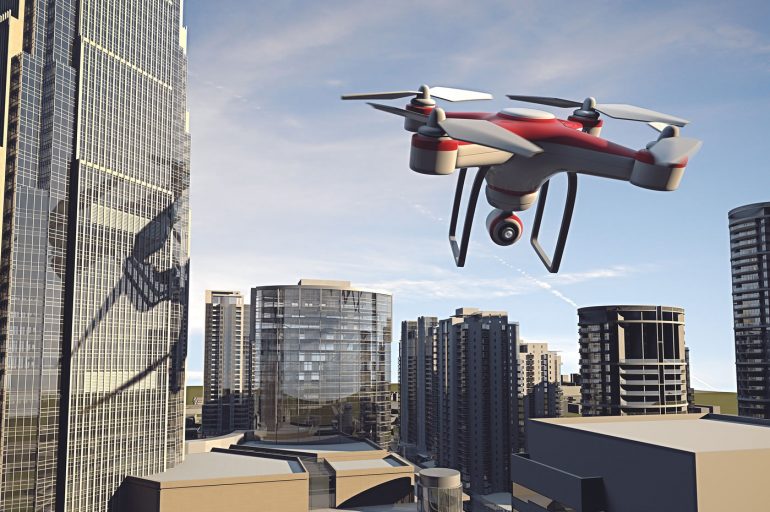 Do Real Estate Drones Fly in the Face of Federal Law?

In recent years, aerial drones have become cheaper, lighter, more sophisticated, and easier to operate. Many models now come standard with GPS and camera stabilizers. Forward thinking commercial real estate professionals are increasingly using drones to capture high-definition video and still photography for marketing materials and other applications like property inspections. But the FAA is claiming many of these operators may be flying in the face of federal law. The FAA asserts that it has sole regulatory control of all US navigable airspace, and according to the their own interpretation, drones operate in that jurisdiction.

Despite what some see as a power grab, the FAA recently granted over 1,300 commercial drone permits, also known as Section 333 waivers. The move was unusual because the FAA usually takes months to review an application. The waivers apply to UASs (unmanned aircraft systems) weighing less than 55 pounds. Real estate was mentioned in 153 of the first 500 applications — more than any other industry. But rather than clarifying the use of drones for commercial purposes, the FAA’s recent actions may be causing more confusion. Depending on the city or state that you are in, there are different rules, which don’t always echo the FAA’s guidelines.

In fact, the FAA is still in the process of creating comprehensive rules that will govern how commercial drones can be used, including analyzing more than 4,500 comments to a draft proposal made public earlier this year. Under the pending proposal, drone operators would have to be at least 17 years old; must always have visual line-of-sight; cannot fly the aircraft over anyone not directly involved in the operation; can only fly in daylight; cannot fly the drones more than 500 feet above ground level; and must be vetted by the Transportation Security Administration (TSA).

“Commercial use of unmanned aircraft systems has the potential to create new jobs and businesses specializing in their uses,” said NAR President Chris Polychron in testimony before the subcommittee. “NAR and its members are excited about these possibilities but also understand the need to balance them with protecting the privacy and safety of citizens and other users of the country’s National Air Space.”

Polychron said that NAR is also interested in the possibility of separate, easier regulations for a “micro” category of drones — machines weighing less than 4.4 pounds. Most operators within real estate are using these small drones. It’s worth noting that Canada already has separate regulations for this drone classification.

Beyond pretty marketing videos, drone technology has a wide range of potential uses in commercial real estate. Drones can make it easier to view rooftop mechanical equipment, and facades or windows on high floors. They can be used for property inspections like showing the before and after of a roof replacement or looking at clogged rain gutters. Other uses include security, traffic analysis, damage assessment after a flood, earthquake or fire, and remote surveys of difficult to access land parcels.

Along with all of these potential uses, there is also the potential for liability. General liability and umbrella insurance policies often don’t cover commercial drones because they have aerial vehicle exclusions. Unmanned Risk Management, the largest underwriter of aviation insurance in the world, claims to have insured drones in all 50 U.S. states. The drones Unmanned Risk Management insures have an average value of $50,000-$70,000, but they also insure smaller drones like the popular Phantom. A commercial insurance policy for a Phantom covering liability up to $1 million can run about $1,350 a year.

Not only can drone operators be liable for physical damages resulting from a drone mishap, they could also be criminally liable in some jurisdictions for flying in the wrong place. For example, Oregon’s drone law (HB2710) allows owners of property to take action against drone operators who fly a drone less than 400 feet over their property if “(a) The operator of the drone has flown the drone over the property at a height of less than 400 feet on at least one previous occasion; and (b) The person notified the owner or operator of the drone that the person did not want the drone flown over the property.”

Governor Brown decided to help protect the rights of companies using drones in good faith and not impose “burdensome litigation.”

According to an IREM (Institute of Real Estate Management) Legislative Whitepaper published in February, 20 states have enacted laws addressing the issue of drones: Alaska, Florida, Hawaii, Idaho, Illinois, Indiana, Iowa, Louisiana, Maryland, Montana, Nevada, North Carolina, North Dakota, Ohio, Oregon, Tennessee, Texas, Utah, Virginia, and Wisconsin. IREM hasn’t taken a formal stance on drone policy but it has suggested that the FAA adopt rules that would allow limited commercial drone use during nighttime hours because real estate managers and owners often use drones for geothermal imaging and this can best be done in the dark.

Notably absent from the list of states with specific drone laws is California. Just last week the Governor Jerry Brown vetoed a bill that would have restricted an operator’s ability to use their drone across private property at an elevation of lower than 350 feet. Proponents of the bill were primarily concerned about privacy. They cite a 1946 Supreme Court case that ruled landowners have ‘exclusive control of the immediate reaches’ above their land.

Brown disagreed, saying that the growing use of drones by real estate companies – and the prospect of tech giants like Amazon and Google continuing to expand their drone testing and technology – could have been harmed by the law. Instead, Governor Brown decided to help protect the rights of companies using drones in good faith and not impose “burdensome litigation.” California’s huge media industry certainly played a role in his decision, as did Silicon Valley, home to some of the biggest drone companies, like 3DR.

How PropTech Startups Can Avoid the Scaling Struggles

Howell advises against hiring a drone operator based on cost alone. “I’ve got guys on Craigslist saying they’ll shoot drone video for a hundred bucks. It’s a new thing getting a lot of buzz so real estate brokers are saying let’s get some drone footage. But they’ve never done it.”

In the past, real estate companies have built relationships with photographers they like and trust but with drones they seem more willing to take a risk, added Howell. “I liken drones to a paintbrush. Anyone can buy one but it takes a lot of practice and training to be an artist. If you want great photography, you need to be willing to pay for it, same as ever. Anyone can buy a drone and fly it — they have GPS — but getting good shots while not crashing into a building is a whole other ball game.”

Growing up the son of an Emmy winning stunt coordinator, Howell was exposed to movie-making at an early age. His own IMDB profile lists hundreds of appearances in film and television as an actor, stuntman and stunt coordinator. In addition to an ongoing career in the stunt and acting world, Howell’s interest in photography lead him into the drone business. Obviously he takes a cinematic approach but he cautions against relying too heavily on aerial shots. “No one wants to just look at rooftops. With video, it’s great to show the overall property and the street it’s on, but each property is unique and needs to be shot from its best angle, just like an actor or model.”

Tim Charles, of Los Angeles-based CrossFlight Media, explained that drones allow building owners and brokers to showcase an asset in the proper context. “The ability to show proximity to restaurants, freeways, and city-centers in an engaging and eloquent way is what makes drones such a special marketing tool,” he said.

According to Charles, demand for drone footage of Southern California commercial real estate is relatively weak compared to residential real estate, but he expects it to climb as market acceptance takes place. Charles believes eventually we will get to the point where drone footage is the norm and those without it will be at a disadvantage. “For Class B and C assets, the perceived value doesn’t currently exceed the cost, so the market is limited to servicing high-end properties with large marketing budgets,” he added.

Professional drone operators like Howell and Charles are providing commercial real estate professionals with new tools and soaring new perspectives, but the industry is also confronting a lot of growing pains. NAR’s President Chris Polychron reminded regulators that the real estate industry is on the side of progress: “As end-users of drone technology, [real estate professionals] want clear regulation that permits the commercial application of UASs in a way that is affordable to users and safe for their communities, both on the ground and in the air.”

Transportation Secretary Anthony Foxx said the FAA is trying to finalize a comprehensive proposal by the end of September and pass it along to the White House Office of Management and Budget for further review.