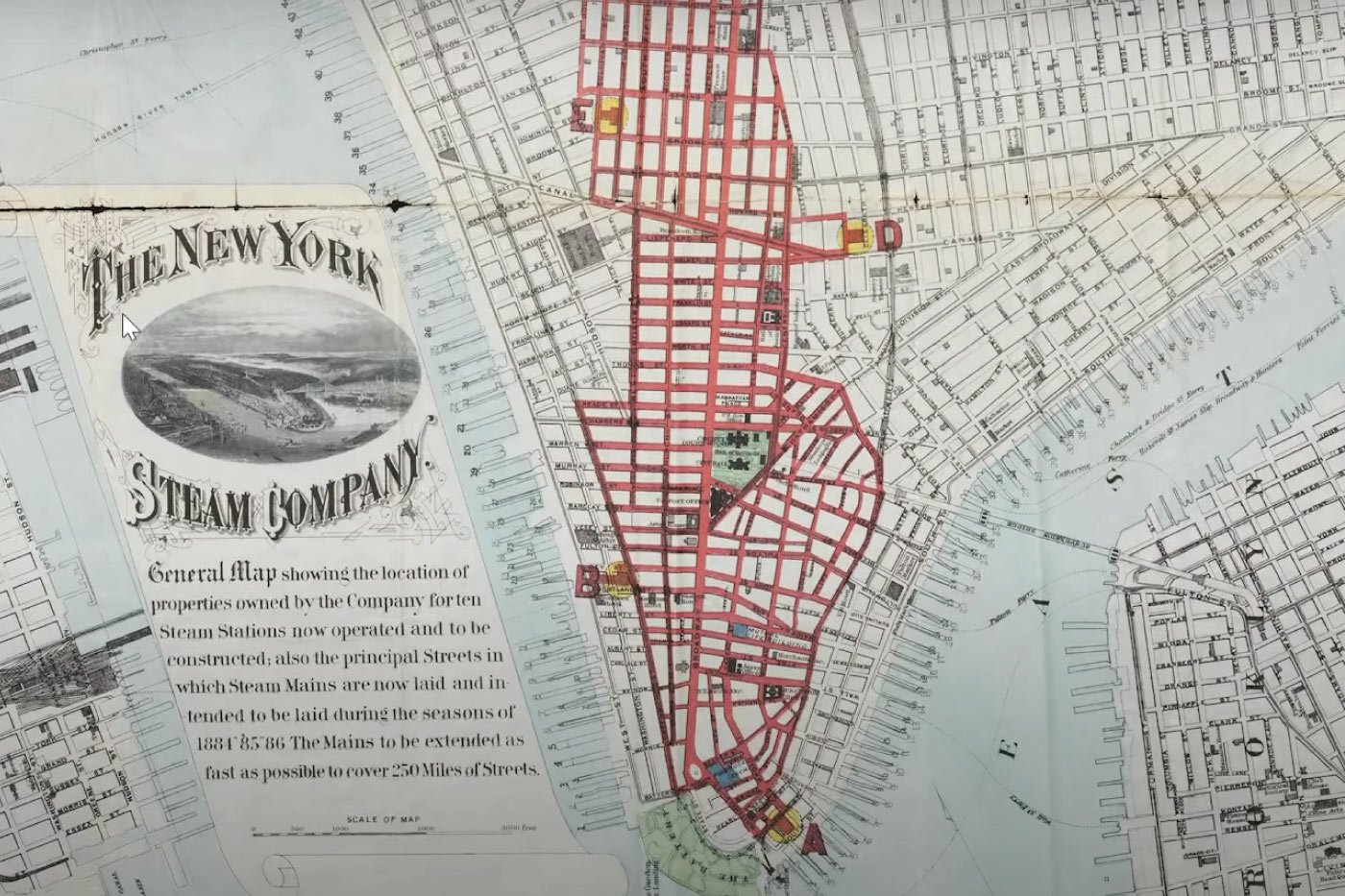 District Energy Is Part of America’s Past, Why Not Its Future?

The modern city was invented by a few intrepid people in the span of only a few decades, all in the same metropolitan area. The era was the 1880s, a period called the “Second Industrial Revolution.” The place was New York City. The cast of characters was small but eccentric, the most renowned of which was Thomas Edison. But while Edison was experimenting with electricity in his laboratory in the New Jersey suburbs of Menlo Park, another man was also inventing a way of transmitting power that would also change the way our cities worked and looked. His name was Birdsill Holly.

Holly only had a third-grade education, having dropped out to take care of his family after his father died unexpectedly. He worked his way up through the ranks at a machine shop to eventually be able to own one himself. It was in this shop, through hands-on fabricating, that he was able to invent a number of important technologies like the fire hydrant and the rotary water pump. He also figured out that he could transfer energy with very little loss, by filling pipes with steam. This became the foundational breakthrough for what is called district steam, in which a large boiler sends heat over long distances using a system of high-pressure pipes. This was the basis for many of the steam systems that are installed in cities today, the first and largest of which is in Manhattan.

New York City’s district steam system grew to include around 2,000 buildings and is still used today (albeit with a few explosive problems) to do everything from heating the Empire State Building to sanitizing scrubs in New York Presbyterian hospitals to controlling the humidity in the city’s numerous art galleries. This system of over one hundred miles of pipe has helped shape the city of New York. Many of the tall buildings that make the city unique were only possible thanks to the shared infrastructure costs of this heating network. The buildings themselves would all likely have smokestacks on their roofs if not for district steam.

District steam is just one example of the broader category of district energy, which provides the buildings in an area with hot or chilled water, heating, cooling, and sometimes power through an underground network of pipes, all leading back to a central plant. District heating and cooling are other examples of ways that water can be used to efficiently distribute energy. Seth Whitney is the President of Corix Cleveland Thermal, one of about 700 district energy systems (DES) located throughout the U.S. He explained that district energy is “about achieving economies of scale.” When an entire area or multiple buildings in a city are supplied by one central plant, “you no longer need each building to have its own heating and cooling units. You eliminate the need for individual boilers and chillers and water treatment systems” said Whitney.

The benefits of centralizing energy generation goes beyond lower infrastructure costs. “The labor pool for skilled, licensed boiler operators is shrinking, and each state has different requirements. Having someone on site who can do this is expensive,” according to Whitney. District energy systems require far less mechanical equipment, drastically reducing, if not eliminating, labor and equipment costs for facilities maintenance. Whitney explained, “With district energy, you get longevity. You’re not going to have to touch or replace those parts for decades.”

Like any utility, district energy requires buildings to be physically attached to the main system. Existing buildings require retrofits as well as an underground pipeline, and costs can vary depending on the building’s location, how built-out the existing pipeline network is, the location of the mechanical room, property size, and so on. New construction installation costs are typically less expensive because the building will no longer require as much heavy duty mechanical equipment if it’s running on district energy, which balances out the cost of installation. Still, initial installation costs may be expensive in some cases where extensive pipelines need to be laid, but these costs can be built into the ongoing rate structure. “In a comparison of economics, district energy wins every time in the long run,” said Whitney.

Corix Cleveland Thermal originated near the turn of the twentieth century as a car powered by steam generated from the Cuyahoga River, which was used to transport goods to and from downtown. Throughout the years, the Cleveland DES has changed ownership and undergone several updates and retrofits to improve efficiency. “The most recent update was within the last three years where we transitioned our plant from coal to natural gas, which is a much cleaner source of fuel,” Whitney explained. Many DES throughout the country have made similar improvements, like switching from coal to natural gas, which positively impacts the environment.

District energy isn’t limited to the municipalities. College campuses, hospitals, industrial parks, and military bases often set up their own microgrids of district energy. Princeton University’s system supplies over 150 buildings that comprise its campus. Many district energy systems, like Princeton’s, are connected to a combined heating and power system (CHP), which allows it to provide power in addition to providing water, heating, and cooling for its buildings. Because the energy is delivered to each building via an underground infrastructure of pipes, this also eliminates the need for separate fuel deliveries, which can be costly as well as taxing on the environment.

By design, district energy reduces pollution and increases the use of sustainable energy by centralizing the power source and eliminating the need for separate fuel deliveries. In British Columbia, Canada, some Corix plants rely on renewable energy sources like biomass, which can include tree trimmings and solid municipal waste. Regardless of the energy source, district energy systems can “achieve energy efficiencies above 80 percent,” according to the Environmental and Energy Studies Institute. Whitney explained, “In Canada, where they have a carbon tax, we’ve seen a ton of growth. Many buildings are switching to district energy because it’s produced cleaner, at a central plant, where they have emission reducing equipment.” Updating a centralized plant to run on cleaner fuel and use better technologies is easier and more economical than updating each individual building’s system.

In New York City, a bill was adopted last year that requires buildings over 25,000 square feet to reduce greenhouse gas emissions by forty percent by 2030, and that’s just the first in a series of reductions. Using district energy can help buildings upgrade their Energy Star ratings, obtain LEED certifications, and meet new standards for greenhouse emissions that many cities, including New York, are now requiring. Much of the steam generated by the New York City’s district steam system is actually a byproduct of electrical generation.

New York City’s Department of Citywide Administrative Services’ Division of Energy Management (DEM) is working towards the goal of reducing the city’s greenhouse gas emissions by fifty percent by 2050, in compliance with the bill. The Building Energy Exchange program partnered with the DEM to provide case studies for testing new technology that can be implemented to improve district steam systems. They tested three innovative technologies and found significant improvements in service quality and energy efficiency. Technologies like smart jackets provide customizable insulation for equipment like radiators and work to keep heat inside the system. The test, which used attached temperature sensors to measure data, found that the jackets “not only reduced fuel use, costs, and carbon emissions, but also kept ambient air temperature in the boiler room at a safe and comfortable 79ºF. In contrast to previous temperatures that could reach upwards of 90ºF, this was a welcome change for staff.”

The study recommended that DES and microgrids periodically undergo routine maintenance and update their equipment with basic technologies. These recommendations include a regular boiler cleaning and tuning, burner modulations, master venting, multisensor controls, and thermostatic radiator valves. Whitney also recommended the use of thermal imaging technology to proactively look for leaks in DES that can cause service interruptions.

As the technology for district energy advances, energy efficiency and savings improve along with it, and this is one of the primary reasons that energy-progressive cities like Copenhagen run almost entirely on district energy. Throughout the world, district energy is growing in popularity thanks to the United Nations Environment Programme’s recent launch of the District Energy in Cities Initiative. Its goal is to provide “a significant opportunity for cities to move towards climate-resilient, resource-efficient and low-carbon pathways.” Thus far, 36 cities worldwide have joined the initiative, which uses a model to teach cities how to outline projects for transitioning to district energy, use technology to enhance infrastructure, and obtain financing.

In the U.S., however, there is still a significant opportunity for district energy to grow. According to the U.S. Energy Information Administration, only five percent of commercial buildings in the country were using district heat as their main energy source as of 2012, when the most recently completed survey was conducted. Certain parts of the country, like New York City, are making emission reduction a priority, and while district steam has evolved quite a bit since its origins in the 1880s, it still requires the continued use of innovative technologies to optimize outdated systems and create more reliable service. Throughout the world, district energy systems are upgrading to run on cleaner fuels, using better technology. The U.S. has an opportunity to create more energy efficient buildings, and owners have an opportunity to save money. “District energy is expanding throughout Canada and other parts of the world as sustainable energy becomes more of a priority,” said Whitney. So why not here in the U.S., where district steam was pioneered and refined thanks to cities like New York and people like Birdsill Holly? 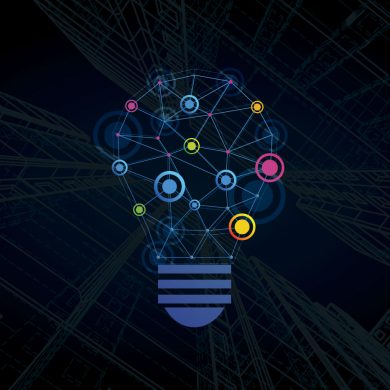 Lighting Is the Backbone for Smart Buildings