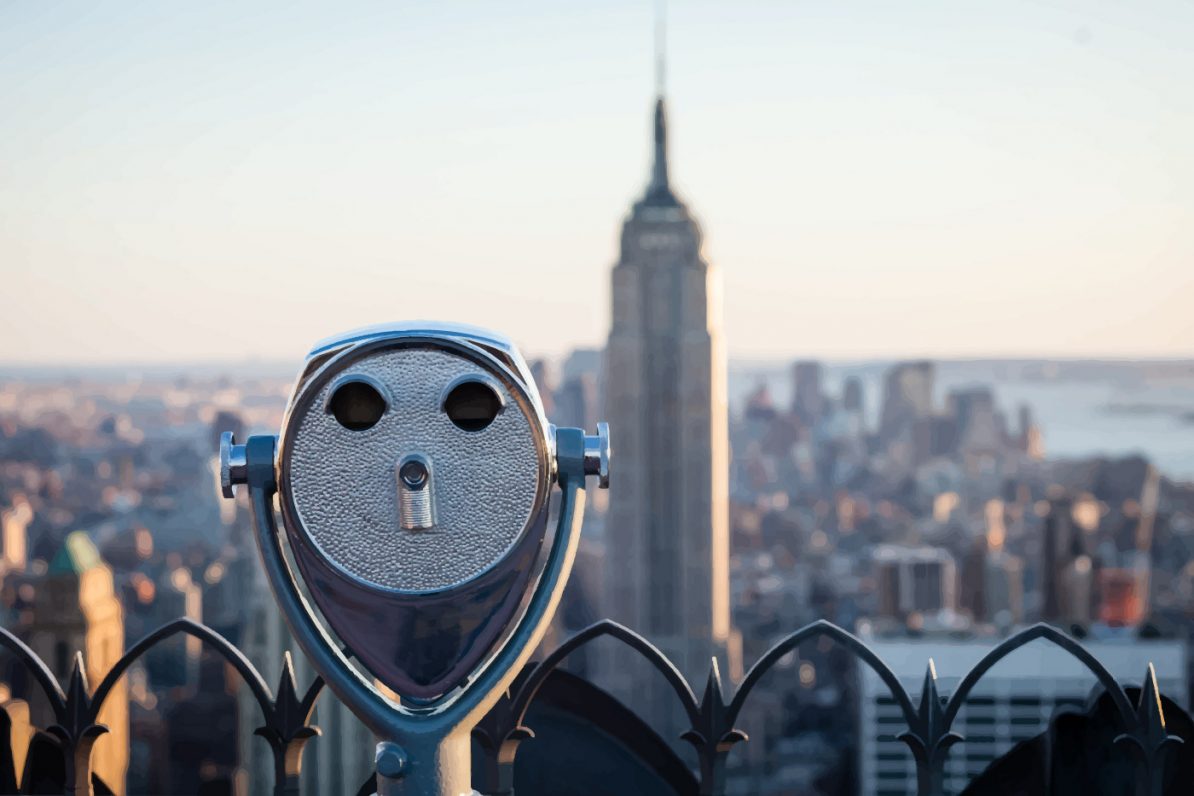 The most valuable part about the Empire State Building isn’t necessarily any of the 2.7 million square feet of office space. As valuable as offices are in one of the world’s most famous buildings, the most valuable space may just be the observation deck atop the 92-year-old skyscraper. Empire State Realty Trust (ESRT), the commercial REIT that owns the 102-story property and other buildings in the city, makes tens of millions of dollars a year in ticket sales to the famous sky-high observatory. With the city’s office market struggling to rebound back to pre-pandemic occupancy and leasing numbers, and with numerous economic headwinds both at home and abroad creating uncertainty about the future, selling tickets to its experiential tour has become even more imperative for the company and its investors.

ESRT officially formed as a public company in 2013 and began trading on the New York Stock Exchange that same year. While the Empire State Building is the company’s most famous building by far, the REIT owns several other office buildings in Manhattan that altogether total 9.2 million square feet of office space. But despite its other prime Manhattan real estate, ticket sales from the Empire State Building’s observatory remain an important part of the company’s revenue. In the REIT’s most recent earnings call, ESRT Chairman, President & CEO Tony Malkin said ticket sales are one of the top priorities for the company going forward, along with leasing space and the company’s focus on sustainability within its portfolio.

The public first got a glimpse of just how profitable the 102-story building’s observation decks on the 86th and 102nd floor are when the Malkin family filed its prospectus in late 2011 as it prepared to take the company public as a REIT. According to the filing, the observation decks brought in close to $60 million in revenue in 2010, a figure real estate magnate Richard LeFrak called “an astounding amount of money” at the time. While ESB’s observation deck may have been the first, other owners of supertall office towers in the city have been cashing in on the popularity of observatories as tourist attractions and tenant amenities, bringing in tens of millions of dollars in revenue. One World Trade Center’s 102-floor observatory, One Vanderbilt’s observation deck SUMMIT, and Edge, a 100th-floor observation deck at 30 Hudson Yards, have all emerged recently as popular tourist attractions and competition to the Empire State Building.

In the fall of 2019, just a few months before the pandemic hit, ESRT unveiled $165 million worth of renovations to the Empire State Building’s observation decks. The four-year project involved adding floor-to-ceiling windows on the 102nd-floor observatory and remodeling on the 86th-floor open-air observatory deck. The building owner also added 10,000 square feet of exhibit space that visitors pass through on their way to the top of the building. At its height, annual observatory ticket sales reached $131 million in 2018.

After the pandemic hit, sales plummeted as a result of widespread closures. By the first quarter of 2021, observatory ticket sales were down 74 percent from the prior year. And while sales have continued to grow significantly each quarter, they have struggled to return anywhere near previous levels. However, the latest numbers show a lot of improvement: the observatory’s annual revenue was $40.6 million in the first half of 2022, nearly three times higher than sales in the first half of 2021, which were just $10.9 million. That’s also been helped by increasing the price of tickets to the observation decks. “Even with our higher prices, people love it,” Malkin said.

Malkin touted the building’s popularity as a top tourist attraction repeatedly during ESRT’s second-quarter earnings call, emphasizing its current ranking as the top attraction in the U.S. and number three in the world on the influential review site Tripadvisor. In the first half of this year, 1 million visitors passed through the building’s doors, and in the second quarter, visitors to the observation deck reached 60 percent of levels seen in 2019. Tourism numbers, especially international visitors, are still on the rebound, something Malkin partially blamed on airport mismanagement in Europe. “Everyone can see they’ve botched the reopening of their airports,” Malkin said. “I think it makes internal travel in the United States look like a dream.” A forecast from New York City’s marketing arm NYC & Company, estimates that the number of international tourists to the city will hit 11.4 million in 2023, nearing the number of total visitors in 2019, which was 13.5 million.

Another way ESRT is looking to beef up its revenue is by cashing in on the flight-to-quality trend in the office market. The company recently announced plans for a new amenity space at the Empire State Building that will include a meeting space for 400 people, a basketball court, a tenant lounge, food and beverage service, and a reservable lounge space with golf simulators. But despite these latest efforts by the company and encouraging leasing numbers since the beginning of the year, ESRT’s stock prices have fallen by 30 percent.

When pushed by an analyst during the second quarter earnings call on whether the company’s board and investors are really endorsing the company’s strategy at the moment, given the stock’s poor performance and how the market is pricing, Malkin didn’t back down, saying “If you’re asking me whether or not I plan to push on a wet string to tell the company forward no, we’re just going to be intelligent and logical as we go through this period.” Malkin and other executives said they wouldn’t rule out selling some of the company’s real estate assets if they found the right deal. At the moment, ESRT has put two properties on the market: 500 Mamaroneck, an office building in suburban Westchester County just north of Manhattan, and 10 Bank Street, another suburban New York office building.

As the Empire State Building’s owners work toward bringing its observatory revenue back to pre-pandemic numbers, recent office leases and expansions in other parts of its portfolio have been bright spots for the company. In the second quarter, ESRT reported leasing more than 320,000 square feet across its portfolio, including iCapital expanding its footprint by two floors at One Grand Central Place, a 1.2 million-square-foot office building located directly across from SL Green’s supertall office building, One Vanderbilt. Another of the company’s major office assets is 1400 Broadway in the Garment District, where New York-based Signature Bank recently added 33,000 square feet to its space.

I visited the Empire State Building’s observation deck recently on a mild September evening just as the sun was beginning to set. I’ll admit, despite living in New York City for the past 12 years, I hadn’t been to the famous tourist destination since I was 4 years old on a family vacation to the Big Apple. Like so much about NYC, some things about the experience have stayed the same, and so much else has changed. Getting to the actual observation deck is a journey in and of itself through a maze of hallways and historical exhibits that tell the story of how the iconic building came to be, eye-popping figures about how many tons of steel went into the construction of the building (60,000), and how many tourists typically pass through its doors every year (4 million).

There are impressive interactive exhibits throughout the experience, which are bright, sleek, and feel a lot like being in a theme park. But the main event is, of course, the views. They are undeniably stunning and create a rare, almost hushed atmosphere despite the crowds of people. As someone used to traversing the city underground in the subway, standing so high above it, all felt peaceful and powerful. There were still the familiar ambulance sirens and cabs honking, but there was also a calmness and, more importantly, a breeze that you just can’t get on the sidewalk.

But is the whole experience, which pushes you to keep spending money—on posed photos in front of a skyline backdrop, the official gift shop visitors are directed through on their way out, and restaurants and retail repeatedly advertised within the base of the building—is it worth the $92 I paid ($100 with tax) for a peak ticket during sunset with the extra 102nd-floor sky deck upgrade? Honestly, yes, it was worth it. It’s a one-of-a-kind experience that has done a good job of modernizing certain aspects of the experience while focusing on elements of what makes the landmarked Art Deco skyscraper special—-its long and storied history.

There’s a lot of uncertainty in the market that ESRT will have to contend with going forward. A looming recession, continued high inflation, the possibility of more COVID complications, and the very real possibility of less international tourism as a result of the energy crisis in Europe. The company has clearly put time and effort into bringing in new tenants and keeping the ones they have, and upgrading and streamlining its observation deck experience. And the move to own properties in the multifamily sector, which has been performing exceedingly well lately and has more reliable returns, was a smart move as well. If international tourism to NYC does indeed get close to pre-pandemic levels by next year, ESRT will still face competition from other Manhattan observation decks. As has been the case for so much about the real estate sector over the past few years, company executives may have to hope for the best and plan for the worst.