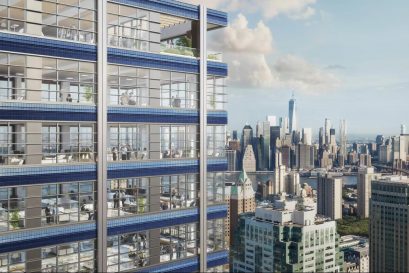 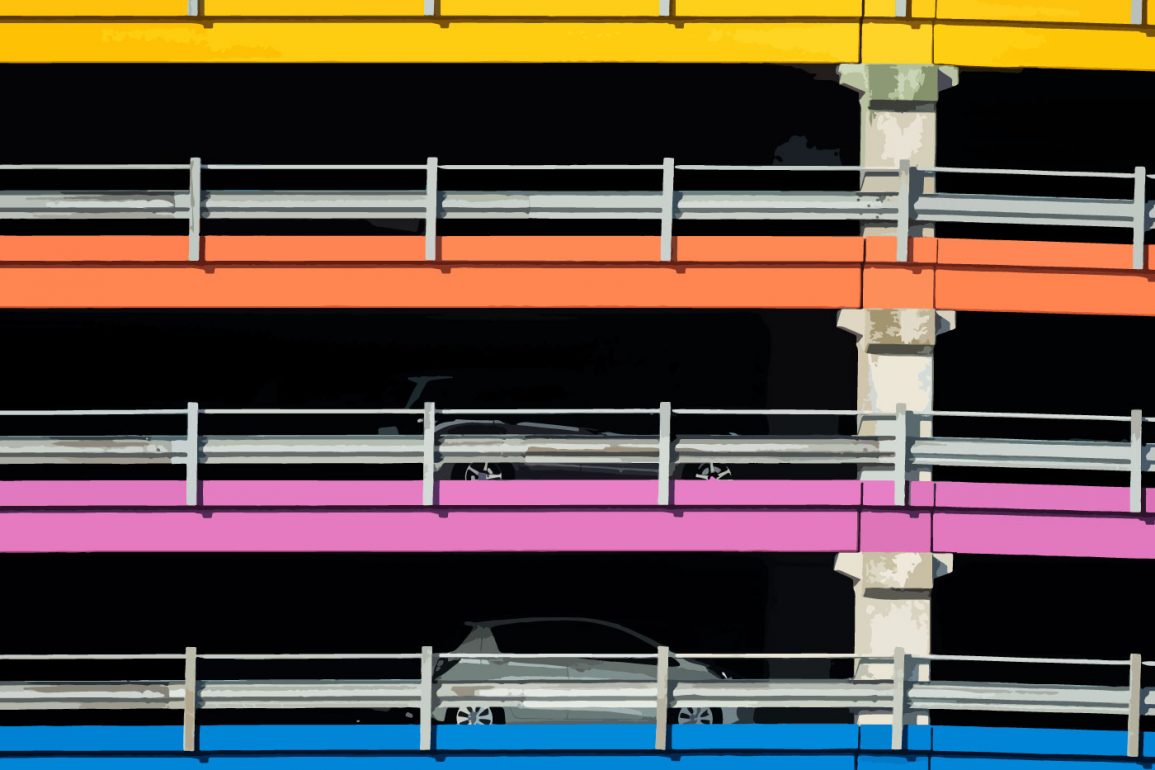 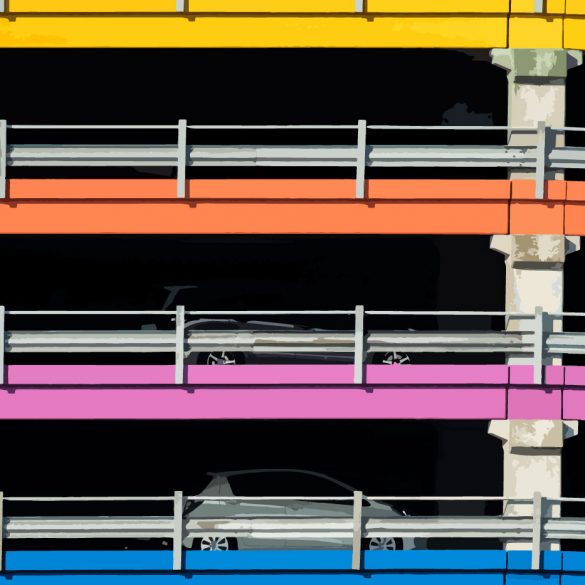 Designing a Parking Lot for a Future With Less Cars

Cities are some of the most valuable things in the world. When you think about our geographic groupings that way, you start to wonder how much of that value we give to the vehicles that transport us. New studies are cropping up that look at the enormous amount of valuable space parking occupies in American cities. The University of California at Berkeley’s Department of Civil and Environmental Engineering recently estimated there are 3.4 parking spaces for every car in the U.S. Another study by the Research Institute for Housing America revealed that in Des Moines, Iowa, there are 18 times as many parking spaces per acre than households.

Urban planners, architects, and building owners are increasingly looking at this massive use of land and asking, “Can we repurpose it?” After all, much of the parking spaces are lying vacant at any given time, especially as many U.S. cities head into a future of decreased driving and increased use of ridesharing services. In Seattle, for example, the Research Institute for Housing America’s study found the parking occupancy rate downtown has fallen to 64 percent. A combination of factors like ridesharing services, increased public transit, and the potential of self-driving cars all point to a future where Americans will be driving less, creating a decreased demand for parking.

Sejal Sonani, managing director of the Los Angeles office of HLW, a design, architecture, and planning firm, is one of many architects designing multi-use buildings that are future-proofed for challenges like the changing nature of driving and parking spaces. Sonani was the lead architect on a new 80,000 square-foot wood-frame building in West L.A. that designed two floors of parking that could easily be converted into additional office space in the future.

“There’s been a lot of news about autonomous and self-driving cars,” Sonani said. “So, the question came up, ‘What if we don’t need that many cars in the future?’ We designed this building for 100 years down the road. So, we only had to add a few modifications to make it usable for other purposes.”

Parking garages that are designed to be transformed into other spaces can be more expensive than developing older models. But future-proofing parking spaces may be a wise investment for building owners.

Only about 25 percent of 16-year-olds in the U.S. had a drivers’ license in 2017, according to transportation researcher Michael Sivak. Sivak’s research revealed that in 1983, almost half of 16-year-olds had a license. Part of the reason car ownership has dwindled for Generation Z is that more people in their 20s today are moving to urban areas and using public transit or services like Uber and Lyft. Owning a car can seem impractical and too expensive to the younger generation, especially during a time when the cost of purchasing even used cars has skyrocketed.

Self-driving cars could also significantly impact the future need for urban parking spaces. The Victoria Transport Policy Institute predicts that by 2040, autonomous vehicles (AVs) will comprise up to half of all road travel. The widespread adoption of AVs, while not guaranteed, would further decrease the need for car ownership, increase ridesharing, and decrease the ubiquity of parking lots and garages in many major urban areas.

With these trends in mind, building an adaptable parking lot seems to make sense, and it could be better than getting stuck with a traditional parking space and having to tear it down. Sonani told us building and designing a parking garage that could be converted into an office later down the line wasn’t as difficult as one may think.

Sonani said there were a few things her team had to keep in mind when designing the parking floors at 12414 Exposition Blvd to ensure they were adaptable. Some of those things included building code load requirements, floor slopes, ramps, and ceiling height.

From a logistics standpoint, converting the parking floors to office space in the future shouldn’t be that difficult, Sonani explained. “We’ve been converting much more tricky projects,” she said. “For example, we worked with Macy’s to convert retail space into creative office space. We had to take whole chunks of the building out.”

The parking garage was designed with floors that were still slightly sloped for drainage. Sonani said the slight sloping could be overcome with a filling slab if the floors get converted into office space. They also built “super-tall” ceilings in the parking floors so the tenant could put in stackers for stacking cars.

The ceilings are 17-feet high, which would lend itself better to an office floor in the future rather than a typical eight-foot ceiling in a parking garage. Sonani explained the sidewalls of the parking garage are non-structural infill walls that can come out down the road. Then, a glass wall can be built there in the future to bring light in.

If the parking space was to be converted to office space, the zoning density for the building would first need to be increased. The parking needs would come down for the building, which would be a more “macro” issue in Los Angeles to ensure everyone was on board with lower parking requirements.

Would Los Angeles be onboard with lower parking requirements? It’s hard to tell, but cities and towns across the U.S. are beginning to examine how much space they need for parking. Many U.S. cities introduced parking lot minimum requirements into their building codes in the 1950s, an era where car ownership dominated as the form of transportation for most Americans. Many of these zoning ordinances and building codes are still universal across the U.S., but urban planners are beginning to challenge them.

Buffalo’s ‘Green Code’ had varying effects from 2017 to 2019, but it largely encouraged less parking in downtown areas of the city. The trend of rethinking cities to make them less car-centric is something building owners should keep an eye on. Changing zoning laws in cities may mean less focus on parking spaces, more green spaces, and more focus on public transit and other forms of transportation.

Sonani sees adaptable parking garages as part of a larger trend in commercial building design. “I think it’s part of a trend of making buildings more flexible,” she said. “We’ve seen so many changes in the real estate industry. We really don’t know what the future will be like. But we should future-proof our buildings to the largest extent possible.”

Change with the market

Building owners should consider future-proofing their buildings in the design phase or through retrofitting for future trends like decreased car ownership. It’s wise to maximize a building’s lifecycle by looking at the trends affecting commercial real estate and ensuring facilities and systems don’t become obsolete.

Designing parking garages that are adaptable to different future uses, such as office space, is one way to do this. Parking garage reforms are gaining momentum across the U.S., as cities see the writing on the wall that autonomous vehicles, ridesharing, and other factors mean all the space we use for parking could be put to better use. Designing future-proofed parking garages isn’t as complicated as it seems and, while costlier, is likely a wise investment.

The risk of future-proofing parking garages is that these scenarios may never happen. Momentum for parking reform in U.S. cities may die out in a few years, and the promise of self-driving cars may never materialize. After all, startups like Zoox, a robo-taxi company, have long underestimated how difficult it is to get vehicle AI autonomy to full self-driving mode. Some computer science experts have also admitted we may never see fully autonomous vehicles. But for building owners, thinking of these scenarios certainly doesn’t hurt. If car ownership and the need for parking significantly decreases within a couple of decades, the question building owners may be asking themselves about their parking garages is, “Can they be repurposed?”