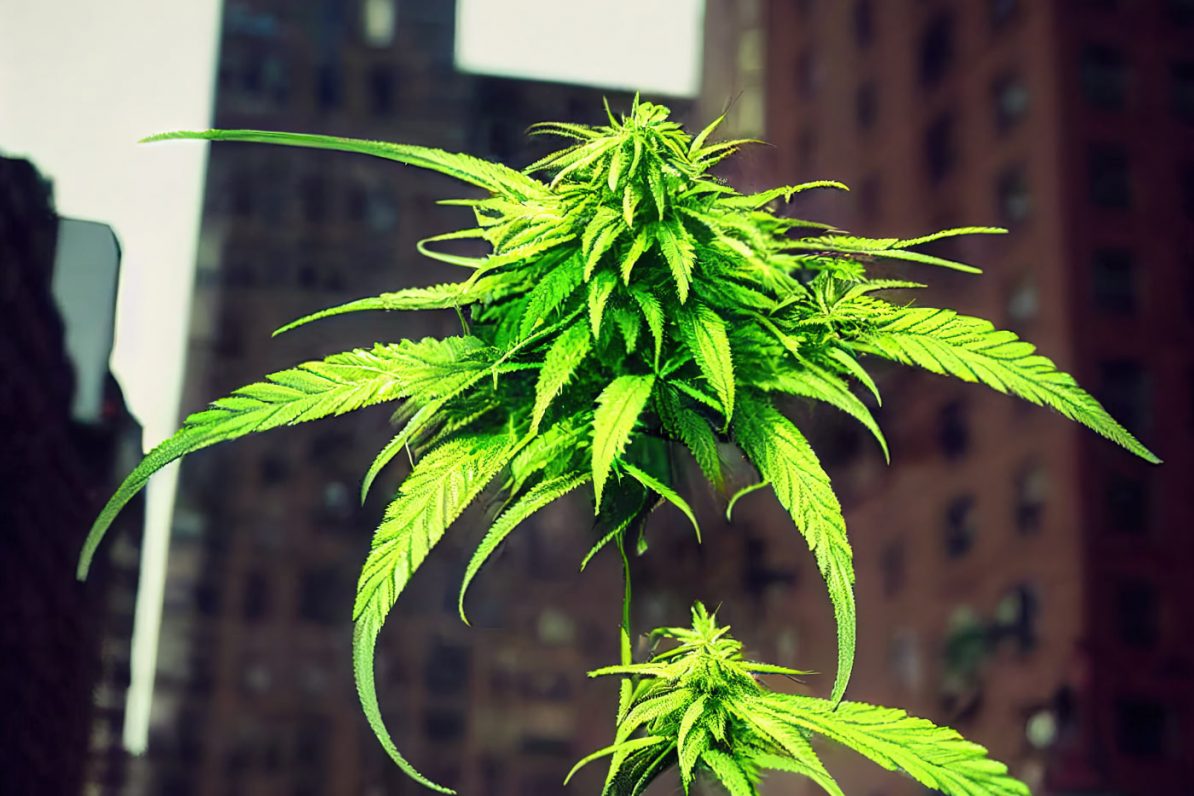 As more states pass legislation to legalize the medicinal and recreational use of cannabis, the opportunities it presents for the real estate sector have prompted a lot of conversations between cannabis companies, landlords, and brokers. Questions of legality and safety aside, many in the real estate industry are reckoning with long-held stigmas surrounding the once-illegal substance. For landlords considering signing a cannabis retail dispensary, one of the biggest concerns is how other businesses (and even property values) of neighboring areas may be impacted.

In New York, where cannabis was recently legalized, businesses, landlords, and brokers have all eagerly anticipated the release of the first licenses for cannabis dispensaries. While a recent federal lawsuit has stalled the approval of licenses in other parts of New York and Brooklyn, others are moving forward. After much anticipation, on Monday, the state’s Office of Cannabis Management (OCM) released the first 36 of a first round of 150 licenses to sell cannabis. As planned, the first licenses went to business owners who had previously been convicted of a marijuana-related offense and several non-profit companies. As the country’s largest city and one of the biggest markets for what the industry calls “legacy” customers (or buyers of illegal cannabis), New York is poised to be one of the hottest markets for cannabis retail.

I spoke to Juliana Whitney, the founder of Cann Strategy, a Las Vegas-based cannabis consulting firm, just a couple of days before the OCM announced the companies that would receive dispensary licenses. Whitney told me she hopes to land more cannabis companies as clients in New York. “Right now, I would love to have a hundred, but so far I have four,” she said. Whitney said she’d heard projections that the state will receive tens of thousands of applications for licenses in the state, though only a fraction will end up getting one. But rolling the licenses out slowly is probably a good idea to keep the market from getting oversaturated. With that in mind, Whitney sees New York state doing best with around 3,000 dispensaries. “They do well if there’s not too many,” she said. “If there’s too many, some will struggle and end up closing.”

The stakes for the burgeoning legal cannabis market are high. One projection from New York’s governor’s office estimated that the legal market could generate up to $1.25 billion in revenue over the next six years. “It’s the last bastion of a big marketplace,” said Andrew Lines, a Principal in the Valuation Advisory Services Group at the accounting firm CohnReznick, of New York, pointing to Texas and the Southeast as places that, if legalized, could be the next biggest cannabis markets. While those areas could be huge for the industry, it would undoubtedly be a difficult transition from illegal to legal. “If you look at surveys, most people, when asked where they get cannabis from, say a friend,” Lines said. “They don’t care where it comes from, just if it’s close and someone’s looking out for them.”

In many states where marijuana is legal, an overabundance of growers is starting to bleed into the illegal market. That’s leading to customers often buying cannabis grown legally from unlicensed sellers. Cannabis was legalized in New York state in March 2021, allowing residents to possess up to three ounces of cannabis and up to 24 grams of concentrated cannabis for personal use. Not long after, illegal shops selling marijuana proliferated quickly. These kinds of stores typically function as vape or smoke shops, but they also sell cannabis illegally.

While elected officials in some neighborhoods have tried to crack down on the so-called “pot shops,” it can be challenging to keep up. Greg Tannor, an Executive Managing Director and Principal at Lee & Associates at the firm’s New York City office, said some landlords know what they are doing with these kinds of tenants, and others don’t. “Most are in B and C locations in the city where landlords are just happy to get rent every month,” said Tannor. “Some landlords turn a blind eye.”

Depending on the jurisdiction, the local community can play a role in whether or not a retail cannabis business can move forward. In New York City, for instance, community boards can submit opinions to regulatory bodies on whether or not a business should be granted a license. However, in the case of cannabis licenses, New York’s state’s cannabis legislation does not expressly require that a community board must endorse an application in order for a license to be issued.

Community backlash against dispensaries has not been uncommon. Some have worried that the presence of dispensaries will lead to increased crime and decreased property values. However, there are studies that show the opposite is true. A 2018 study from the Cato Institute that focused on Denver, Colorado, found that the value of single-family homes close to dispensaries increased in value by 8.4 percent compared with homes located further away from the stores. A more recent study from the real estate marketing platform Clever Real Estate found that in cities with legal cannabis dispensaries, home values increased $22,888 more compared to cities where cannabis is illegal.

But there are other studies that show mixed results. One report from the National Association of Realtors (NAR) found that of states that had legalized cannabis the longest, 27 percent experienced a decrease in residential property values near dispensaries, and 12 percent saw an increase. However, the same report found that in states where medical and recreational cannabis was legalized for more than three years, there was a 42 percent increase in demand for warehouse space and a 27 percent increase in demand for storefronts.

Often the biggest hurdle for cannabis operators looking for a retail space is education, say industry experts. While some states continue decriminalizing and legalizing cannabis, it is still illegal at a federal level and in many states. How society has viewed cannabis historically and in pop culture is undoubtedly part of the real estate industry’s (namely landlords’) outlook on the substance. For Tannor, who operates a dispensary in Massachusetts, educating New York City retail landlords has often involved 30 to 45-minute phone calls and sometimes in-person meetings lasting two hours. “We probably have about 90 percent of landlords on board. Ten percent are still old school and think it’s a drug, even though it’s medicine,” he said. “That’s fine. There’s enough real estate to go around.” Helping landlords envision what the actual stores would look like was important to the education process as well. In expensive retail corridors of Manhattan, dispensaries are expected to look more like a fancy pharmacy that will blend into neighboring upscale retail. “Some retailers might seek out (dispensaries) to be near these,” said Tannor. “It’s not a cheap product.”

At this year’s MJBizCon, the cannabis industry’s oldest and largest conference (held in Las Vegas this time around) the mood of the conference was active, with a lot more people in the space now than there were five years ago. It’s part of what has grown to be a long buildout of the industry and what has become a slow trend of the mainstream accepting cannabis in a more clear and defined way. Lines, who spoke to me while attending the conference, has been a commercial real estate appraiser for 20 years, working on a range of property types in markets across the country. Six years ago, he decided to get into the cannabis space. Since then, he’s been actively evaluating dispensaries and cultivation centers in states where cannabis is legalized. As part of this, he performed studies on behalf of cannabis operators looking to secure zoning permits to open up a dispensary. “They do not cause a negative impact to surrounding property values,” Lines said, citing his own studies.

There are some key reasons why dispensaries don’t negatively affect property values, the first of which is a rent premium paid by cannabis operators that are well above the going market rate rent price. “Typically, when someone is paying top-dollar for a secure location, it means they’re bringing a lot of customers to the store,” he said. “It’s true for most dispensaries.” He’s found that retail dispensaries help create synergies up and down a block or within a shopping center, benefitting surrounding stores. He’s also compared value trends of housing within a quarter to a half-mile of a dispensary to the same housing stock over a mile outside of where a dispensary is located. Over and over, he found no price trend difference for those close to a dispensary. “That’s solid evidence it’s not impacting residential property,” Lines said.

As states begin the process of licensing businesses to sell cannabis, opponents to the plans have emerged. New Jersey legalized marijuana in 2020 and is still rolling out its licensing process. Despite voters approving the legislation, some residents have banded together to ban dispensaries from their city limits, with one widely-distributed sign in the college town of Princeton, N.J., declaring there are “too many unknowns.” Yet despite all the hand-wringing over cannabis dispensaries in neighborhoods, there’s strong evidence that they do not hurt property values and, in some cases, have a positive effect. What’s more, dispensary businesses often pay higher rent prices, stay in their location longer than other retail tenants, and tend to boost business for neighboring retailers, according to Lines. “Really they become a destination location in certain areas that bring a lot more consumer traffic to a neighborhood,” Lines said. “If anything, putting a dispensary on a street with lackluster performance changes the character in a positive way for the corridor.”

For states where cannabis has recently been legalized, like New York, Connecticut, Missouri, Maryland, and others, the transition from an illegal market to a legal market will likely be lengthy and bumpy. A lot of landlords will have to learn about the ins and outs of cannabis dispensaries and what is known about their impact on property values, and communities may or may not welcome retail cannabis businesses with open arms. The industry is currently struggling with layoffs and falling prices of wholesale marijuana. At the same time, advocates are pushing legislators to pass the SAFE Banking Act, which would protect banks that work with regulated cannabis companies from federal punishment. For many people, the stigma of cannabis will continue to be a sticking point that is hard to change. But with growing evidence that cannabis businesses often have a positive impact on nearby real estate, as the industry continues to expand in the coming years and more states choose to legalize cannabis, that stigma could start to fade.