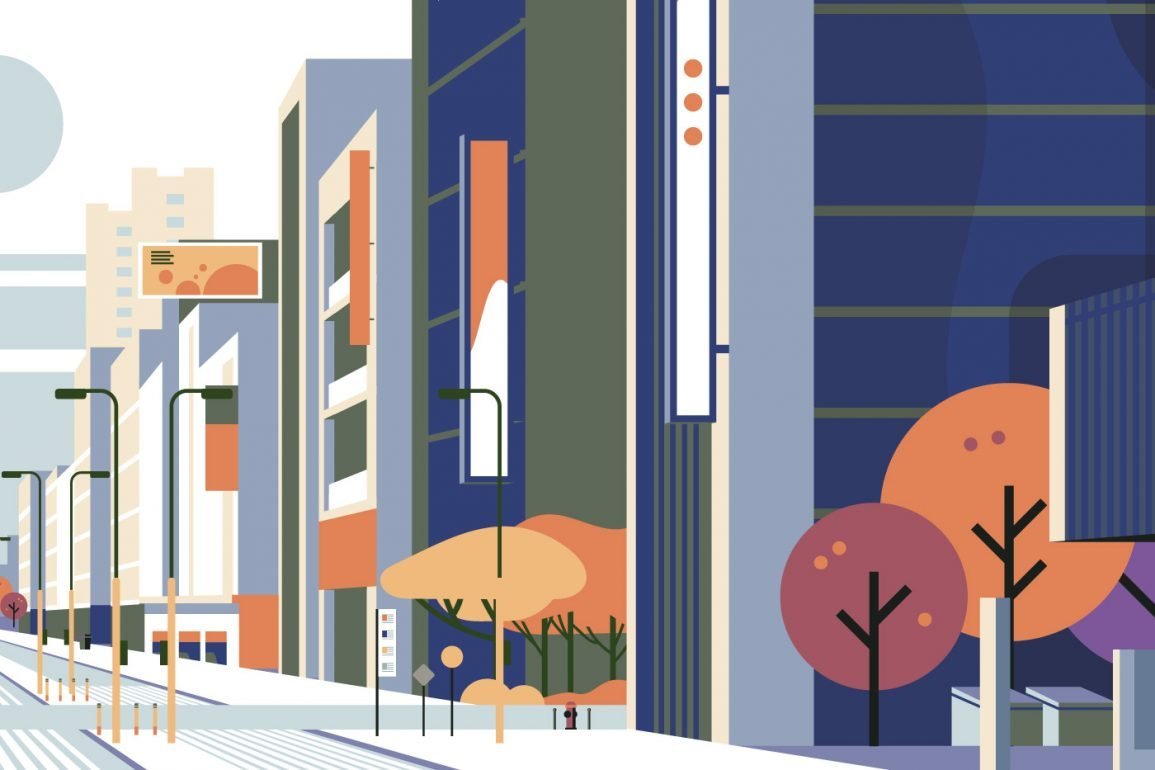 At the Petit Paris on Bloor Street West, a group of local business people would gather for meetings. Local businesses were struggling with the rise of the shopping mall, which was seeing widespread global adoption in the dawning of the 1970s. It was at one of those meetings where jewelry shop owner Neil McLellan and lawyer William Whiteacre came up with the idea to collect extra taxes from these struggling businesses to use the money to beautify the neighborhood (planting greenery, flower boxes, tidying up sidewalks). They also wanted to use the funds to promote retail through marketing and promotional materials. Basically, they wanted to be able to do for their local retailers what malls were doing for their tenants.

The local businesses were skeptical, obviously (extra tax?), but they forged through and were approved by the Ontario Municipal Board, making it the first Business Improvement Area (BIA). The Bloor West Village Business Improvement Area, established in Toronto in 1970, helped create an example for BIAs across the world, many who follow the same format—collecting an annual fee from local businesses to be used by an elected board of volunteers.

The money for BIAs goes towards marketing efforts to promote the businesses as a commerce district. The funds also go towards improving the aesthetics of the streets for passersby; today, Bloor Street West has solar powered gas lamps that light up the streets at night, a product of its local BIA. This is just one example of how a business improvement area or district, known as BIDs, can change a neighborhood for the better.

Meanwhile, the first BID in the U.S. was the Downtown Development District in New Orleans, established in 1974. This registered businesses in a local area with the local government, allowing them the authority to create a BID.

Some operating budgets for these centers of commerce are subsidized by the local governments. Each budget can range from a few thousand dollars to millions. Some American BIAs are operated by nonprofits that have a board of property owners, government officials, and local businesses.

Today, the US has over 1,000 BIAs. Some cities have multiple BIAs like Washington DC which has 11. They’re essentially business revitalization zones to help clean up and improve foot traffic, building community, and growing sales. It’s like a PR agency for your neighborhood and, often, the star of the show is street art.

One great example is the Miami district of Wynwood, which went from a dilapidated industrial zone in the early 2000s, to a thriving tourist hotspot with condo developments and an outdoor graffiti gallery. Now, the area, with the help of the Wynwood BIA, has represented over 400 businesses and property owners in a 50-block radius to build up the area as an arts district. For example, the area started hosting their Second Saturday Art Walk in 2002.

Wynwood BIA is also helping build an expansion to the state’s rail plan, which will have a new $2 million station in Wynwood on Northeast 27th Street. They also hosted the first-ever Bitcoin Conference in June and are planning a new “streetscape master plan,” which is basically DIY urban planning on a micro level that will allow for more pedestrian traffic with more crosswalks, wider sidewalks, bike lanes, and more street signs for traffic in this mixed-use district.

“This new streetscape master plan underscores our commitment to environmental sustainability and climate resiliency,” said Albert Garcia, Chairman and Co-Founder of the Wynwood BID. “The implementation of this plan will further enhance the pedestrian experience and quality of life of our residents, area employees, and millions of annual visitors.”

One benefit of BIAs is that they’re a hub of power when lobbying the local government to improve the area. This can help bring attention to important improvements like fixing potholes, designating bike lanes, and improving parks. A BID board can liaise with various levels of government to help improve the area, which in turn, will help local businesses.

Some BIDs partner with local business associations as well. The National Landing Business Improvement District, which ties together three thriving neighborhoods, Crystal City, Pentagon City, and Potomac Yard in Arlington, Virginia, has joined forces with the Restaurant Association Metropolitan Washington and offered a $100,000 relief program called Love Local. It helps local businesses who were severely impacted by the COVID-19 pandemic, helping fund local restaurants and businesses who needed the support the most. “Restaurants and small businesses are the backbone of our community in National Landing, and without a doubt, they are an essential ingredient to our recovery and future,” said Tracy Sayegh Gabriel, President and Executive Director of the National Landing BID.

The premise, she says, is “just one small step towards building back an even stronger National Landing district” and adding that “it is our hope that through community initiatives like Love Local, we can continue to provide a lifeline to help our local restaurants and small businesses survive, thrive or just simply support their employees.”

In Manhattan, the Grand Central Business Improvement District helped usher in new public artworks in a partnership with the NYC Department of Transportation’s Temporary Art Program, which helps connect artists and galleries to BIAs to bring culture to the streets.

Art is always a magnet for foot traffic and tourism. They recently planted three bronze sculptures by artist Jim Rennert in Pershing Square Plaza West located on the west side of Park Avenue. The sculptures show a male figure wearing a suit in various versions of being in deep thought or self-reflection. The area has recently been revitalized, too.

“When Pershing Square Plaza West first opened to the general public in May 2019, we hoped it would regularly attract temporary art installations from world-renowned artists,” said Fred Cerullo, President and CEO of Grand Central Partnership, Inc. “So, as the Grand Central neighborhood begins to come back to life after a tough year, we are really excited that the Plaza will play host to three dynamic, larger-than-life sculptures created by Jim Rennert.”

It isn’t art, but tech, too. Startups are always a key part of bringing together businesses. The Downtown Center Business Improvement District in Los Angeles has caught on. They recently introduced a tech center run by global accelerator Plug and Play, which aims to transform Downtown LA into the next urban innovation hub. By partnering with the L.A. Area Chamber of Commerce, Alliance for SoCal Innovation, and the Downtown Center, its goal is to turn it into an urban tech hub where startups and corporations have everything they need to live, work, and play. This BIA was one of the early ones, being founded in 1998, and is a coalition of over 2,000 property owners in downtown L.A., including Bunker Hill, the Financial District, and the Jewelry District.

“The Plug and Play partnership provides a perfect platform to connect corporate, civic, and entrepreneurial leaders around the core concept of a vibrant live, work, and play,” said Nick Griffin, Executive Director, Downtown Center Business Improvement District. He calls the area “a hub of innovation and creativity, where arts and culture meets technology and business, and where commerce and community come together.”

In Miami, other districts prove they’ve got their finger on the pulse of the city’s culture. The Lincoln Road Business Improvement District recently partnered with the City of Miami Beach to bring more culture-oriented businesses to Lincoln Road. It has been made possible thanks to Stephen Bittel, the chairman of commercial real estate firm Terranova Corporation. Terranova announced the completion of a lease deal for a 3,625-square-foot space for art retailer Lumas Art on Lincoln Road, which will hopefully drive similar, culture-related more leases.

“We are happy to continue to bring new activity and investment to Lincoln Road, which is a unique gem in Miami Beach,” said Bittel. “The Miami Beach market remains strong and positioned for continued growth considering the ongoing migration of local and new-to-market businesses, residents, and tourists to the area.”

There’s even a BIA near the White House, believe it or not. The Golden Triangle is the heart of DC’s business district, stretching from the front yard of the White House to Dupont Circle, covering 169 blocks of businesses. With the obvious foot traffic of tourists coming to the area year round, the Golden Triangle Business Improvement District accommodates them by offering guides to restaurants, bars and walking tours, while managing littering, providing outdoor music, and with a recently launched program called Grow Golden, which aims to accelerate recovery efforts from the pandemic.

The initiative connects restaurants, creatives, and entrepreneurs in Washington with pop-up retail space in 15 selected vacant spaces. “Under Mayor Muriel Bowser’s leadership, the district is recovering from the impact of the COVID pandemic and small businesses are no exception,” said Leona Agouridis, Executive Director of the Golden Triangle BID. It ties into a trend that almost every BIA is hopping on. “As everyone returns to the office, we are thrilled to bring in new pop-ups featuring unique and vibrant small businesses to enrich our neighborhood,” added Agouridis.

There are some important concerns about formal business improvement districts. They can give power to a select few, which is bound to leave a few voices out. A BIDs marketing and promotion can also drive rent increases, pricing some mom-and-pop shops out of the area. But in general, these organizations can help make local shopping areas better places to be, helping them compete against malls, their traditional retail competition, and the newfound enemy of Main St, e-commerce. Placemaking is not easy, nor is it cheap. Now that we expect unique experiences when we leave our house, business districts will likely become even more important to retailers and a powerful force helping improve our cities.