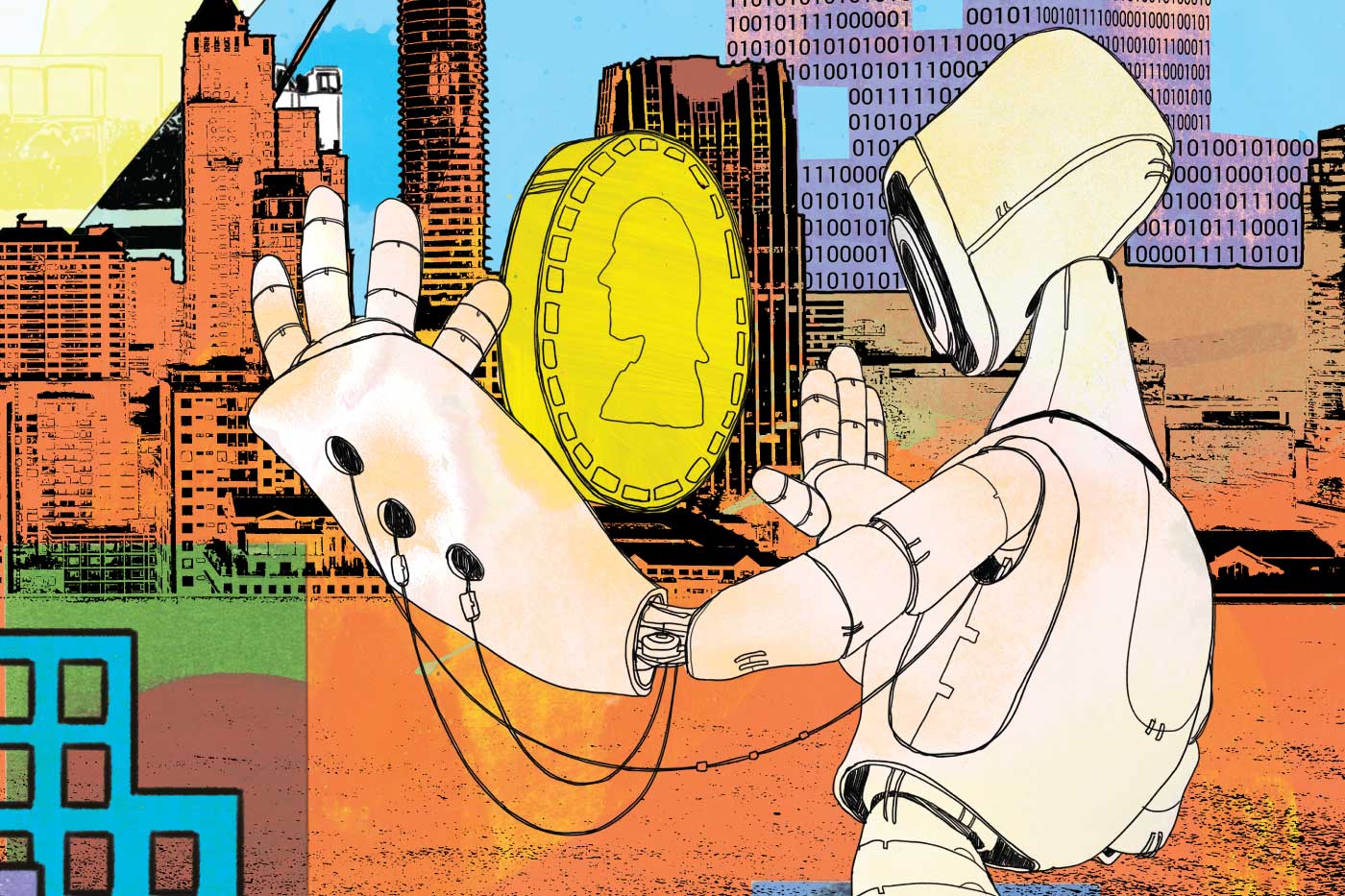 In 17th Century London, a revolutionary principle was developed that changed the way decisions were made forever. That principle, which seems almost obvious now, was groundbreaking at the time. The idea was that you can predict the future by studying patterns of the past. This revelation didn’t emerge from the ivory towers of academia or the palaces of the royal courts. Instead, it sprouted from Lloyds Coffeehouse, a popular hub of activity for sea merchants. The riverside cafe became a destination where maritime voyages were recorded. Soon, these historical records were used to help ensure accurate projections for similar journeys. The records of ledgers at Lloyds formed an early version of a predictive model that has shaped the insurance industry and established the humble coffeehouse as the original insurance conglomerate, Lloyd’s of London. Underlying this early process of predictive modeling was the desire to predict human patterns and account for anomalies. Times have changed, but that same desire is doubtlessly alive today.

The advancement in computing have exponentially increased our ability to predict the statistically significant future. As computers got faster they were able to calculate complex equations thousands of times a second, allowing multivariable equations to be solved in almost every possible variation. Now advancements in data science have created an even more powerful tool for explaining complex situations with mathematical models, artificial intelligence. AI is broadly defined as machine behavior that mimics human intelligence. In a similar fashion to how seafarers were able to deduce their journey’s risks from historical records, AI can quickly deduce patterns from data, find correlations and illuminate actionable insights. The difference is that it can do it faster, better and with much more data than even the best team of mathematicians could even dream of.

Commentary from industry pundits and newsy headlines often proclaim new technologies as a cure-all to current challenges, and it is no different with AI. AI has been hailed as the cure for almost all of the world’s ailments. But, software that is taught to think like a human still needs human help and often can’t outperform a skilled and trained human at the same task. The investment world has long touted artificial intelligence as the way to “beat the market,” but the performance of so called quant traders have yet to prove that you can design an algorithm that can always understand something as complex as the global economy.

AI has been thrown around as a fix for some of the problems in the real estate industry but the highly relational nature of large, complicated transaction and hands on management need for these physical assets make that unlikely. But, beyond the buzzwords and shiny-toy appeal of AI, its sophisticated technology offers some promising applications for the commercial real estate industry. Possible uses of AI range from financial modelling, risk assessment, recommendation tools to personalized marketing. The use of AI has grown 270% within four years, according to Gartner. As AI transitions from a pleasant addition, to an essential part of an investment management toolkit, the path towards AI automation is inevitable.

Real estate firms have access to a lot of data, but often find it challenging to tease tangible insights from their trove of information. With AI, data analysis becomes a background activity and only takes a fraction of time compared to protracted manual analysis. If cleverly deployed, AI can untangle opaque data into tangible insights, repeatedly, constantly. The result is saved time, minimized costs and valuable visibility of existing information. There are many ways to analyse known connections between data that don’t need AI. But if you want to find new connections, ones that have never been made before, you will need the computing help of artificial intelligence (along with some good, old fashioned human intelligence along side of it).

Automation assists in the decision making process and helps investment practitioners make informed decisions. Features like on-demand reporting give an accurate picture of the latest trends and helps professionals identify the current state of affairs within their organization or portfolio. Firms are able to identify secondary market opportunities or the investment readiness of growing neighbourhoods through automated insights. But to do so, they need to have good data. It was, after all, the shipping logs that helped transform Lloyd’s Coffeeshop into Lloyd’s of London.

Unfortunately, real estate companies don’t have all of the data they need recorded into one log. Instead they have to consolidate it from dozens if not hundreds of sources. Dr. Ron Bekkerman is CTO of the real estate analytics platform Cherre. They use AI to bring the data from multiple sources together, which creates a built-in verification system to test validity. “One of our primary value propositions is our ability to draw information from public, private and proprietary—often client-specific and internal—sources, and then resolve that data, Bekkerman said. “We most often do that through the use of triangulation. For instance, there may be ten sources of data on a specific asset, with nine in agreement and only one outlier. In that case, it is overwhelmingly likely that the nine sources in agreement are accurate. Over time, we create a weighted majority voting system, supported by our deep domain expertise, to incorporate the level of our trust in the accuracy of various data sources.”

When it comes to using predictive analytics, a term that gets used a lot is “garbage in, garbage out.” In a sense, AI is what it eats. AI’s effectiveness and use in real estate investment management hinges on the availability, organization, and usefulness of the data fed into its models. AI is able to make previously unseen connections by creating a relationship map. But these maps can quickly crumble if the data behind them is corrupted or wrong. Plus, for AI to be able to make unforseen connections, it often needs previously unused sources. As AI grows more popular in investment management, it is increasingly important to consider which information isn’t available and how that impacts the overall formulation of a system’s output of information. If all data provided creates a clear picture, does the exclusion of certain types of data mean that the picture construed is incomplete, or is it an inaccurate reflection of the actual scenario?

Though the advantages of artificial intelligence are mostly discussed in terms of its technical capability, AI also enables the redirection of human resources and empowers companies to unlock the potential of their workforce to the fullest.

“Alternative data” is what the investment industry calls information that was previously not used in their analysis. Right now, this can include demographic information, seasonal changes, or even the name of a building, all of which might have some connection to value. It won’t be long, I suspect, until the term “alternative data” gets abandoned. When AI is able to find even the most unexpected connections, all possible information will be useful, and no data will be considered “alternative.”

Once the data is together, another big benefit of AI is that it can automate the analysis process so investment managers can keep their focus towards critical operations. In the 2020 CRE Innovation Report from the Altus Group, two-thirds of respondents agreed that automation would enable people to focus on value-added work. As firms invest in emerging technologies, they free up their workforce to concentrate on specialist capabilities that put them at a competitive advantage. Though the advantages of artificial intelligence are mostly discussed in terms of its technical capability, AI also enables the redirection of human resources and empowers companies to unlock the potential of their workforce to the fullest. Rather than replacing workers, it can help take some of the “heavy” data lifting off of their hands, so they can better focus their time on things that require higher cognitive capabilities.

The road to full AI automation won’t happen overnight. In fact, we are only witnessing the first steps down the road to adoption as companies invest in and experiment with semi-automated AI. These semi-automated AI systems will grow in popularity because they provide some of the benefits of automation and allow investment managers to tread into the waters of AI. But eventually, they will be replaced by their more advanced, fully automated counterparts.

So, it sounds great to say that artificial intelligence provides fresh insights for investment managers, but it should be said that professional expertise still needs to guide and mold how AI fits into an organization. Since no two firms are identical, there is no such thing as a turn key AI solution. Investment managers need to understand their organization, their personnel, and their goals in order to fully integrate a technology as advanced as AI into their business model. AI is not just a flashy gimmick. Yes, it promises a new vision and approach to investment management in real estate. But, it also needs to be adopted at the core of a company, not just used a patch for a fundamentally flawed operation.

As predictive analytics have evolved over centuries, its next phase will be influenced by the adoption of AI. The current phase of AI in investment management enables automation while permitting opportunities for semi-automated human intervention. Some intervention is required to give users a sense of empowerment and orient the transition into this phase of technology.

Several factors must be in alignment for AI to flourish in real estate investment management: timing, demand, technology, and processes. We can look to the past to try and predict what the future holds of AI in real estate, but just like the seafarers at Lloyds, it’s not always so straightforward. History is fraught with inventions that were thoughtful and inventive but debuted at the wrong moment, only to be revered as a commonsense solution decades later. Trends indicate that there is a growing appetite for AI, and this demand is also evident in every aspect of commercial real estate. The technology must work in tandem with the industry’s readiness to adopt AI. At the moment, that means that the industry will have to move at the accelerating pace of change that technology has brought about.

The future evolution of AI in real estate will need to learn from the lessons of the past. Computing advancements are allowing companies to predict the future like never before, but correlation does not always mean causation. Important factors might not have been considered at all. Even Lloyd’s of London, the original masters of predictive analytics, were famously caught off-guard by an unexpected externality. Many of the properties that they insured in the 1960s were found to have a cancer-causing fireproofing material called asbestos. The claims generated from this carcinogenic mineral caused losses to Lloyd’s investors that almost brought the company to its knees. Sure, AI might have been able to help Lloyd’s of London and other insurers price litigation risk into their policies, but it is unlikely that it could have known the dangers of a product that was once seen as benign. The only certainty is uncertainty. The future is incredibly hard to predict. This is exactly why AI has so much potential. In order to make the big, risky decisions that the commercial property industry is responsible for every day, we need all the help we can get.