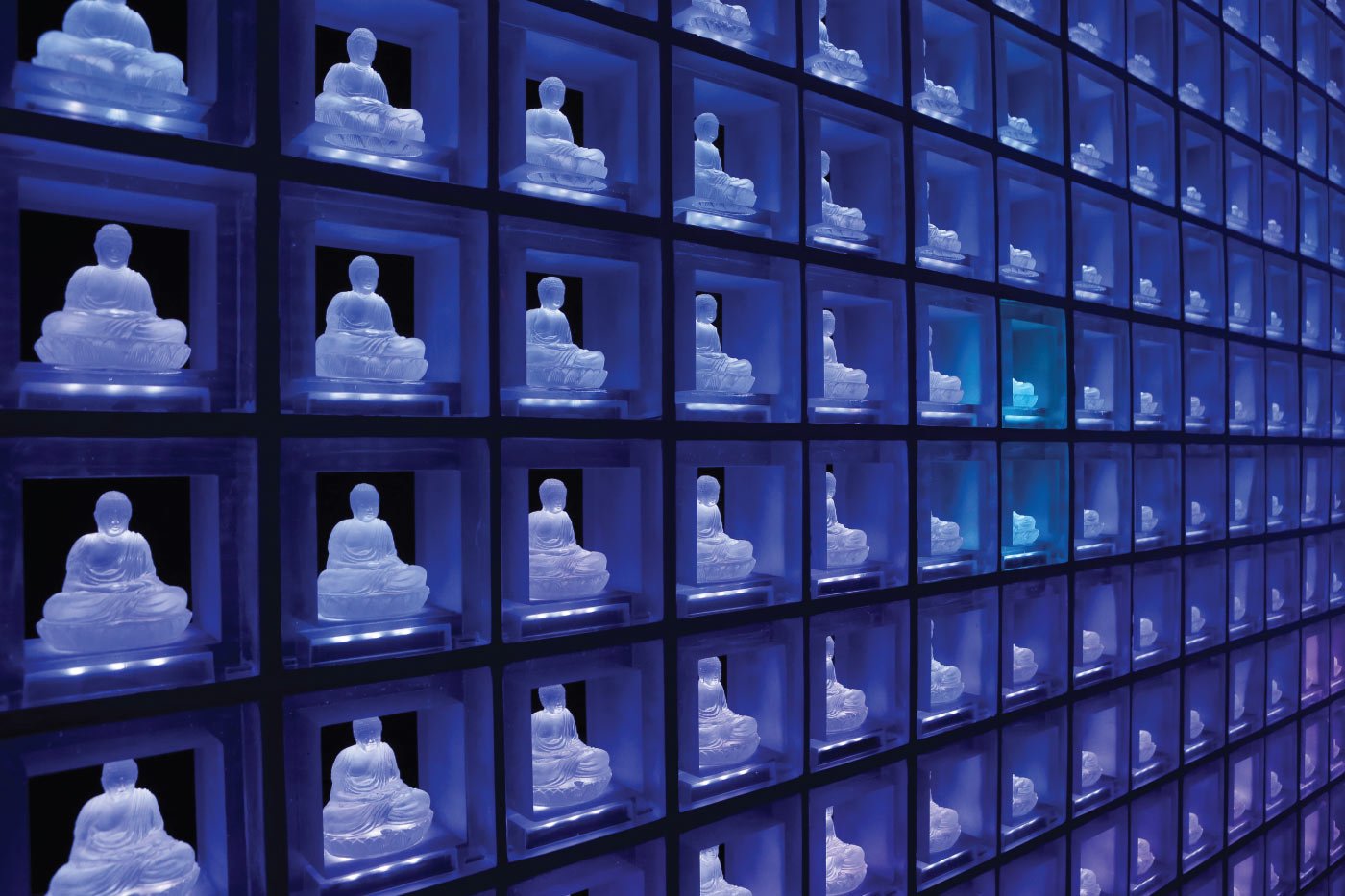 Long before COVID-19 claimed the lives of over 478,320 people globally, both architects and scientists were exploring solutions to lay people to rest. As the pandemic’s death toll continues to rise, thousands of families face an untimely tragedy along with the emotional and financial distress that come along with it. Unbeknownst to them, our beloved deceased are increasingly difficult to put to rest. Many cities, like Hong Kong, New York, and London, have been struggling (for some time now) to find usable burial space. The problem is larger than individual families, larger than individual cities, too. The problem of how and where to bury our dead is global, and it requires innovation to provide solutions that are environmentally sustainable, culturally appropriate, and economical in terms of both physical space and money.

Innovative companies are creating alternative solutions to take the place of traditional burials. Eterneva and Lifegem offer a way to transform the ashes of both humans and pets into a real, lab-grown diamond, which can then be worn as a piece of jewelry and takes up almost no physical space. But it isn’t cheap. Depending on the carat size, color, and cut, these diamonds can range from $3,000 to $50,000, and that doesn’t include the cost of cremation. And while cremation is cheaper than burial and takes up less space, both still pose environmental problems.

Burials can be taxing on the environment because the chemicals used during the embalming process can seep into the ground overtime. Similarly, modern caskets made of chemically treated materials and metals take a very long time to break down, all the while the surrounding land is absorbing toxins that eventually end up in the water table. Cremation isn’t much better. It requires high levels of energy generated from burning fuels (and in some places wood), and it also contributes to Mercury emissions from dental fillings. So what are some of the alternatives?

Green burials have begun growing in popularity thanks to the Green Burial Council (GBC), which has established standards to protect the environment by eliminating the use of toxic chemicals and non-biodegradable burial materials, allowing for natural decomposition to take place. The council also supports sustainable land management efforts, limiting the number of burials per acre, and provides lists of cemeteries that are GBC certified. While this method is better for the environment, it still requires the use of land, in some places throughout the world, the geological composition of the land makes it unfit for burial.

The island of Svalbard, Norway is located within the arctic circle. Thick layers of permafrost make burials nearly impossible, leading to a widespread rumor that it’s illegal to die there. While dying is, of course, allowed, burial, on the other hand, is not because the permafrost prevents the body from properly decomposing. Instead, bodies and other organic matter are actually preserved within the permafrost, creating a potential biohazard in recent years, thanks to global warming. Temperatures have caused remains to thaw, and in Siberia, for example, an anthrax outbreak was linked to a thawed reindeer carcass as the probable cause. For the island’s residents that are near death, they are encouraged to live out their days on the mainland as their body will end up there regardless.

In New Orleans, where the low sea level and frequent flooding present a floating body biohazard, traditional burials are not allowed. Instead, bodies are placed in above ground tombs which trap heat inside and allow the body to decompose over the course of about a year in the hot, subtropical climate, a process that’s akin to an “extended cremation.” Bones are all that remains once the process is complete, allowing the tomb to be reused over and over. Entire families can use the same burial place, and each person’s bones are swept into a trap in the floor of the tomb. Because each tomb is reused, less space is required, and it might be possible for families to split the costs. Environmentally speaking, this process would undoubtedly be less harmful if bodies are not embalmed with toxic chemicals and placed in biodegradable shrouds rather than coffins. The only drawback to above ground tombs is that they are restricted to consistently hot climates that allow the bodies to naturally decay in the shortest amount of time.

Different models for above ground burials have been explored like the San Cataldo Cemetery in Modena Province of Italy, built in 1972. Well-known in architectural circles as one of the first examples of postmodernist design, the property was also ahead of its time in terms of using space economically to house the dead. Plots are stacked vertically on top one another, similar to how safety deposit boxes are set up, but with openings in the exterior walls to allow for natural light. The cemetery remains incomplete, though, because construction was halted in 1976 when the architect, Aldo Rossi, suffered an injury from a car accident and could no longer pursue the development. While the buildings that make up the cemetery are sprawled across a rural setting, similarly designed vertical cemeteries exist throughout the world in more densely populated, urban spaces.

The Memorial Necrópole Ecumênica in Santos, Brazil resembles an average mid to high-rise commercial building. From the outside, it’s difficult to tell that the building is a cemetery designed to house nearly 25,000 dead. In Hong Kong the Pok Fu Lam Cemetery resembles the farming terraces of Machu Picchu. The cemetery is built into the hillside in the form of ascending rows of concrete jam-packed with headstones. Throughout the world, stacked, or vertical cemeteries exist out of necessity, because the land is either not available or not suitable for burials.

The Japanese also have a very Japanese version of a high-density cemetery alternative, complete with smart access cards and LED lights that change the digital tombstone’s color when visited. Although the head Buddhist priest at the Koukoko-ji temple in Japan did admit that the central idea of burial space is to provide a resting place where people without children or large families so they will not feel alone in the afterlife. True to this, he says that the majority of plots are purchased by people with no kin that want to “be surrounded by others like them[selves].”

In 2015, Procedia Engineering featured a peer-reviewed article that analyzes existing vertical cemetery designs in accordance with the burial rituals of several religions. The author Wayhu P. Hariyono proposes a vertical cemetery design template featuring different uses, or “types,” for each floor of the building. The floor types are designed to accommodate different religious preferences. These types include floor burials (non stacked), wall burials, sky burials (on the rooftop), and even makes use of the land below the building by raising it on pilings for traditional ground burials. His plans also include one level dedicated to a crematorium facility, as well as columbariums to house urns. The building features both indoor and open outdoor space with greenery, making it feel more like the cemeteries we are used to. Depending on where the building is located and the demographics of those using it, the floors can be replicated or eliminated as needed. Hariyono provides vertical cemetery examples for different cities around the world, adjusting the floor types in his template based on the context of each city.

Building up rather than down could be a viable option for densely populated cities who no longer have the space to go six feet under. But what if there was a “death-as-a-service” business model that eliminated the entire need to house the dead altogether—no coffins, no tombs, no ashes, no urns, no cemeteries, no burials—simply returning to the place from whence we came (or rather, the place that nourishes the place from whence we came). Dust to dust, or something like it. This is precisely the goal of Recompose, a public-benefit corporation that offers a sustainable, eco-friendly alternative to burial and cremation. Recompose’s CEO and founder Katrina Spade studied anthropology and sustainable design before earning a Master’s in Architecture. She sought to find an environmentally conscious solution for urban dwellers that have no place to bury their loved ones.

Is Energy Efficient Infrastructure No Longer a High Priority?

Spade also wanted to provide a way for people to be able to participate in laying their dead to rest without harming the environment or sacrificing land. In fact, Spade’s method actually creates more land, two wheelbarrows worth, or a cubic yard, on average per person. That’s right, Spade developed a way to turn a human body into usable soil, which can then be used by loved ones to plant a tree or small memorial garden where they can go to pay their respects. The patent-pending process, called natural organic reduction, takes place in a reusable vessel, using wood chips and aeration to accelerate the decomposition process to about thirty days. Spade has been working with state legislatures to make this process a reality, and Washington state recently passed a bill to approve this method, allowing Recompose to open its first facility. The cost for this service will be $5,500, which is more expensive than most cremations but still cheaper than a traditional burial or green burial.

Hundreds of millions of humans throughout the world are being priced out of housing markets and forced to live in informal “shanty-town” developments, or slums, and the U.S. is not exempt from this growing issue. So if this is considered an adequate way to house living, then what is acceptable for the dead? As COVID-19 cases continue to ravage the world, and the death toll nears half a million, the question of where to house the dead becomes even more dire. Unclaimed bodies in New York City were placed in individual coffins and buried in mass trenches on Hart Island. Emergency cemeteries were built in Ecuador. In Iran, a large burial pit can be seen from space.

We are living in strange times. That is apparent to both the living and the dead. It is also apparent that we need solutions to accommodate final resting places for our loved ones that pass on. We need solutions that are sensitive to different religious practices, environmentally sustainable, and economically feasible. I am not so naive to think there is an easy answer, but I know that housing both the living and the dead is something that needs our focus and attention to provide more accessibility through affordable options. After all, we’ve got enough to worry about while we are alive; in death, we should at least be able to finally rest in peace.