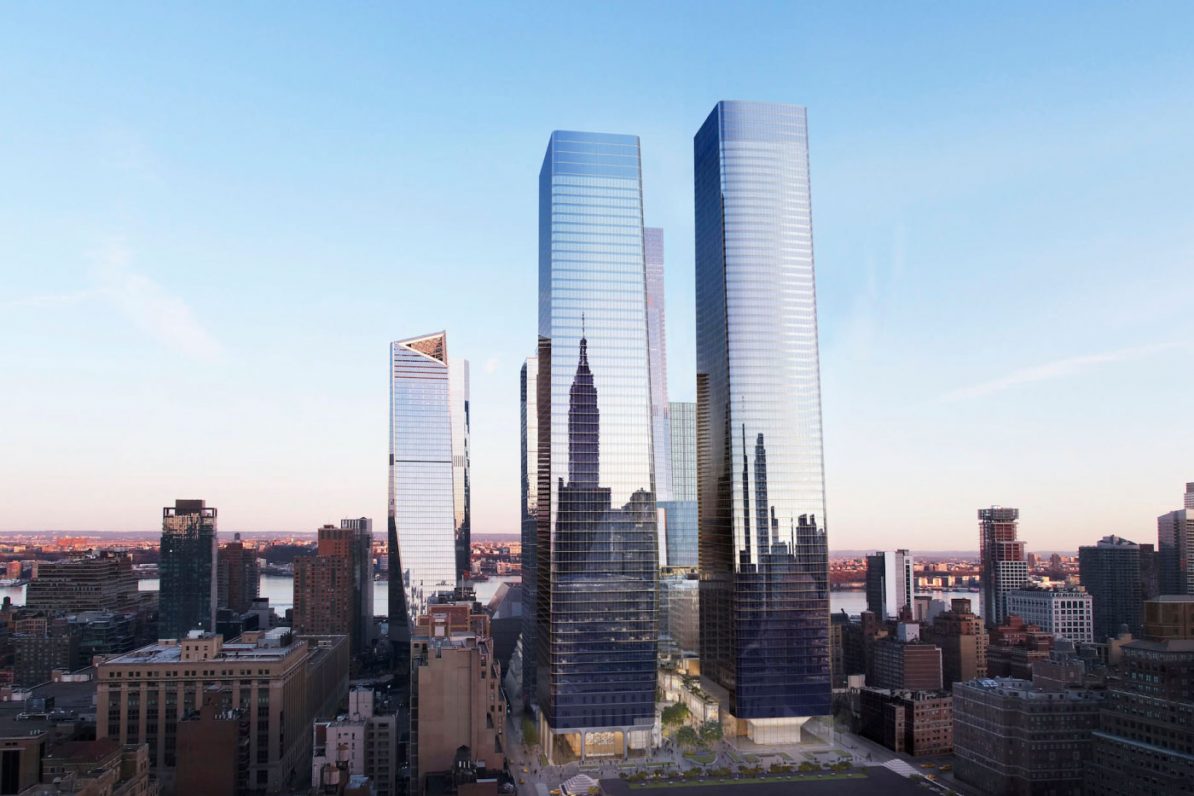 You’ll see no shortage of amazing things if you tour Brookfield Properties’ Manhattan West development in New York City. The view of the city from Brookfield’s marketing suite in One Manhattan West on the 52nd floor is stunning. When I walked into the suite, a Brookfield spokesperson pulled up the curtains covering the floor-to-ceiling windows, giving a breathtaking view of the city as the late afternoon sunlight shone through. Later, we toured Magnolia Court, the 2.5-acre pedestrian plaza that functions as a courtyard in the center of the development. It features 225,000 square feet of retail space, including Peloton’s flagship retail store, where they film their workout sessions. The courtyard is also earmarked for arts and culture events throughout the year.

Manhattan West is a 7-million-square-foot mixed-use development that spans 8 acres and features four office towers, a boutique hotel, a residential building, and the aforementioned retail space and public plaza. The project was mostly completed in 2021 and held its grand opening in September 2021, kicked off with a concert featuring hip-hop icons Questlove and The Roots and lots of fanfare.

Manhattan West functions as an urban oasis amid the hustle and bustle of the west side of Manhattan near Penn Station. A Brookfield spokesperson told me the firm intended it to be that way: a welcoming area for New Yorkers and tourists and a space for community. The National Hockey League has its headquarters in One Manhattan West and also its flagship retail store there, bringing the Stanley Cup around every so often for fans to see. And in the wintertime, a section of the plaza is sometimes converted into an ice rink, and New York Rangers players stop by for an appearance and to sign autographs.

What’s not visible to the naked eye about the Manhattan West development may be the most crucial aspect. One Manhattan West, the 67-story, 2.1-million-square-foot flagship office tower, is the first building in Brookfield’s New York portfolio to be powered 100 percent by renewable energy. Brookfield Properties announced a five-year agreement with its sister company, Brookfield Renewable Partners, earlier this year to supply renewable energy. Brookfield Renewable owns 70 hydropower plants and 3 wind farms in upstate New York with the capacity to generate about 900 megawatts of electricity. The company says the agreement is one of the largest in-state renewable energy deals for a single building in New York.

How Brookfield will track carbon emissions in One Manhattan West is also intriguing. The company is working with the startup ClearTrace to use a blockchain verification platform that’ll enable investors, tenants, and government agencies to see near real-time data analytics of energy sources consumed at the mega-office tower. Brookfield was one of ClearTrace’s early investors in the Austin-based startup that launched in 2019. Using ClearTrace’s technology, Brookfield can track energy consumption in One Manhattan West hour by hour and by the source of electricity. This allows them to understand the energy usage of each tenant.

Michael Daschle, Senior Vice President, Operations at Brookfield Properties, said the tech will help the company comply with proposed Securities and Exchange Commission climate disclosure rules. “The main thing is investors want to know that public net-zero claims can be backed up with evidence,” he said. “We want to verify our ESG claims, and that’s where this blockchain technology comes in.”

Without the technology, Daschle said it’s challenging to gain insights into energy consumption and supply, and building owners often have to rely on reports from their utilities that only go back a year or two. “This model with the blockchain we’re using with One Manhattan West, we’ll use it with other assets,” he told me. Relying on a renewable energy supplier with hydropower in upstate New York makes decarbonization efforts easier for One Manhattan West. Daschle said building owners who just pull energy from New York City’s electric grid accept the grid’s renewable mix, which is improving but still not entirely green.

Daschle said One Manhattan West, certified as LEED Gold, doesn’t have near-term exposure to New York City’s Local Law 97. The mammoth office tower is efficient enough to avoid fines for the first compliance date of 2024, but they may have exposure for 2030. “It depends on the carbon co-efficient for 2030,” Daschle explained. The carbon co-efficient is the emissions limit buildings must meet depending on their occupancy classification. Buildings that exceed these limits could be subject to penalties. By 2030, Daschle said it’s expected that 70 percent of the NYC grid will come from renewable energy, so the carbon co-efficient should change, thus lowering many New York City buildings’ exposure to penalties.

Brookfield isn’t the only company using blockchain tech to track carbon emissions and energy consumption. Firms like JPMorgan Chase, the nation’s largest bank, plans to use ClearTrace tech to monitor and certify renewable energy use at their New York properties as part of their 5-year plan to decarbonize all of their New York real estate assets. JPMorgan and Brookfield Renewable Partners also announced in 2020 a 5-year deal to power more than 500 of the bank’s New York buildings with renewable energy.

Lincoln Payton, ClearTrace’s CEO, said his company’s technology helps collect the type of data needed for a better regulatory landscape. “The quality of data is essential,” Payton told me. “You can’t make good decisions in the energy field without good data. The world needs more climate regulations, and whatever they end up being, you can’t comply with those regulations without having the best data measurements.”

Right now, meters are collecting all the energy data from One Manhattan West from every source, from the transmission to consumption. The data is then digitized on the blockchain ledger, and each block of data about the energy is given a unique ‘birth certificate’ that includes all the information you’d ever want to know. “The great thing about blockchain is once it’s recorded, it can’t be tampered with, and it’s there forever,” Payton said. The process is entirely automated and human-free.

Originally from London and with the accent to prove it, Payton spent most of his career in finance, specifically energy investment banking. He saw the emerging ESG world and the fact that most buildings don’t track energy data today as validation of the company’s mission.

Buildings can use Renewable Energy Credits (RECs) to offset their carbon emissions, but not all credits are created equal. Also known as ‘green tags,’ RECs are certificates issued when one megawatt-hour of electricity is generated and delivered to the grid from a renewable energy source. The electricity building owners and consumers receive through the grid typically say nothing of how it was generated, so RECs play an important role in accounting and tracking renewable energy generation and use.

Payton explained that the blockchain technology goes a step further than green tags. “All our thought processes in the past with energy use was to give credit to a building for any green thing they did,” he said. “But the studies show the old way wasn’t changing the world. We need technology that can prove that buildings are using green energy.”

Proving green energy claims is vital because ESG investing and net-zero claims have been increasingly criticized and under scrutiny lately. The European offices of Deutsche Bank’s DWS unit were raided by police in May in a greenwashing investigation, with authorities saying they found evidence that could support allegations of fraud. The SEC announced in June an investigation of Goldman Sachs for claiming some of its funds were sustainable when they were apparently far from it. In Europe and the U.S., regulators are working on standards where companies will be obliged to tell the truth about carbon emissions and their net-zero plans or face penalties if they don’t. The SEC’s climate disclosure rules are still a proposal for now, but the message from many governments is clear that more disclosure rules could be coming.

Some investors and financial pundits are also turning against ESG in droves. ESG criticism has grown louder since Russia’s invasion of Ukraine and the revelations that ESG funds had at least $8.3 billion allocated to Russian government bonds and companies as of March 16th. That figure is small compared to the roughly $2.7 trillion devoted to ESG funds globally, but it added more fuel to the fire for critics. EY said in a new report that ESG investing is facing a “make or break” moment as it grapples with the lack of standardization, regulation, and a standard definition and purpose. Payton of ClearTrace indicated that the “greenwashing” claims are indeed dire for investors and real estate firms. “Greenwashing can get you fired nowadays,” he said. “The world will come down very hard on you for it.”

Emissions tracking tech can solve a big piece of the puzzle in real estate decarbonization efforts and in proving ESG claims, especially in the absence of regulations from the SEC that are still pending. Payton says tracking emissions on the blockchain works as an “anti-greenwashing technology.” Brookfield’s use of 100 percent renewable energy and blockchain technology, then, may save it from an angry mob of ESG haters and also set it up for success in compliance with a variety of climate regulations coming soon.

A leg up on the competition

Many major players in the commercial real estate industry say complying with a critical piece of the SEC’s proposed emissions reporting rules is too difficult. Industry groups like Real Estate Roundtable and the Commercial Real Estate Finance Council have written comments to the SEC advocating against individual companies being mandated to report carbon emissions generated by certain building materials or tenants, which is an essential aspect of the rule. Some industry groups believe reporting so-called Scope 3 emissions should be optional, while others say real estate firms shouldn’t be held liable for the reporting accuracy as long as they disclose the figures in good faith.

For example, JLL executives wrote in comments that they support the SEC proposed regulations, but they should provide more time before companies are required to report emissions. “Taking a penalizing approach creates headwinds toward the overarching objective of driving progress on sustainability,” JLL’s chief sustainability officer said in written comments. Reading some real estate firms’ objections to the SEC rule is interesting in light of hearing about Brookfield’s use of blockchain technology to track emissions and energy consumption. Presumably, the use of the technology could help the property industry comply with SEC’s proposed rules and could be a competitive advantage over those that don’t.

Manhattan West is an impressive mixed-use development for several reasons, and it’ll be enjoyed by New Yorkers, office tenants, and tourists for many years to come. But more importantly, Brookfield’s efforts to make the development as climate-friendly as possible may set an example for other real estate firms looking to decarbonize assets. Not every building owner has access to its own massive store of renewable energy power generation because, well, not every building owner has a parent company that’s one of the world’s largest alternative investment management companies.

But landlords should consider using technology like carbon emissions tracking on the blockchain to comply with regulations and better understand their footprints. The views from One Manhattan West are spectacular, and the public plaza is a respite from the frenzied Manhattan streets, but beyond the externals, the forward-thinking sustainability initiatives at the development could be the thing real estate professionals should take the most notice of.