Every new technology goes through a hype cycle but few become victim to their own overhyping like 5G has. We were promised a new generation of wireless connections, one that could boost our download and transfer speeds tenfold and be robust enough to connect giant networks of autonomous flying cars and robots on hoverboards. But this proved to be little more than a marketing ploy. Phone makers falsely touted their 5G capabilities, Sprint and AT&T even had to settle a false advertising lawsuit over this. And even when phones became 5G compatible there were few networks that could even support them. One of the world leaders in 5G networks, South Korea, had even seen many of its 5G subscribers switched back because they didn’t see enough of a difference to be worth the extra price.

Even though we might have all fallen for this first pump fake doesn’t mean that we won’t get there eventually. Digital technologies often take a while to get into the mainstream because of the chick/egg connection between increased capacity and market demands. Think back to when 3G networks first switched to 4G. Many phones didn’t even have the capability to stream video. Now, most applications we use auto-stream content because they are so sure that we have the bandwidth to do so. Right now, we consume information at a level that is supported by 4G wireless, but once 5G whets our appetite for more data-heavy formats like 4K movies or 3D virtual reality scenes it won’t be long until it feels like we could not live without it.

While this is all fine and good for the average person who has little more to do than upgrade their phone in order to make the jump into the 5G realm, for the property industry it is much more of a pressing matter. Many building owners are making decisions about how information will move through their properties, creating networks that will hopefully keep its occupants happy for decades to come. If the wrong decisions are made now and 5G becomes the standard that many telecom experts think it will, many buildings might find themselves having to replace systems that seemed cutting edge just a few years before.

Understanding why 5G is so important for buildings requires first a short explanation about the technology itself. To do so it helps to remember back to the last time you were not able to sleep because a neighbor was having a party. The thing likely keeping you up, the noise that pushes you to yell out the window or bang on the ceiling, was a low-frequency sound, the bass from the music or the thuds of foot traffic. The reason for this is that low-frequency sounds have a longer wavelength and are therefore better at traveling through dense materials like wood or metal. 5G internet is able to deliver so much information because it is an incredibly high frequency, meaning that it has a very short wavelength and therefore does not travel well through buildings.

One of the people that has likely analyzed more buildings for their ability to transmit signals than anyone else is Arie Barendrecht. He is the CEO and Founder of WiredScore, the company behind Wired Certification, the only internationally recognized digital connectivity rating system for commercial real estate. He thinks that in only two to three years there will be an expectation from tenants that their buildings should deliver 5G speeds. “Buildings will have to create their own internal 5G networks because they won’t be able to get it from the outside network,” he says. “Low-E glass is one of the best insulators from the 5G coverage, and if a building is over 15 stories, it gets worse,” he said.

Arie has worked to make 5G compatibility one of the criteria for their building scores. He worries because wireless infrastructure is not something that most landlords, developers or architects place high on their priority lists right now, but they can carry a cost of “one to five million dollars.”

Even when new developments and retrofit projects factor in wireless communication, it is all too easy for the budget to get diverted somewhere else. “Developers start off wanting the smartest building possible,” he said. “After round after round of changes to the building design plans, it becomes too easy to value-engineer out highly critical connectivity infrastructure from the plan to create more space for physical amenities.” Arie predicts that companies that implement non-5G compatible distributed antenna systems will have to replace them in a few years or risk seeing tenants break their leases. Not only are many companies requiring more and more as far as speed and bandwidth go, the cost of downtime is increasing exponentially as advanced processes become cloud-based and automated.

If we see 5G adoption as an inevitability, then we have to prepare our buildings accordingly. Creating building systems with high speed fiber backbones and converged, secure networks is the only way to keep up with the demand that is coming down the pipe, or cable as in this example. Not buying into hype is important for making informed technology decisions, but disregarding the impact of a technology because it is being hyped could turn out to be an even more expensive mistake. 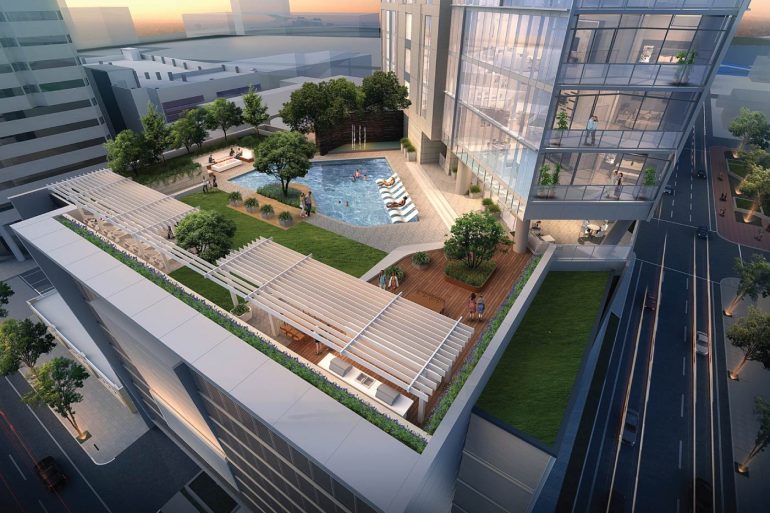